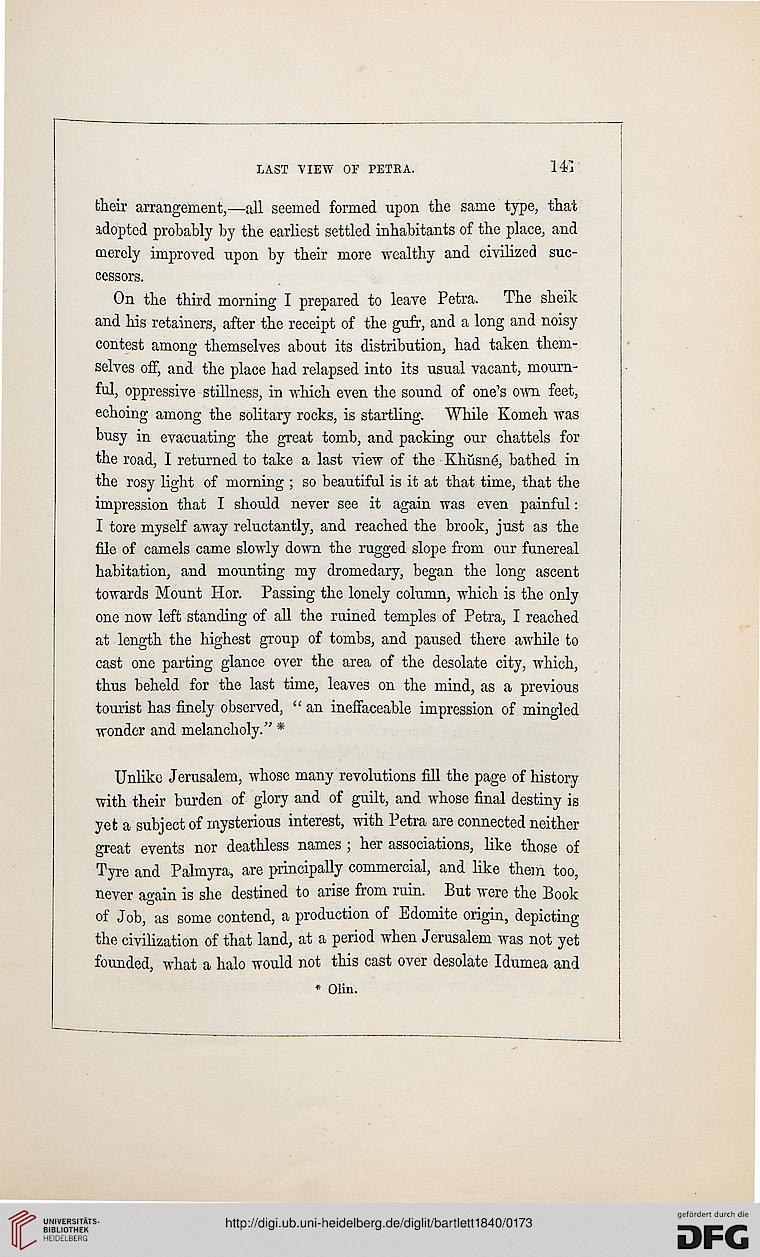 their arrangement,—all seemed formed upon the same type, that
adopted probably by the earliest settled inhabitants of the place, and
merely improved upon by their more wealthy and civilized suc-
cessors.

On the third morning I prepared to leave Petra, The sheik
and his retainers, after the receipt of the gufr, and a long and noisy
contest among themselves about its distribution, had taken them-
selves off, and the place had relapsed into its usual vacant, mourn-
ful, oppressive stillness, in which even the sound of one's own feet,
echoing among the solitary rocks, is startling. While Komeh was
busy in evacuating the great tomb, and packing our chattels for
the road, I returned to take a last view of the Khusne, bathed in
the rosy light of morning ; so beautiful is it at that time, that the
impression that I should never see it again was even painful:
I tore myself away reluctantly, and reached the brook, just as the
file of camels came slowly down the rugged slope from our funereal
habitation, and mounting my dromedary, began the long ascent
towards Mount Hor. Passing the lonely column, which is the only
one now left standing of all the ruined temples of Petra, I reached
at length the highest group of tombs, and paused there awhile to
cast one parting glance over the area of the desolate city, which,
thus beheld for the last time, leaves on the mind, as a previous
tourist has finely observed, " an ineffaceable impression of mingled
wonder and melancholy." *

Unlike Jerusalem, whose many revolutions fill the page of history
with their burden of glory and of guilt, and whose final destiny is
yet a subject of mysterious interest, with Petra are connected neither
great events nor deathless names ; her associations, like those of
Tyre and Palmyra, are principally commercial, and like them too,
never a^ain is she destined to arise from ruin. But were the Book
of Job, as some contend, a production of Edomite origin, depicting
the civilization of that land, at a period when Jerusalem was not yet
founded, what a halo would not this cast over desolate Idumea and