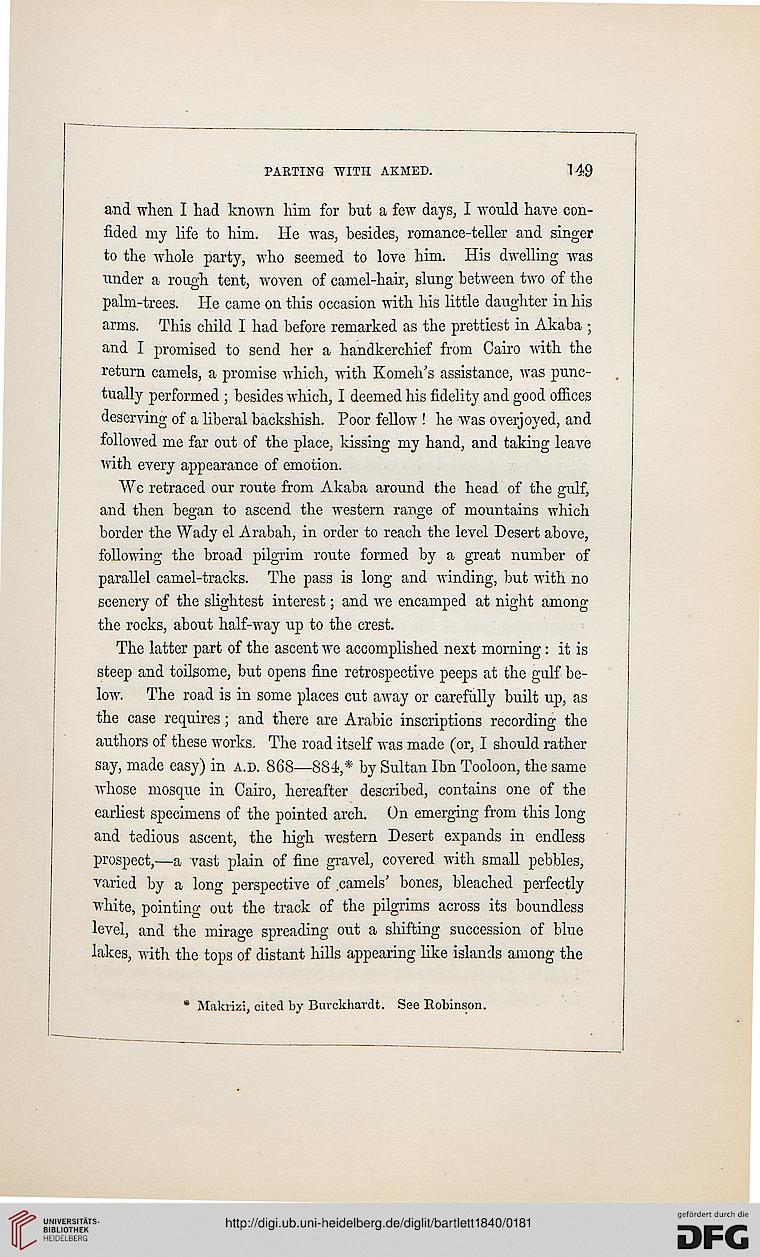 and when I had known him for but a few days, I would have con-
fided my life to him. He was, besides, romance-teller and singer
to the whole party, who seemed to love him. His dwelling was
under a rough tent, woven of camel-hair, slung between two of the
palm-trees. He came on this occasion with his little daughter in his
arms. This child I had before remarked as the prettiest in Akaba ;
and I promised to send her a handkerchief from Cairo with the
return camels, a promise which, with Komeh's assistance, was punc-
tually performed ; besides which, I deemed his fidelity and good offices
deserving of a liberal backshish. Poor fellow ! he wTas overjoyed, and
followed me far out of the place, kissing my hand, and taking leave
with every appearance of emotion.

We retraced our route from Akaba around the head of the gulf,
and then began to ascend the western range of mountains which
border the Wady el Arabah, in order to reach the level Desert above,
following the broad pilgrim route formed by a great number of
parallel camel-tracks. The pass is long and winding, but with no
scenery of the slightest interest; and we encamped at night among
the rocks, about half-way up to the crest.

The latter part of the ascent we accomplished next morning: it is
steep and toilsome, but opens fine retrospective peeps at the gulf be-
low. The road is in some places cut away or carefully built up, as
the case requires; and there are Arabic inscriptions recording the
authors of these works. The road itself was made (or, I should rather
say, made easy) in a.d. 868—884,* by Sultan Ibn Tooloon, the same
whose mosque in Cairo, hereafter described, contains one of the
earliest specimens of the pointed arch. On emerging from this long
and tedious ascent, the high western Desert expands in endless
prospect,—a vast plain of fine gravel, covered with small pebbles,
varied by a long perspective of camels' bones, bleached perfectly
white, pointing out the track of the pilgrims across its boundless
level, and the mirage spreading out a shifting succession of blue
lakes, with the tops of distant hills appearing like islands among the