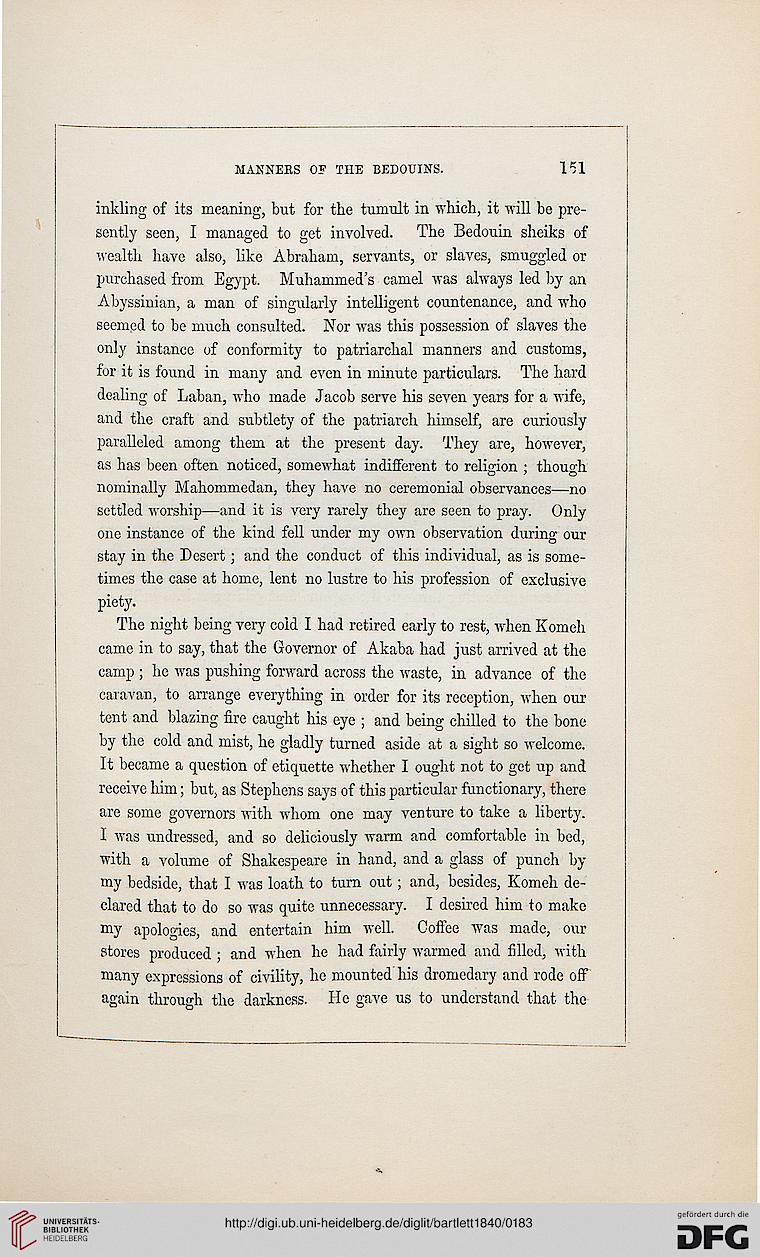 Information about OCR text
MANNERS OF THE BEDOUINS. 151

inkling of its meaning, but for the tumult in which, it will be pre-
sently seen, I managed to get involved. The Bedouin sheiks of
wealth have also, like Abraham, servants, or slaves, smuggled or
purchased from Egypt. Muhammed's camel was always led by an
Abyssinian, a man of singularly intelligent countenance, and who
seemed to be much consulted. Nor was this possession of slaves the
only instance of conformity to patriarchal manners and customs,
for it is found in many and even in minute particulars. The hard
dealing of Laban, who made Jacob serve his seven years for a wife,
and the craft and subtlety of the patriarch himself, are curiously
paralleled among them at the present day. They are, however,
as has been often noticed, somewhat indifferent to religion ; though
nominally Mahommedan, they have no ceremonial observances—no
settled worship—and it is very rarely they are seen to pray. Only
one instance of the kind fell under my own observation during our
stay in the Desert; and the conduct of this individual, as is some-
times the case at home, lent no lustre to his profession of exclusive
piety.

The night being very cold I had retired early to rest, when Komeh
came in to say, that the Governor of Akaba had just arrived at the
camp ; he was pushing forward across the waste, in advance of the
caravan, to arrange everything in order for its reception, when our
tent and blazing fire caught his eye ; and being chilled to the bone
by the cold and mist, he gladly turned aside at a sight so welcome.
It became a question of etiquette whether I ought not to get up and
receive him; but, as Stephens says of this particular functionary, there
are some governors with whom one may venture to take a liberty.
I was undressed, and so deliciously warm and comfortable in bed,
with a volume of Shakespeare in hand, and a glass of punch by
my bedside, that I was loath to turn out; and, besides, Komeh de-
clared that to do so was quite unnecessary. I desired him to make
my apologies, and entertain him well. Coffee was made, our
stores produced ; and when he had fairly warmed and filled, with
many expressions of civility, he mounted his dromedary and rode off
again through the darkness. He gave us to understand that the