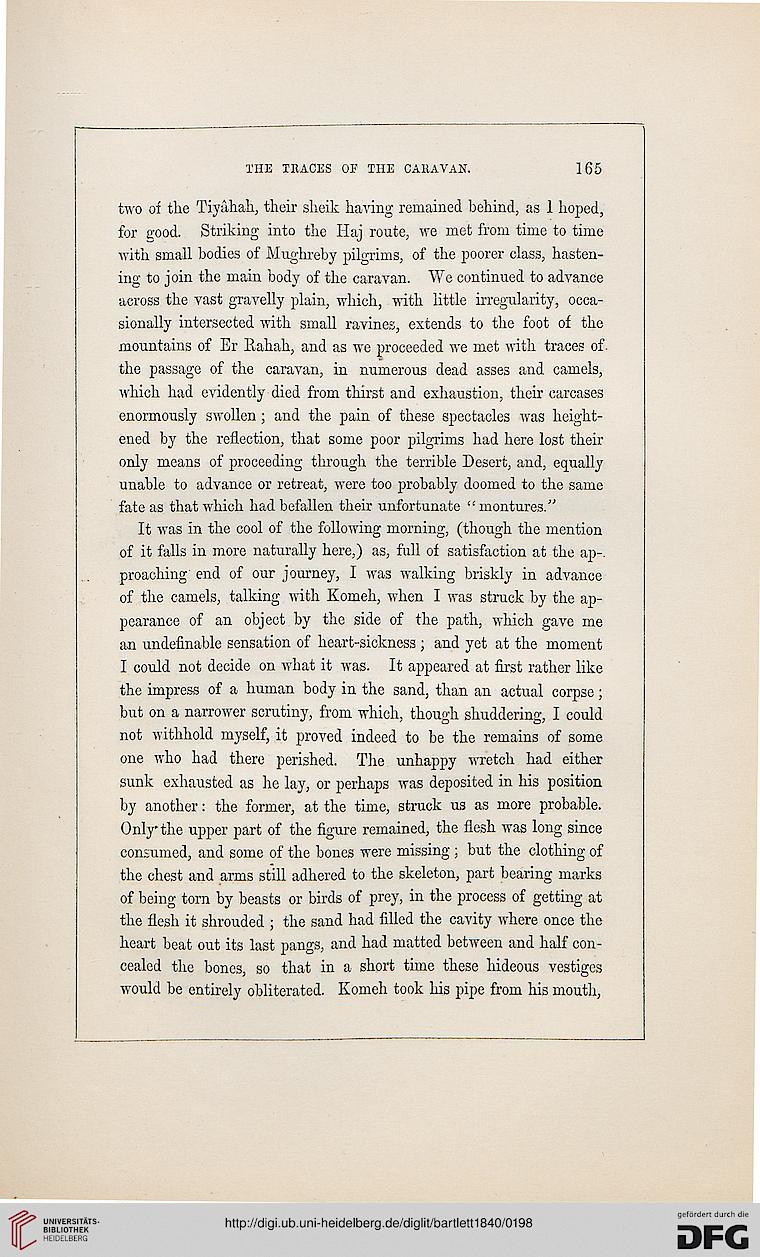 Information about OCR text
THE TRACKS OF THE CAKAVAN. 165

two of the Tiyahah, their sheik having remained behind, as 1 hoped,
for good. Striking into the Haj route, we met from time to time
with small bodies of Mugkreby pilgrims, of the poorer class, hasten-
ing to join the main body of the caravan. We continued to advance
across the vast gravelly plain, which, with little irregularity, occa-
sionally intersected with small ravines, extends to the foot of the
mountains of Er Eahah, and as we proceeded we met with traces of.
the passage of the caravan, in numerous dead asses and camels,
which had evidently died from thirst and exhaustion, their carcases
enormously swollen ; and the pain of these spectacles was height-
ened by the reflection, that some poor pilgrims had here lost their
only means of proceeding through the terrible Desert, and, equally
unable to advance or retreat, were too probably doomed to the same
fate as that which had befallen their unfortunate "montures."

It was in the cool of the following morning, (though the mention
of it falls in more naturally here,) as, full of satisfaction at the ap-.
proaching end of our journey, I was walking briskly in advance
of the camels, talking with Komeh, when I was struck by the ap-
pearance of an object by the side of the path, which gave me
an undefmable sensation of heart-sickness ; and yet at the moment
I could not decide on what it was. It appeared at first rather like
the impress of a human body in the sand, than an actual corpse;
but on a narrower scrutiny, from which, though shuddering, I could
not withhold myself, it proved indeed to be the remains of some
one who had there perished. The unhappy wretch had either
sunk exhausted as he lay, or perhaps was deposited in his position
by another: the former, at the time, struck us as more probable.
Only* the upper part of the figure remained, the flesh was long since
consumed, and some of the bones were missing ; but the clothing of
the chest and arms still adhered to the skeleton, part bearing marks
of being torn by beasts or birds of prey, in the process of getting at
the flesh it shrouded ; the sand had filled the cavity where once the
heart beat out its last pangs, and had matted between and half con-
cealed the bones, so that in a short time these hideous vestiges
would be entirely obliterated. Komeh took his pipe from his mouth,