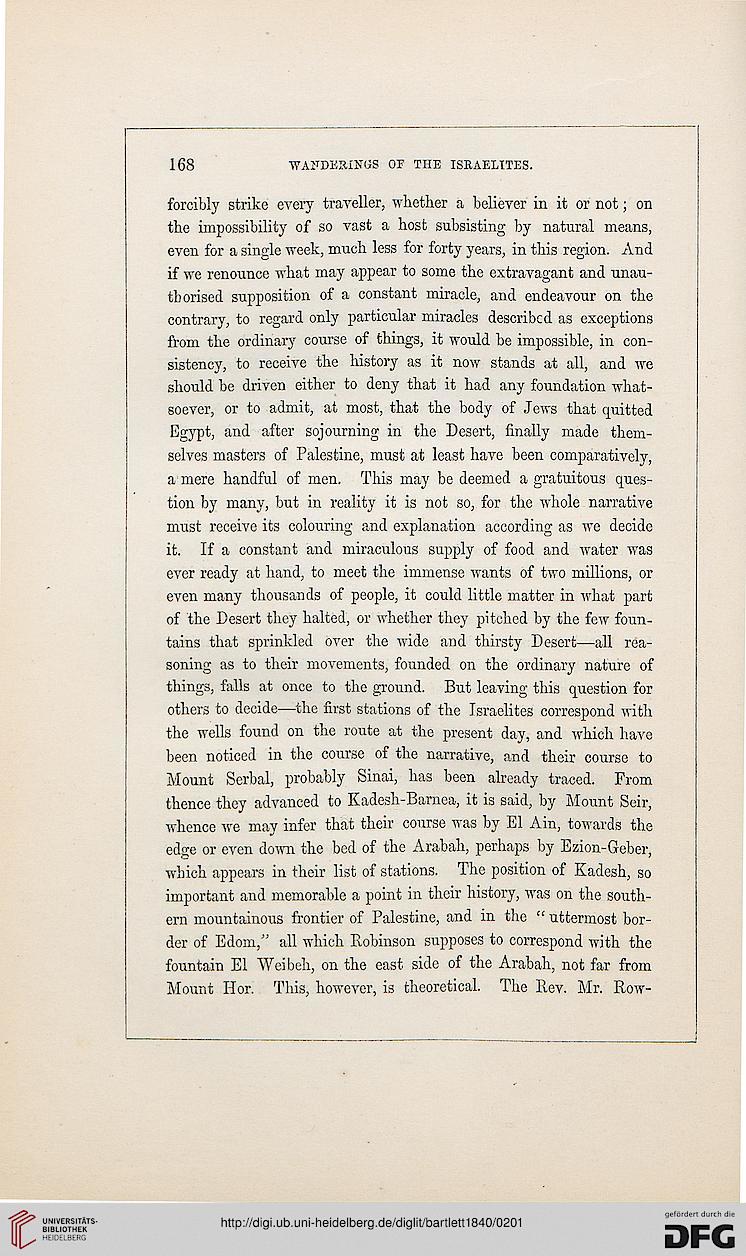 Information about OCR text
168 WAFDEHINGS OF THE ISRAELITES.

forcibly strike every traveller, whether a believer in it or not; on
the impossibility of so vast a host subsisting by natural means,
even for a single week, much less for forty years, in this region. And
if we renounce what may appear to some the extravagant and unau-
thorised supposition of a constant miracle, and endeavour on the
contrary, to regard only particular miracles described as exceptions
from the ordinary course of things, it would be impossible, in con-
sistency, to receive the history as it now stands at all, and we
should be driven either to deny that it had any foundation what-
soever, or to admit, at most, that the body of Jews that quitted
Egypt, and after sojourning in the Desert, finally made them-
selves masters of Palestine, must at least have been comparatively,
a mere handful of men. This may be deemed a gratuitous ques-
tion by many, but in reality it is not so, for the whole narrative
must receive its colouring and explanation according as we decide
it. If a constant and miraculous supply of food and water was
ever ready at hand, to meet the immense wants of two millions, or
even many thousands of people, it could little matter in what part
of the Desert they halted, or whether they pitched by the few foun-
tains that sprinkled over the wide and thirsty Desert—all rea-
soning as to their movements, founded on the ordinary nature of
things, falls at once to the ground. But leaving this question for
others to decide—the first stations of the Israelites correspond with
the wells found on the route at the present day, and which have
been noticed in the course of the narrative, and their course to
Mount Serbal, probably Sinai, has been already traced. From
thence they advanced to Kadesh-Bamea, it is said, by Mount Seir,
whence we may infer that their course was by El Ain, towards the
edge or even down the bed of the Arabah, perhaps by Ezion-Geber,
which appears in their list of stations. The position of Kadesh, so
important and memorable a point in their history, was on the south-
ern mountainous frontier of Palestine, and in the " uttermost bor-
der of Edom," all which Robinson supposes to correspond with the
fountain El Weibeh, on the east side of the Arabah, not far from
Mount Hor. This, however, is theoretical. The Rev. Mr. Row-