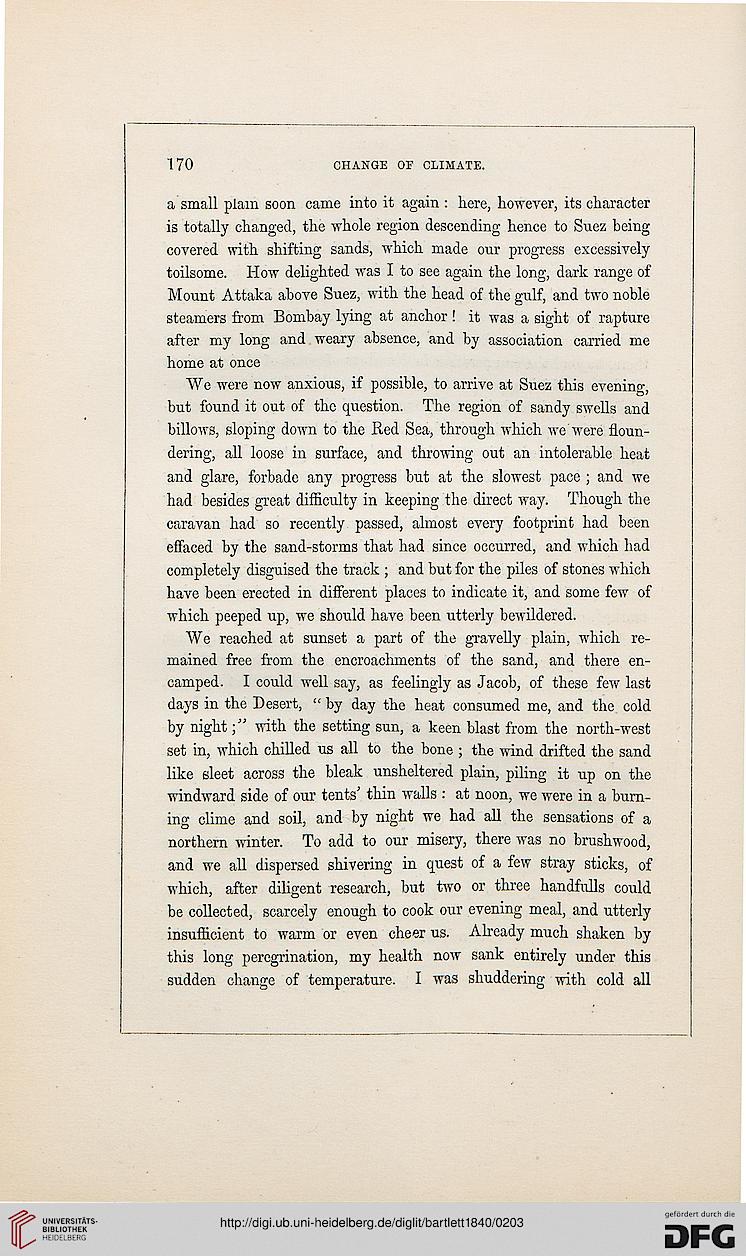 a small plain soon came into it again : here, however, its character
is totally changed, the whole region descending hence to Suez being
covered with shifting sands, which made our progress excessively
toilsome. How delighted was I to see again the long, dark range of
Mount Attaka above Suez, with the head of the gulf, and two noble
steamers from Bombay lying at anchor ! it was a sight of rapture
after my long and weary absence, and by association carried me
home at once

We were now anxious, if possible, to arrive at Suez this evening,
but found it out of the question. The region of sandy swells and
billows, sloping down to the Red Sea, through which we were floun-
dering, all loose in surface, and throwing out an intolerable heat
and glare, forbade any progress but at the slowest pace ; and we
had besides great difficulty in keeping the direct way. Though the
caravan had so recently passed, almost every footprint had been
effaced by the sand-storms that had since occurred, and which had
completely disguised the track ; and but for the piles of stones which
have been erected in different places to indicate it, and some few of
which peeped up, we should have been utterly bewildered.

We reached at sunset a part of the gravelly plain, which re-
mained free from the encroachments of the sand, and there en-
camped. I could well say, as feelingly as Jacob, of these few last
days in the Desert, " by day the heat consumed me, and the cold
by night;" with the setting sun, a keen blast from the north-west
set in, which chilled us all to the bone ; the wind drifted the sand
like sleet across the bleak unsheltered plain, piling it up on the
windward side of our tents' thin walls : at noon, we were in a burn-
ing clime and soil, and by night we had all the sensations of a
northern winter. To add to our misery, there was no brushwood,
and we all dispersed shivering in quest of a few stray sticks, of
which, after diligent research, but two or three handrails could
be collected, scarcely enough to cook our evening meal, and utterly
insufficient to warm or even cheer us. Already much shaken by
this long peregrination, my health now sank entirely under this
sudden change of temperature. I was shuddering with cold all