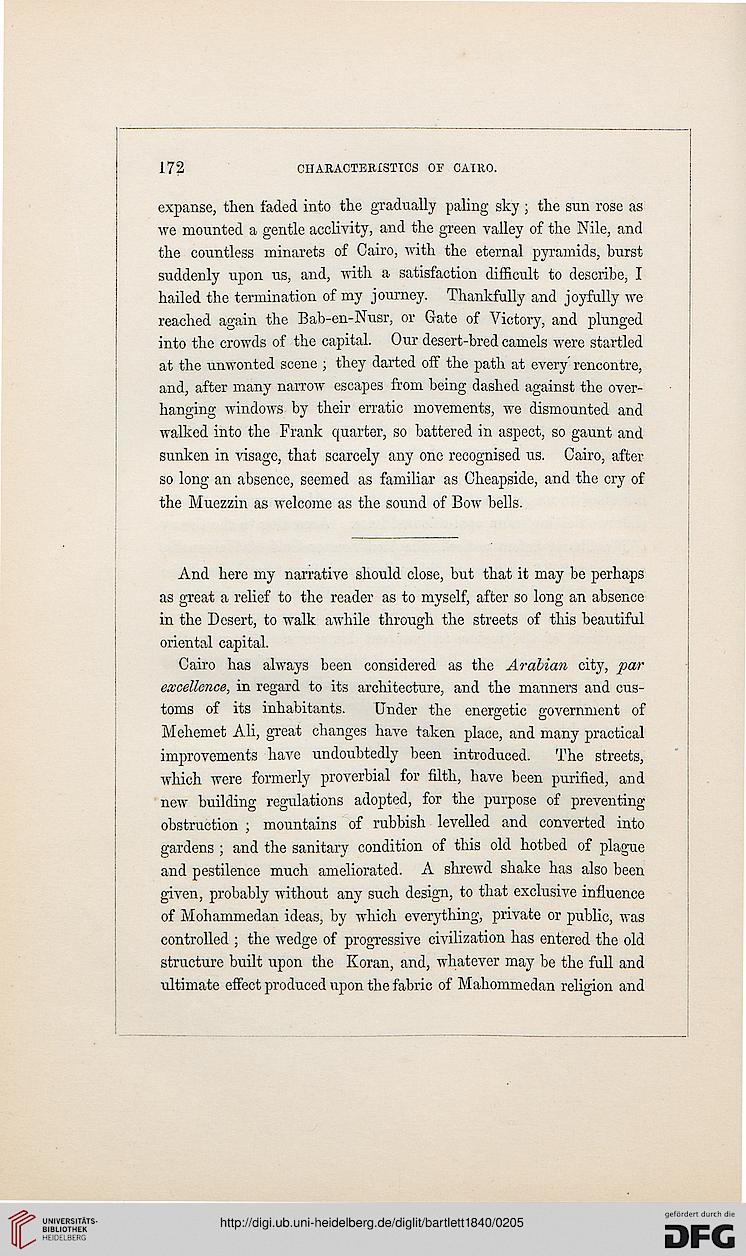 expanse, then faded into the gradually paling sky ; the sun rose as
we mounted a gentle acclivity, and the green valley of the Nile, and
the countless minarets of Cairo, with the eternal pyramids, burst
suddenly upon us, and, with a satisfaction difficult to describe, I
hailed the termination of my journey. Thankfully and joyfully we
reached a"-ain the Bab-en-Nusr, or Gate of Victory, and plunged
into the crowds of the capital. Our desert-bred camels were startled
at the unwonted scene ; they darted off the path at every' rencontre,
and, after many narrow escapes from being dashed against the over-
hanging windows by their erratic movements, we dismounted and
walked into the Frank quarter, so battered in aspect, so gaunt and
sunken in visage, that scarcely any one recognised us. Cairo, after
so long an absence, seemed as familiar as Cheapside, and the cry of
the Muezzin as welcome as the sound of Bow bells.

And here my narrative should close, but that it may be perhaps
as great a relief to the reader as to myself, after so long an absence
in the Desert, to walk awhile through the streets of this beautiful
oriental capital.

Cairo has always been considered as the Arabian city, par
excellence, in regard to its architecture, and the manners and cus-
toms of its inhabitants. Under the energetic government of
Mehemet Ali, great changes have taken place, and many practical
improvements have undoubtedly been introduced. The streets,
which were formerly proverbial for filth, have been purified, and
new building regulations adopted, for the purpose of preventing
obstruction ; mountains of rubbish levelled and converted into
gardens ; and the sanitary condition of this old hotbed of plague
and pestilence much ameliorated. A shrewd shake has also been
given, probably without any such design, to that exclusive influence
of Mohammedan ideas, by which everything, private or public, was
controlled ; the wedge of progressive civilization has entered the old
structure built upon the Koran, and, whatever may be the full and
ultimate effect produced upon the fabric of Mahommedan religion and