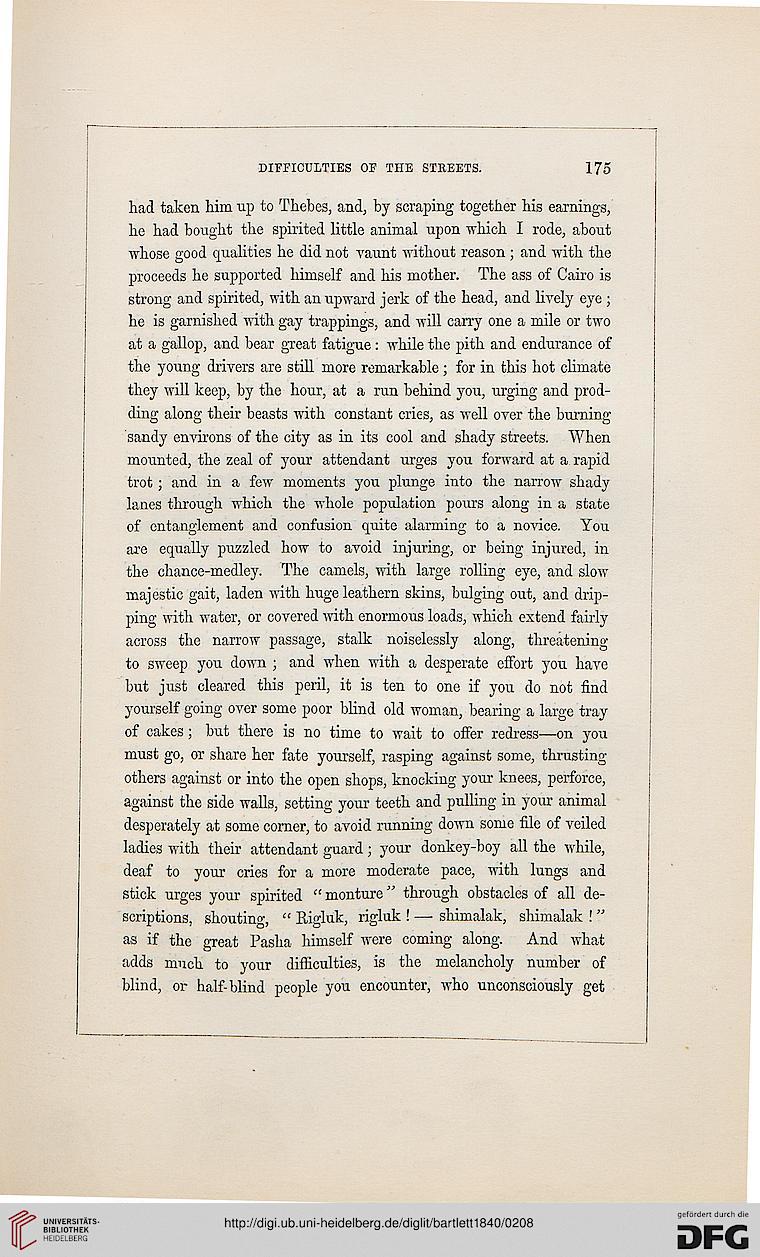 Information about OCR text
DIFFICULTIES OF THE STREETS. 175

had taken him up to Thebes, and, by scraping together his earnings,
he had bought the spirited little animal upon which I rode, about
whose good qualities he did not vaunt without reason ; and with the
proceeds he supported himself and his mother. The ass of Cairo is
strong and spirited, with an upward jerk of the head, and lively eye ;
he is garnished with gay trappings, and will carry one a mile or two
at a gallop, and bear great fatigue: while the pith and endurance of
the young drivers are still more remarkable; for in this hot climate
they will keep, by the hour, at a run behind you, urging and prod-
ding along their beasts with constant cries, as well over the burning
sandy environs of the city as in its cool and shady streets. When
mounted, the zeal of your attendant urges you forward at a rapid
trot ; and in a few moments you plunge into the narrow shady
lanes through which the whole population pours along in a state
of entanglement and confusion quite alarming to a novice. You
are equally puzzled how to avoid injuring, or being injured, in
the chance-medley. The camels, with large rolling eye, and slow
majestic gait, laden with huge leathern skins, bulging out, and drip-
ping with water, or covered with enormous loads, which extend fairly
across the narrow passage, stalk noiselessly along, threatening
to sweep you down ; and when with a desperate effort you have
but just cleared this peril, it is ten to one if you do not find
yourself going over some poor blind old woman, bearing a large tray
of cakes; but there is no time to wait to offer redress—on you
must go, or share her fate yourself, rasping against some, thrusting
others against or into the open shops, knocking your knees, perforce,
against the side walls, setting your teeth and pulling in your animal
desperately at some corner, to avoid running down some file of veiled
ladies with their attendant guard; your donkey-boy all the while,
deaf to your cries for a more moderate pace, with lungs and
stick urges your spirited " monture" through obstacles of all de-
scriptions, shouting, " Kigluk, rigluk ! —• shimalak, shimalak ! "
as if the great Pasha himself were coming along. And what
adds much to your difficulties, is the melancholy number of
blind, or half-blind people you encounter, who unconsciously get