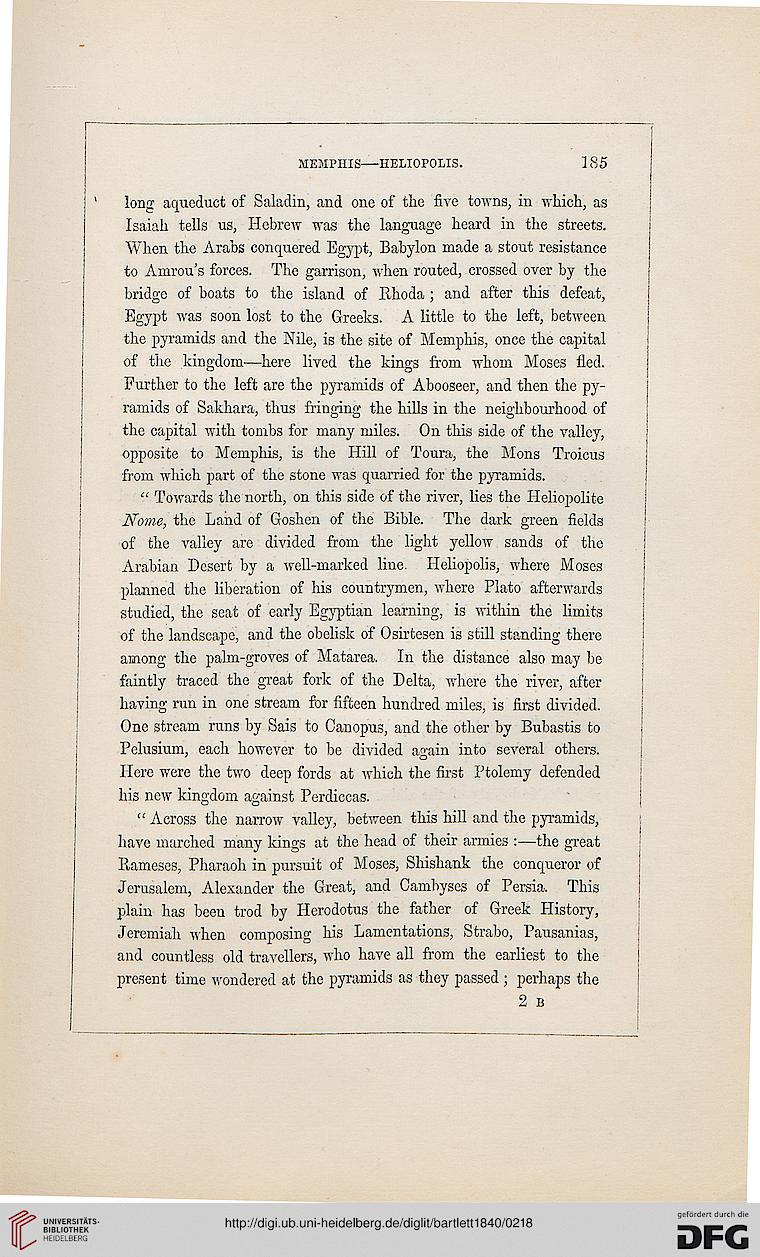 long aqueduct of Saladin, and one of the five towns, in which, as
Isaiah tells us, Hebrew was the language heard in the streets.
When the Arabs conquered Egypt, Babylon made a stout resistance
to Amrou's forces. The garrison, when routed, crossed over by the
bridge of boats to the island of Rhoda ; and after this defeat,
Egypt was soon lost to the Greeks. A little to the left, between
the pyramids and the Nile, is the site of Memphis, once the capital
of the kingdom—here lived the kings from whom Moses fled.
Further to the left are the pyramids of Abooseer, and then the py-
ramids of Sakhara, thus fringing the hills in the neighbourhood of
the capital with tombs for many miles. On this side of the valley,
opposite to Memphis, is the Hill of Toura, the Lions Troicus
from which part of the stone was quarried for the pyramids.

" Towards the north, on this side of the river, lies the Heliopolite
Nome, the Land of Goshen of the Bible. The dark green fields
of the valley are divided from the light yellow sands of the
Arabian Desert by a well-marked line. Heliopolis, where Moses
planned the liberation of his countrymen, where Plato afterwards
studied, the seat of early Egyptian learning, is within the limits
of the landscape, and the obelisk of Osirtesen is still standing there
among the palm-groves of Matarea. In the distance also may be
faintly traced the great fork of the Delta, where the river, after
having run in one stream for fifteen hundred miles, is first divided.
One stream runs by Sais to Canopus, and the other by Bubastis to
Pelusium, each however to be divided again into several others.
Here were the two deep fords at which the first Ptolemy defended
his new kingdom against Perdiccas.

" Across the narrow valley, between this hill and the pyramids,
have marched many kings at the head of their armies :—the great
Rameses, Pharaoh in pursuit of Moses, Shishank the conqueror of
Jerusalem, Alexander the Great, and Camhyses of Persia. This
plain has been trod by Herodotus the father of Greek History,
Jeremiah when composing his Lamentations, Strabo, Pausanias,
and countless old travellers, who have all from the earliest to the
present time wondered at the pyramids as they passed ; perhaps the