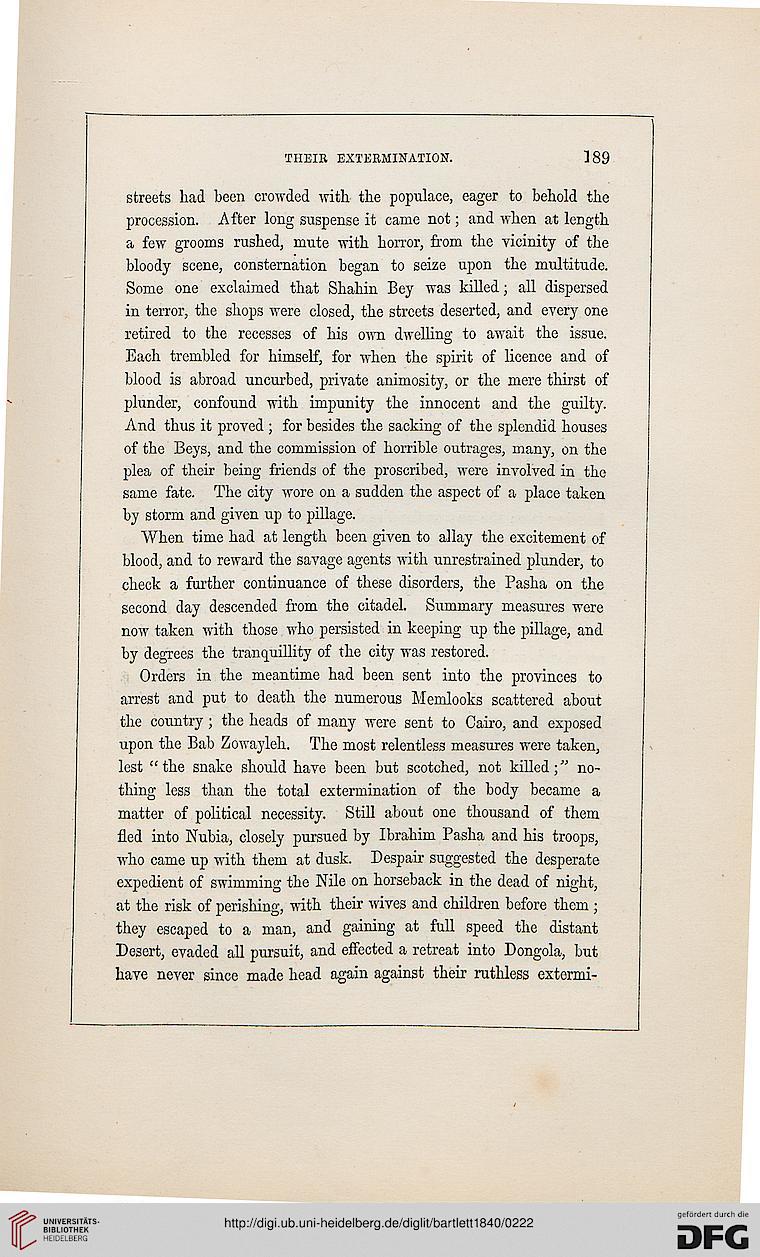 Information about OCR text
THEIR EXTERMINATION.

streets bad been crowded with the populace, eager to behold the
procession. After long suspense it came not; and when at length
a few grooms rushed, mute with horror, from the vicinity of the
bloody scene, consternation began to seize upon the multitude.
Some one exclaimed that Shahin Bey was killed; all dispersed
in terror, the shops were closed, the streets deserted, and every one
retired to the recesses of his own dwelling to await the issue.
Each trembled for himself, for when the spirit of licence and of
blood is abroad uncurbed, private animosity, or the mere thirst of
plunder, confound with impunity the innocent and the guilty.
And thus it proved ; for besides the sacking of the splendid houses
of the Beys, and the commission of horrible outrages, many, on the
plea of their being friends of the proscribed, were imrolved in the
same fate. The city wore on a sudden the aspect of a place taken
by storm and given up to pillage.

When time had at length been given to allay the excitement of
blood, and to reward the savage agents with unrestrained plunder, to
check a further continuance of these disorders, the Pasha on the
second day descended from the citadel. Summary measures were
now taken with those who persisted in keeping up the pillage, and
by degrees the tranquillity of the city was restored.

Orders in the meantime had been sent into the provinces to
arrest and put to death the numerous Memlooks scattered about
the country ; the heads of many were sent to Cairo, and exposed
upon the Bab Zowayleh. The most relentless measures were taken,
lest " the snake should have been but scotched, not killed;" no-
thing less than the total extermination of the body became a
matter of political necessity. Still about one thousand of them
fled into Nubia, closely pursued by Ibrahim Pasha and his troops,
who came up with them at dusk. Despair suggested the desperate
expedient of swimming the Nile on horseback in the dead of night,
at the risk of perishing, with their wives and children before them;
they escaped to a man, and gaining at full speed the distant
Desert, evaded all pursuit, and effected a retreat into Dongola, but
have never since made head again against their ruthless extormi-