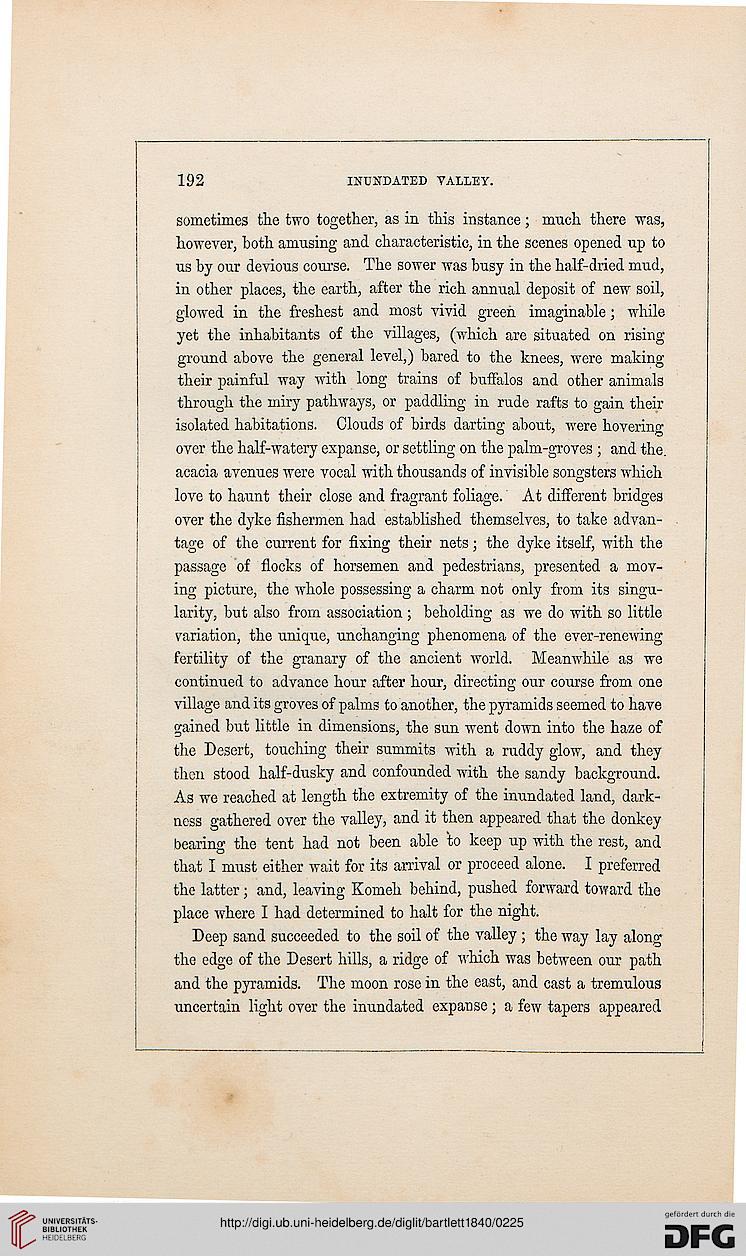 sometimes the two together, as in this instance; much there was,
however, both amusing and characteristic, in the scenes opened up to
us by our devious course. The sower was busy in the half-dried mud,
in other places, the earth, after the rich annual deposit of new soil,
glowed in the freshest and most vivid green imaginable; while
yet the inhabitants of the villages, (which are situated on rising
ground above the general level,) bared to the knees, were making
their painful way with long trains of bixffalos and other animals
through the miry pathways, or paddling in rude rafts to gain their
isolated habitations. Clouds of birds darting about, were hovering
over the half-watery expanse, or settling on the palm-groves ; and the.
acacia avenues were vocal with thousands of invisible songsters which
love to haunt their close and fragrant foliage. At different bridges
over the dyke fishermen had established themselves, to take advan-
tage of the current for fixing their nets; the dyke itself, with the
passage of flocks of horsemen and pedestrians, presented a mov-
ing picture, the whole possessing a charm not only from its singu-
larity, but also from association ; beholding as we do with so little
variation, the unique, unchanging phenomena of the ever-renewing
fertility of the granary of the ancient world. Meanwhile as we
continued to advance hour after hour, directing our course from one
village and its groves of palms to another, the pyramids seemed to have
gained but little in dimensions, the sun went down into the haze of
the Desert, touching their summits with a ruddy glow, and they
then stood half-dusky and confounded with the sandy background.
As we reached at length the extremity of the inundated land, dark-
ness gathered over the valley, and it then appeared that the donkey
bearing the tent had not been able 'to keep up with the rest, and
that I must either wait for its arrival or proceed alone. I preferred
the latter; and, leaving Komeh behind, pushed forward toward the
place where I had determined to halt for the night.

Deep sand succeeded to the soil of the valley ; the way lay along
the edge of the Desert hills, a ridge of which was between our path
and the pyramids. The moon rose in the east, and cast a tremulous
uncertain light over the inundated expanse ; a few tapers appeared