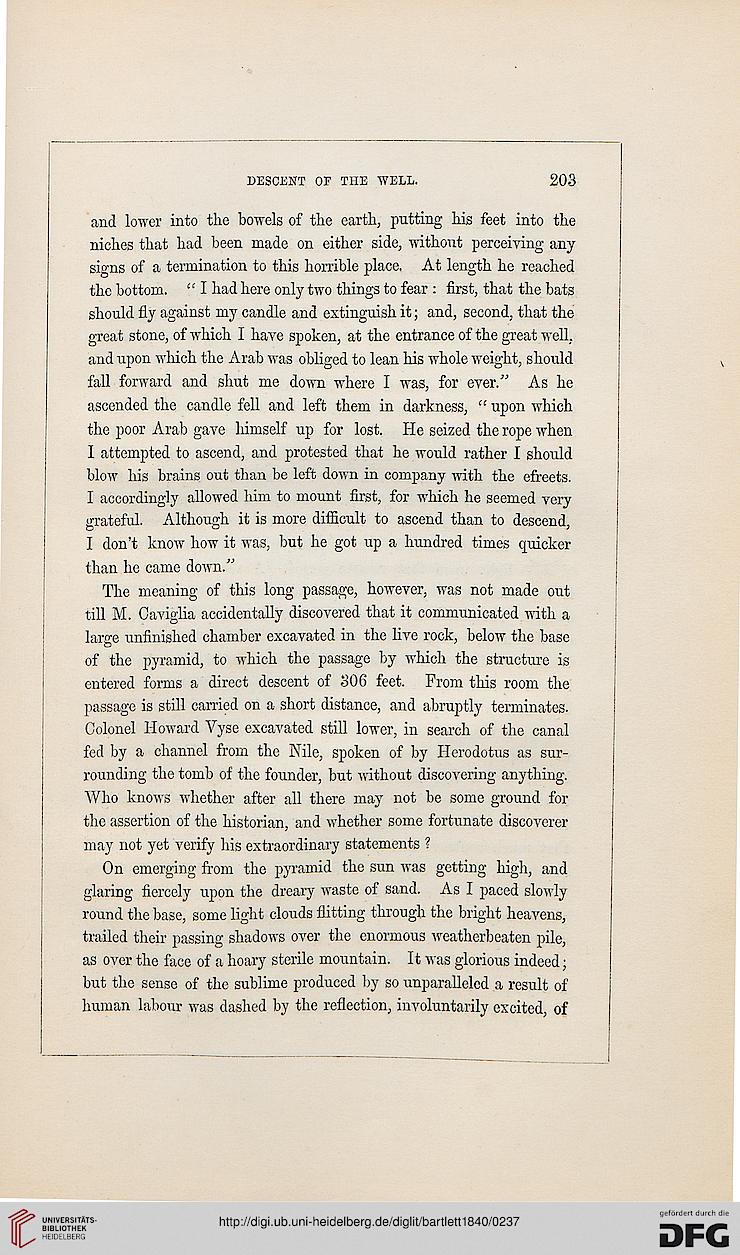 Information about OCR text
DESCENT OF THE WELL.

and lower into the bowels of the earth, putting his feet into the
niches that had been made on either side, without perceiving any
si«-ns of a termination to this horrible place. At length he reached
the bottom. " I had here only two things to fear : first, that the bats
should fly against my candle and extinguish it; and, second, that the
great stone, of which I have spoken, at the entrance of the great well,
and upon which the Arab was obliged to lean his whole weight, should
fall forward and shut me down where I was, for ever." As he
ascended the candle fell and left them in darkness, " upon which
the poor Arab gave himself up for lost. He seized the rope when
I attempted to ascend, and protested that he would rather I should
blow his brains out than be left down in company with the efreets.
I accordingly allowed him to mount first, for which he seemed very
grateful. Although it is more difficult to ascend than to descend,
I don't know how it was, but he got up a hundred times quicker
than he came down."

The meaning of this long passage, however, was not made out
till M. Caviglia accidentally discovered that it communicated with a
large unfinished chamber excavated in the live rock, below the base
of the pyramid, to which the passage by which the structure is
entered forms a direct descent of 306 feet. From this room the
passage is still earned on a short distance, and abruptly terminates.
Colonel Howard Vyse excavated still lower, in search of the canal
fed by a channel from the Nile, spoken of by Herodotus as sur-
rounding the tomb of the founder, but without discovering anything.
Who knows whether after all there may not be some ground for
the assertion of the historian, and whether some fortunate discoverer
may not yet verify his extraordinary statements ?

On emerging from the pyramid the sun was getting high, and
glaring fiercely upon the dreary waste of sand. As I paced slowly
round the base, some light clouds flitting through the bright heavens,
trailed their passing shadows over the enormous weatherbeaten pile,
as over the face of a hoary sterile mountain. It was glorious indeed;
but the sense of the sublime produced by so unparalleled a result of
human labour was dashed by the reflection, involuntarily excited, of