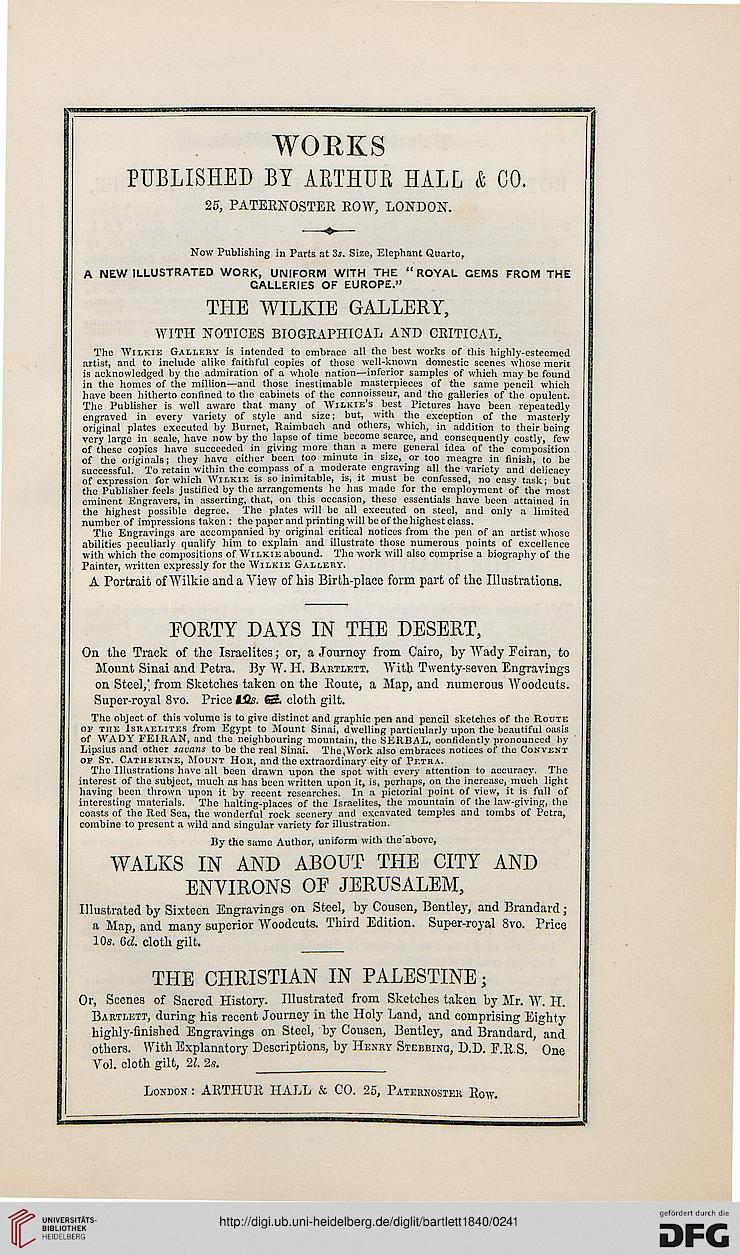 A NEW ILLUSTRATED WORK, UNIFORM WITH THE "ROYAL OEMS FROM THE
GALLERIES OF EUROPE."

WITH NOTICES BIOGRAPHICAL AND CRITICAL,

The Wilkie Gallery is intended to embrace all the best works of this highly-esteemed
artist, and to include alike faithful copies of those well-known domestic scenes whose merit
is acknowledged by the admiration of a whole nation—inferior samples of which may be found
in the homes of the million—and those inestimable masterpieces of the same pencil which
have been hitherto confined to the cabinets of the connoisseur, and the galleries of the opulent.
The Publisher is well aware that many of Wilkie's best Pictures have been repeatedly
engraved in every variety of style and size; but, with the exception of the masterly
original plates executed by Burnet, Raimbach and others, which, in addition to their being
very large in scale, have now by the lapse of time become scarce, and consequently costly, few
of these copies have succeeded in giving more than a mere general idea of the composition
of the originals; they have either been too minute in size, or too meagre in finish, to be
successful. To retain within the compass of a moderate engraving all the variety and delicacy
of expression for which Wilkie is so inimitable, is, it must be confessed, no easy task; but
the Publisher feels justified by the arrangements he has made for the employment of the most
eminent Engravers, in asserting, that, on this occasion, these essentials have been attained in
the highest possible degree. The plates will be all executed on steel, and only a limited
number of impressions taken : the paper and printing will be of the highest class.

The Engravings are accompanied by original critical notices from the pen of an artist whose
abilities peculiarly qualify him to explain and illustrate those numerous points of excellence
with which the compositions of Wilkie abound. The work will also comprise a biography of the
Painter, written expressly for the Wilkie Gallery.

A Portrait of Wilkie and a View of his Birth-place form part of the Illustrations.

FORTY DAYS IN THE DESERT,

On the Track of the Israelites; or, a Journey from Cairo, by AVady Feiran, to
Mount Sinai and Petra. By W. H. Bartlett. With Twenty-seven Engravings
on Steel," from Sketches taken on the Route, a Map, and numerous Woodcuts.
Super-royal 8vo. Price Ills. 63. cloth gilt.

The object of this volume is to give distinct and graphic pen and pencil sketches of the Route
or the Israelites from Egypt to Mount Sinai, dwelling particularly upon the beautiful oasis
of WADY FEIRAN, and the neighbouring mountain, the SERBAL, confidently pronounced hy
Lipsius and other sai-ans to be the real Sinai. ThcWork also embraces notices of the Convent
op St. Catherine, Mount Hor, and the extraordinary city of Petra.

The Illustrations have all been drawn upon the spot with every attention to accuracy. The
interest of the subject, much as has been written upon it, is, perhaps, on the increase, much light
having been thrown upon it by recent researches. In a pictorial point of view, it is full of
interesting materials. The halting-places of the Israelites, the mountain of the law-giving, the
coasts of the Red Sea, the wonderful rock scenery and excavated temples and tombs of Petra,
combine to present a wild and singular variety for illustration.

By the same Author, uniform with the'above,

WALKS IN AND ABOUT THE CITY AND
ENVIRONS OF JERUSALEM,

THE CHRISTIAN IN PALESTINE;

Or, Scenes of Sacred History. Illustrated from Sketches taken by Mr. W. IT.
Bartlett, during his recent Journey in the Holy Land, and comprising Eighty
highly-finished Engravings on Steel, by Cousen, Bentley, and Brandard, and
others. With Explanatory Descriptions, by Henry Stcbbing, D.D. E.R.S. One
Vol. cloth gilt, 21. 2s.___________________