Beaufort, Emily Anne
Egyptian sepulchres and Syrian shrines: including some stay in the Lebanon, at Palmyra and in Western Turkey ; in 2 vol. (Band 1) — London, 1862 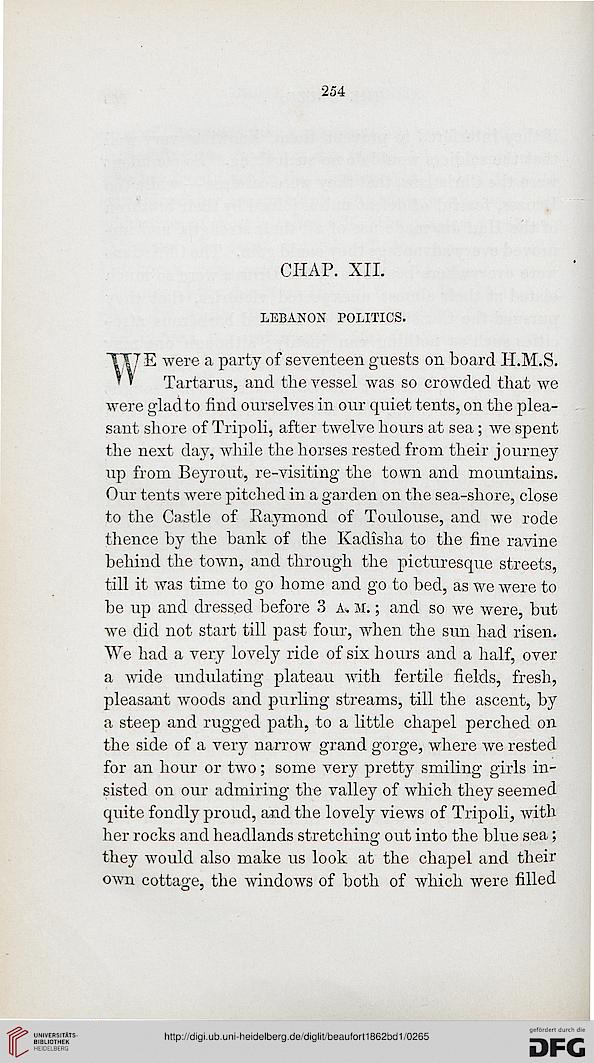 E were a party of seventeen guests on board Ii.M.S.

' ' Tartarus, and the vessel was so crowded that we
were glad to find ourselves in our quiet tents, on the plea-
sant shore of Tripoli, after twelve hours at sea; we spent
the next day, while the horses rested from their journey
up from Beyrout, re-visiting the town and mountains.
Our tents were pitched in a garden on the sea-shore, close
to the Castle of Raymond of Toulouse, and we rode
thence by the bank of the Kadisha to the fine ravine
behind the town, and through the picturesque streets,
till it was time to go home and go to bed, as we were to
be up and dressed before 3 a» m. ; and so we were, but
we did not start till past four, when the sun had risen.
We had a very lovely ride of six hours and a half, over
a wide undulating plateau with fertile fields, fresh,
pleasant woods and purling streams, till the ascent, by
a steep and rugged path, to a little chapel perched on
the side of a very narrow grand gorge, where we rested
for an hour or two; some very pretty smiling girls in-
sisted on our admiring the valley of which they seemed
quite fondly proud, and the lovely views of Tripoli, with
her rocks and headlands stretching out into the blue sea;
they would also make us look at the chapel and their
own cottage, the windows of both of which were filled