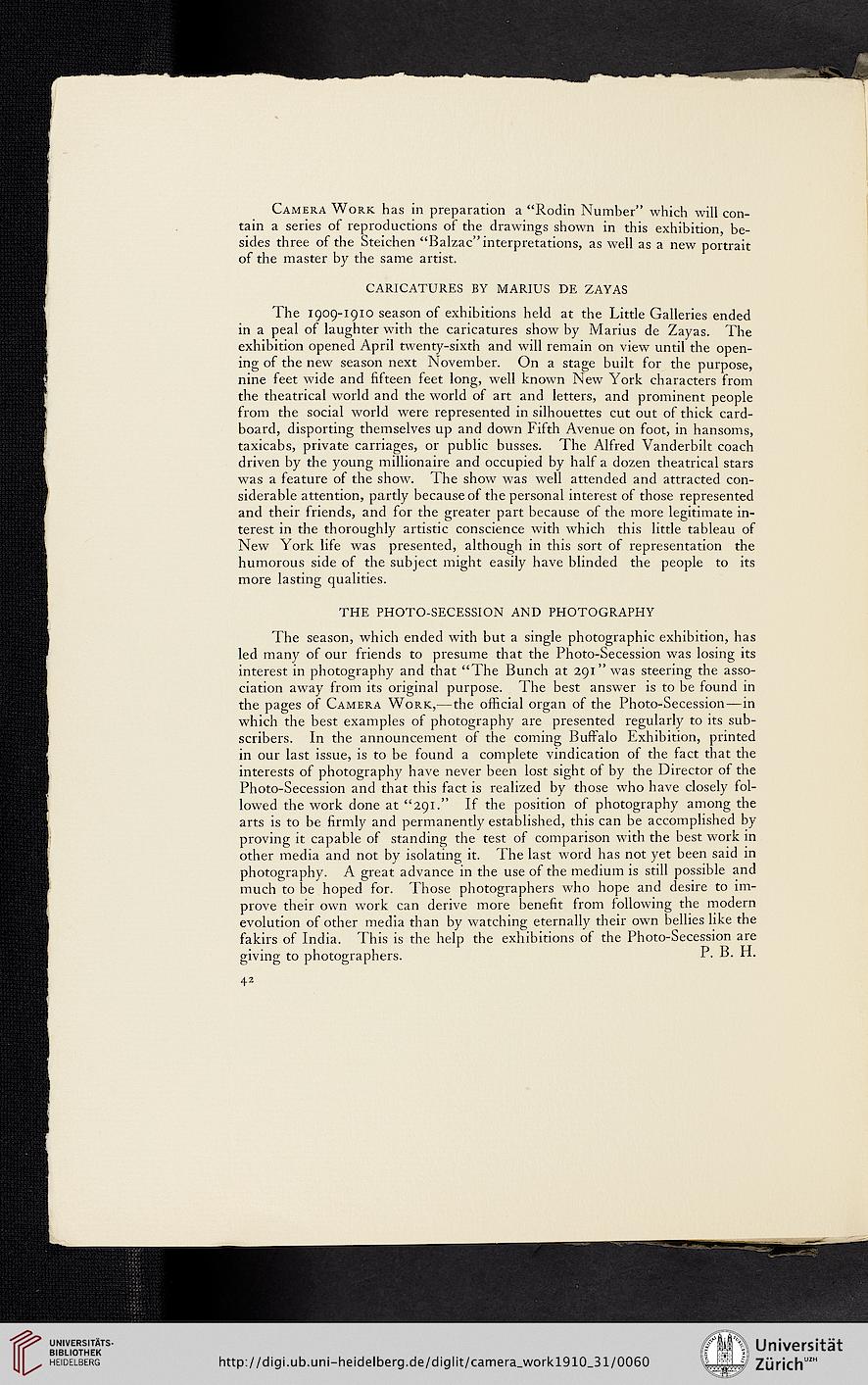 Information about OCR text
Camera Work has in preparation a “Rodin Number” which will con-
tain a series of reproductions of the drawings shown in this exhibition, be-
sides three of the Steichen “Balzac”interpretations, as well as a new portrait
of the master by the same artist.
CARICATURES BY MARIUS DE ZAYAS
The 1909-1910 season of exhibitions held at the Little Galleries ended
in a peal of laughter with the caricatures show by Marius de Zayas. The
exhibition opened April twenty-sixth and will remain on view until the open-
ing of the new season next November. On a stage built for the purpose,
nine feet wide and fifteen feet long, well known New York characters from
the theatrical world and the world of art and letters, and prominent people
from the social world were represented in silhouettes cut out of thick card-
board, disporting themselves up and down Fifth Avenue on foot, in hansoms,
taxicabs, private carriages, or public busses. The Alfred Vanderbilt coach
driven by the young millionaire and occupied by half a dozen theatrical stars
was a feature of the show. The show was well attended and attracted con-
siderable attention, partly because of the personal interest of those represented
and their friends, and for the greater part because of the more legitimate in-
terest in the thoroughly artistic conscience with which this little tableau of
New York life was presented, although in this sort of representation the
humorous side of the subject might easily have blinded the people to its
more lasting qualities.
THE PHOTO-SECESSION AND PHOTOGRAPHY
The season, which ended with but a single photographic exhibition, has
led many of our friends to presume that the Photo-Secession was losing its
interest in photography and that “The Bunch at 291” was steering the asso-
ciation away from its original purpose. The best answer is to be found in
the pages of Camera Work,—the official organ of the Photo-Secession—in
which the best examples of photography are presented regularly to its sub-
scribers. In the announcement of the coming Buffalo Exhibition, printed
in our last issue, is to be found a complete vindication of the fact that the
interests of photography have never been lost sight of by the Director of the
Photo-Secession and that this fact is realized by those who have closely fol-
lowed the work done at “291.” If the position of photography among the
arts is to be firmly and permanently established, this can be accomplished by
proving it capable of standing the test of comparison with the best work in
other media and not by isolating it. The last word has not yet been said in
photography. A great advance in the use of the medium is still possible and
much to be hoped for. Those photographers who hope and desire to im-
prove their own work can derive more benefit from following the modern
evolution of other media than by watching eternally their own bellies like the
fakirs of India. This is the help the exhibitions of the Photo-Secession are
giving to photographers. P. B. H.