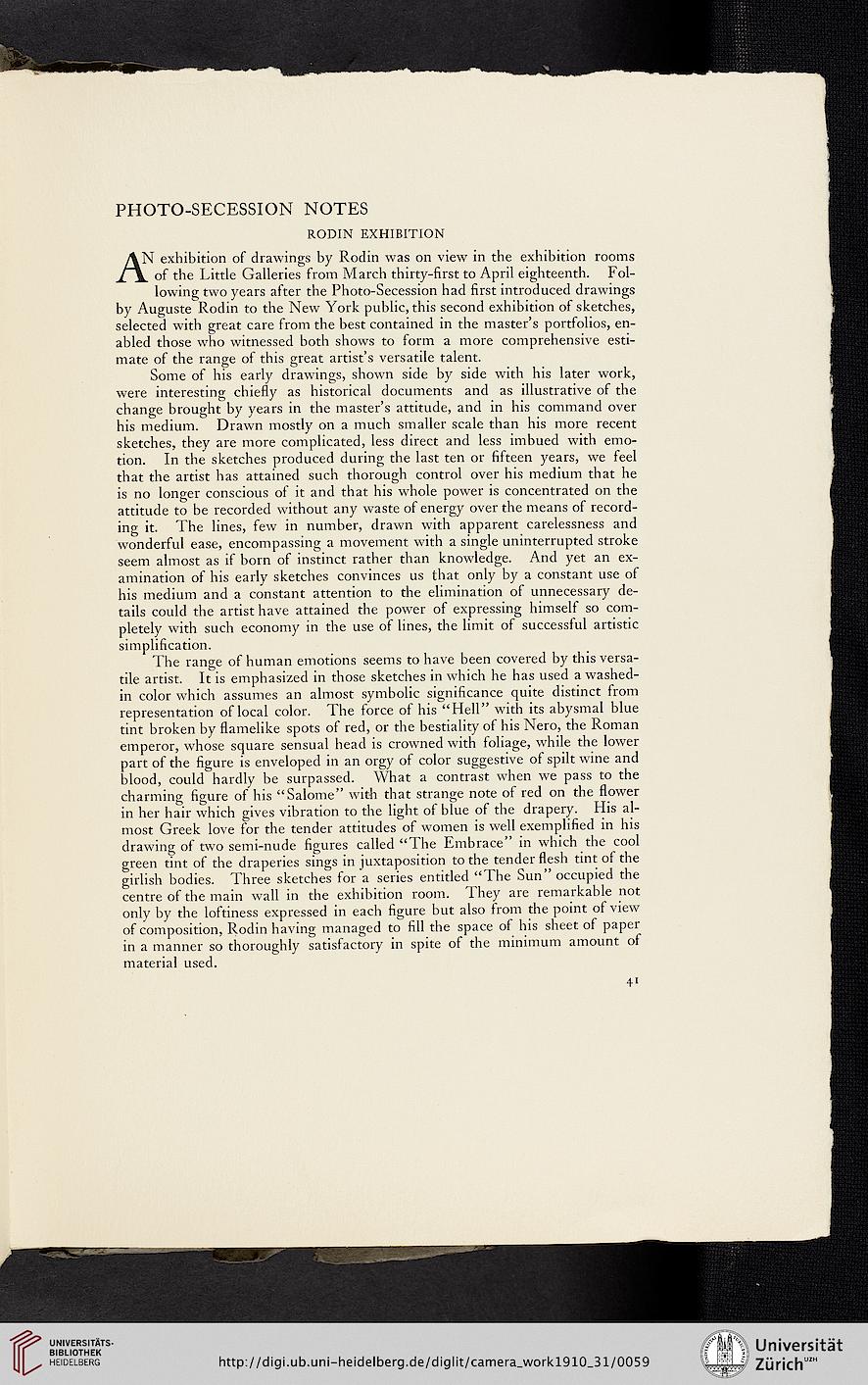 RODIN EXHIBITION
AN exhibition of drawings by Rodin was on view in the exhibition rooms
of the Little Galleries from March thirty-first to April eighteenth. Fol-
lowing two years after the Photo-Secession had first introduced drawings
by Auguste Rodin to the New York public, this second exhibition of sketches,
selected with great care from the best contained in the master’s portfolios, en-
abled those who witnessed both shows to form a more comprehensive esti-
mate of the range of this great artist’s versatile talent.
Some of his early drawings, shown side by side with his later work,
were interesting chiefly as historical documents and as illustrative of the
change brought by years in the master’s attitude, and in his command over
his medium. Drawn mostly on a much smaller scale than his more recent
sketches, they are more complicated, less direct and less imbued with emo-
tion. In the sketches produced during the last ten or fifteen years, we feel
that the artist has attained such thorough control over his medium that he
is no longer conscious of it and that his whole power is concentrated on the
attitude to be recorded without any waste of energy over the means of record-
ing it. The lines, few in number, drawn with apparent carelessness and
wonderful ease, encompassing a movement with a single uninterrupted stroke
seem almost as if born of instinct rather than knowledge. And yet an ex-
amination of his early sketches convinces us that only by a constant use of
his medium and a constant attention to the elimination of unnecessary de-
tails could the artisthave attained the power of expressing himself so com-
pletely with such economy in the use of lines, the limit of successful artistic
simplification.
The range of human emotions seems to have been covered by this versa-
tile artist. It is emphasized in those sketches in which he has used a washed-
in color which assumes an almost symbolic significance quite distinct from
representation of local color. The force of his “Hell” with its abysmal blue
tint broken by flamelike spots of red, or the bestiality of his Nero, the Roman
emperor, whose square sensual head is crowned with foliage, while the lower
part of the figure is enveloped in an orgy of color suggestive of spilt wine and
blood, could hardly be surpassed. What a contrast when we pass to the
charming figure of his “Salome” with that strange note of red on the flower
in her hair which gives vibration to the light of blue of the drapery. His al-
most Greek love for the tender attitudes of women is well exemplified in his
drawing of two semi-nude figures called “The Embrace” in which the cool
green tint of the draperies sings in juxtaposition to the tender flesh tint of the
girlish bodies. Three sketches for a series entitled “The Sun” occupied the
centre of the main wall in the exhibition room. They are remarkable not
only by the loftiness expressed in each figure but also from the point of view
of composition, Rodin having managed to fill the space of his sheet of paper
in a manner so thoroughly satisfactory in spite of the minimum amount of
material used.