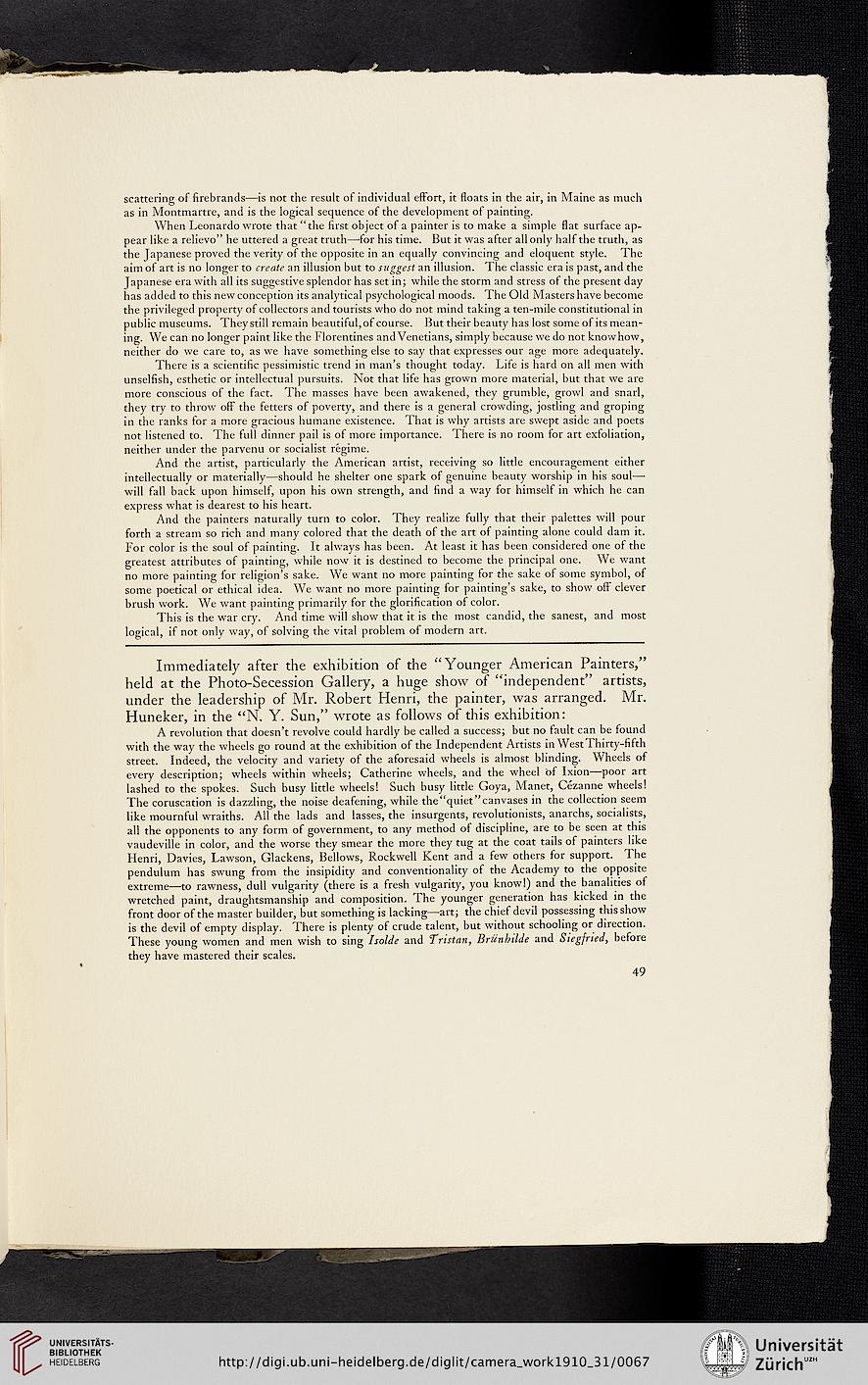 Information about OCR text
scattering of firebrands—is not the result of individual effort, it floats in the air, in Maine as much
as in Montmartre, and is the logical sequence of the development of painting.
When Leonardo wrote that “the first object of a painter is to make a simple flat surface ap-
pear like a relievo” he uttered a great truth—for his time. But it was after all only half the truth, as
the Japanese proved the verity of the opposite in an equally convincing and eloquent style. The
aim of art is no longer to create an illusion but to suggest an illusion. The classic era is past, and the
Japanese era with all its suggestive splendor has set in; while the storm and stress of the present day
has added to this new conception its analytical psychological moods. The Old Masters have become
the privileged property of collectors and tourists who do not mind taking a ten-mile constitutional in
public museums. They still remain beautiful,of course. But their beauty has lost some of its mean-
ing. We can no longer paint like the Florentines and Venetians, simply because we do not knowhow,
neither do we care to, as we have something else to say that expresses our age more adequately.
There is a scientific pessimistic trend in man’s thought today. Life is hard on all men with
unselfish, esthetic or intellectual pursuits. Not that life has grown more material, but that we are
more conscious of the fact. The masses have been awakened, they grumble, growl and snarl,
they try to throw off the fetters of poverty, and there is a general crowding, jostling and groping
in the ranks for a more gracious humane existence. That is why artists are swept aside and poets
not listened to. The full dinner pail is of more importance. There is no room for art exfoliation,
neither under the parvenu or socialist régime.
And the artist, particularly the American artist, receiving so little encouragement either
inellectually or materially—should he shelter one spark of genuine beauty worship in his soul—
will fall back upon himself, upon his own strength, and find a way for himself in which he can
express what is dearest to his heart.
And the painters naturally turn to color. They realize fully that their palettes will pour
forth a stream so rich and many colored that the death of the art of painting alone could dam it.
For color is the soul of painting. It always has been. At least it has been considered one of the
greatest attributes of painting, while now it is destined to become the principal one. We want
no more painting for religion’s sake. We want no more painting for the sake of some symbol, of
some poetical or ethical idea. We want no more painting for painting’s sake, to show off clever
brush work. We want painting primarily for the glorification of color.
This is the war cry. And time will show that it is the most candid, the sanest, and most
logical, if not only way, of solving the vital problem of modern art.

Immediately after the exhibition of the “Younger American Painters,”
held at the Photo-Secession Gallery, a huge show of “independent” artists,
under the leadership of Mr. Robert Henri, the painter, was arranged. Mr.
Huneker, in the “N. Y. Sun,” wrote as follows of this exhibition:
A revolution that doesn’t revolve could hardly be called a success; but no fault can be found
with the way the wheels go round at the exhibition of the Independent Artists in West Thirty-fifth
street. Indeed, the velocity and variety of the aforesaid wheels is almost blinding. Wheels of
every description; wheels within wheels; Catherine wheels, and the wheel of Ixion—poor art
lashed to the spokes. Such busy little wheels! Such busy little Goya, Manet, Cézanne wheels!
The coruscation is dazzling, the noise deafening, while the“quiet”canvases in the collection seem
like mournful wraiths. All the lads and lasses, the insurgents, revolutionists, anarchs, socialists,
all the opponents to any form of government, to any method of discipline, are to be seen at this
vaudeville in color, and the worse they smear the more they tug at the coat tails of painters like
Henri, Davies, Lawson, Glackens, Bellows, Rockwell Kent and a few others for support. The
pendulum has swung from the insipidity and conventionality of the Academy to the opposite
extreme—to rawness, dull vulgarity (there is a fresh vulgarity, you know!) and the banalities of
wretched paint, draughtsmanship and composition. The younger generation has kicked in the
front door of the master builder, but something is lacking—art; the chief devil possessing this show
is the devil of empty display. There is plenty of crude talent, but without schooling or direction.
These young women and men wish to sing Isolde and Tristan , Brünhilde and Siegfried, before
they have mastered their scales.