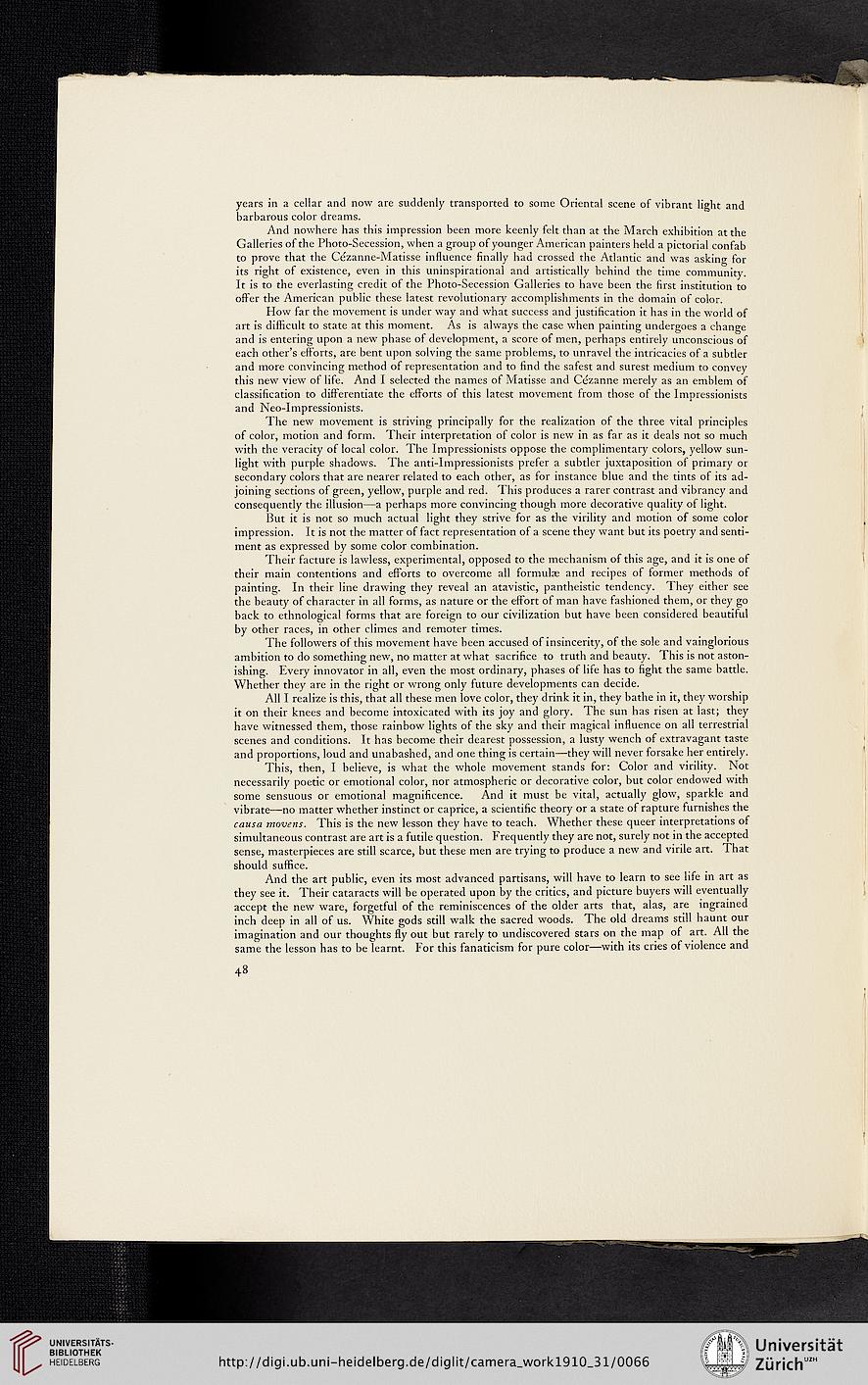 Information about OCR text
years in a cellar and now are suddenly transported to some Oriental scene of vibrant light and
barbarous color dreams.
And nowhere has this impression been more keenly felt than at the March exhibition at the
Galleries of the Photo-Secession, when a group of younger American painters held a pictorial confab
to prove that the Cézanne-Matisse influence finally had crossed the Atlantic and was asking for
its right of existence, even in this uninspirational and artistically behind the time community.
It is to the everlasting credit of the Photo-Secession Galleries to have been the first institution to
offer the American public these latest revolutionary accomplishments in the domain of color.
How far the movement is under way and what success and justification it has in the world of
art is difficult to state at this moment. As is always the case when painting undergoes a change
and is entering upon a new phase of development, a score of men, perhaps entirely unconscious of
each other’sefforts, are bent upon solving the same problems, to unravel the intricacies of a subtler
and more convincing method of representation and to find the safest and surest medium to convey
this new view of life. And I selected the names of Matisse and Cézanne merely as an emblem of
classification to differentiate the efforts of this latest movement from those of the Impressionists
and Neo-Impressionists.
The new movement is striving principally for the realization of the three vital principles
of color, motion and form. Their interpretation of color is new in as far as it deals not so much
with the veracity of local color. The Impressionists oppose the complimentary colors, yellow sun-
light with purple shadows. The anti-Impressionists prefer a subtler juxtaposition of primary or
secondary colors that are nearer related to each other, as for instance blue and the tints of its ad-
joining sections of green, yellow, purple and red. This produces a rarer contrast and vibrancy and
consequently the illusion—a perhaps more convincing though more decorative quality of light.
But it is not so much actual light they strive for as the virility and motion of some color
impression. It is not the matter of fact representation of a scene they want but its poetry and senti-
ment as expressed by some color combination.
Their facture is lawless, experimental, opposed to the mechanism of this age, and it is one of
their main contentions and efforts to overcome all formulæ and recipes of former methods of
painting. In their line drawing they reveal an atavistic, pantheistic tendency. They either see
the beauty of character in all forms, as nature or the effort of man have fashioned them, or they go
back to ethnological forms that are foreign to our civilization but have been considered beautiful
by other races, in other climes and remoter times.
The followers of this movement have been accused of insincerity, of the sole and vainglorious
ambition to do something new, no matter at what sacrifice to truth and beauty. This is not aston-
ishing. Every innovator in all, even the most ordinary, phases of life has to fight the same battle.
Whether they are in the right or wrong only future developments can decide.
All I realize is this, that all these men love color, they drink it in, they bathe in it, they worship
it on their knees and become intoxicated with its joy and glory. The sun has risen at last; they
have witnessed them, those rainbow lights of the sky and their magical influence on all terrestrial
scenes and conditions. It has become their dearest possession, a lusty wench of extravagant taste
and proportions, loud and unabashed, and one thing is certain—they will never forsake her entirely.
This, then, I believe, is what the whole movement stands for: Color and virility. Not
necessarily poetic or emotional color, nor atmospheric or decorative color, but color endowed with
some sensuous or emotional magnificence. And it must be vital, actually glow, sparkle and
vibrate—no matter whether instinct or caprice, a scientific theory or a state of rapture furnishes the
causa movens. This is the new lesson they have to teach. Whether these queer interpretations of
simultaneous contrast are art is a futile question. Frequently they are not, surely not in the accepted
sense, masterpieces are still scarce, but these men are trying to produce a new and virile art. That
should suffice.
And the art public, even its most advanced partisans, will have to learn to see life in art as
they see it. Their cataracts will be operated upon by the critics, and picture buyers will eventually
accept the new ware, forgetful of the reminiscences of the older arts that, alas, are ingrained
inch deep in all of us. White gods still walk the sacred woods. The old dreams still haunt our
imagination and our thoughts fly out but rarely to undiscovered stars on the map of art. All the
same the lesson has to be learnt. For this fanaticism for pure color—with its cries of violence and