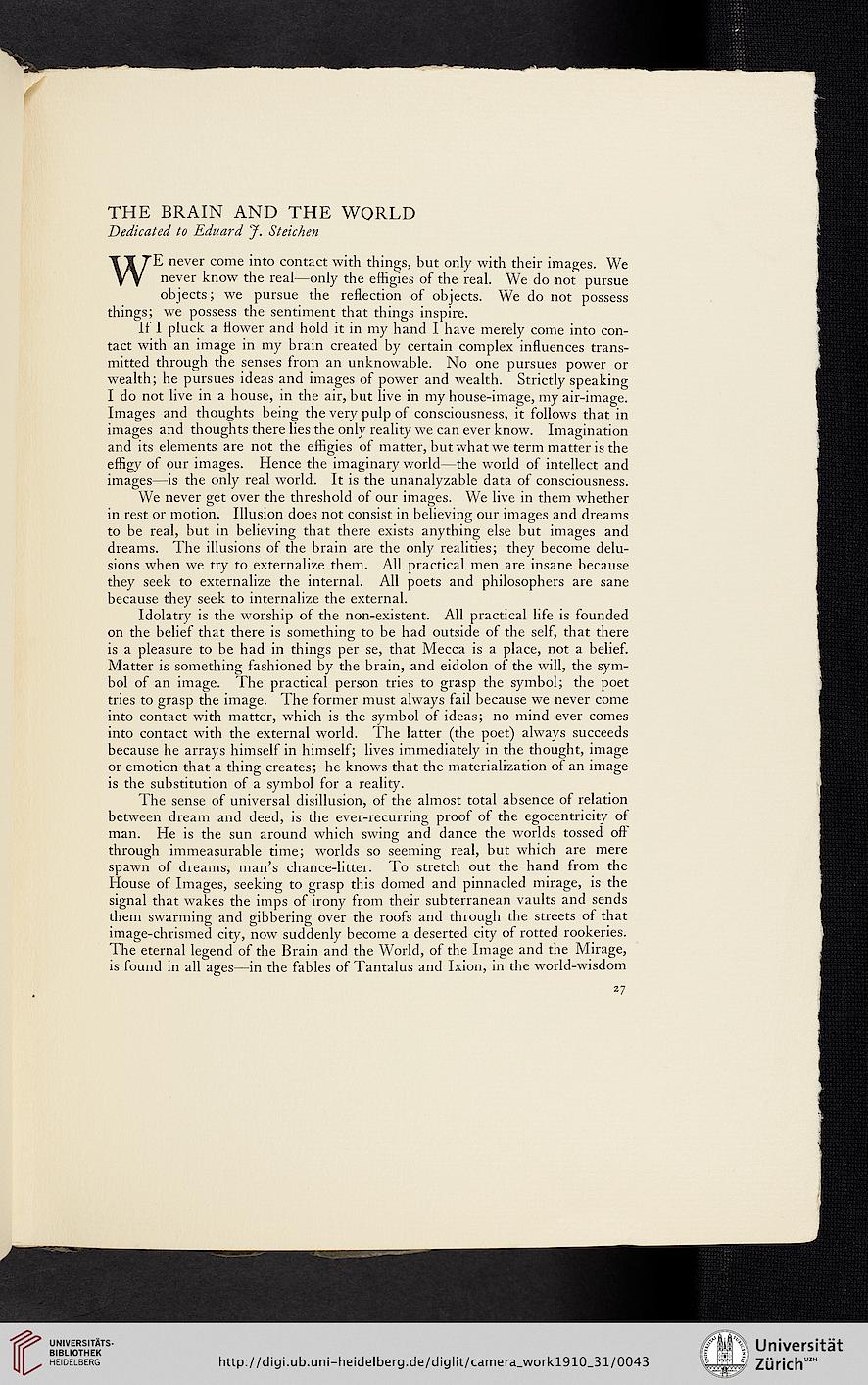 THE BRAIN AND THE WORLD
Dedicated to Eduard J. Steichen
WE never come into contact with things, but only with their images. We
never know the real—only the effigies of the real. We do not pursue
objects; we pursue the reflection of objects. We do not possess
things; we possess the sentiment that things inspire.
If I pluck a flower and hold it in my hand I have merely come into con-
tact with an image in my brain created by certain complex influences trans-
mitted through the senses from an unknowable. No one pursues power or
wealth; he pursues ideas and images of power and wealth. Strictly speaking
I do not live in a house, in the air, but live in my house-image, my air-image.
Images and thoughts being the very pulp of consciousness, it follows that in
images and thoughts there lies the only reality we can ever know. Imagination
and its elements are not the effigies of matter, but what we term matter is the
effigy of our images. Hence the imaginary world—the world of intellect and
images—is the only real world. It is the unanalyzable data of consciousness.
We never get over the threshold of our images. We live in them whether
in rest or motion. Illusion does not consist in believing our images and dreams
to be real, but in believing that there exists anything else but images and
dreams. The illusions of the brain are the only realities; they become delu-
sions when we try to externalize them. All practical men are insane because
they seek to externalize the internal. All poets and philosophers are sane
because they seek to internalize the external.
Idolatry is the worship of the non-existent. All practical life is founded
on the belief that there is something to be had outside of the self, that there
is a pleasure to be had in things per se, that Mecca is a place, not a belief.
Matter is something fashioned by the brain, and eidolon of the will, the sym-
bol of an image. The practical person tries to grasp the symbol; the poet
tries to grasp the image. The former must always fail because we never come
into contact with matter, which is the symbol of ideas; no mind ever comes
into contact with the external world. The latter (the poet) always succeeds
because he arrays himself in himself; lives immediately in the thought, image
or emotion that a thing creates; he knows that the materialization of an image
is the substitution of a symbol for a reality.
The sense of universal disillusion, of the almost total absence of relation
between dream and deed, is the ever-recurring proof of the egocentricity of
man. He is the sun around which swing and dance the worlds tossed off
through immeasurable time; worlds so seeming real, but which are mere
spawn of dreams, man's chance-litter. To stretch out the hand from the
House of Images, seeking to grasp this domed and pinnacled mirage, is the
signal that wakes the imps of irony from their subterranean vaults and sends
them swarming and gibbering over the roofs and through the streets of that
image-chrismed city, now suddenly become a deserted city of rotted rookeries.
The eternal legend of the Brain and the World, of the Image and the Mirage,
is found in all ages—in the fables of Tantalus and Ixion, in the world-wisdom