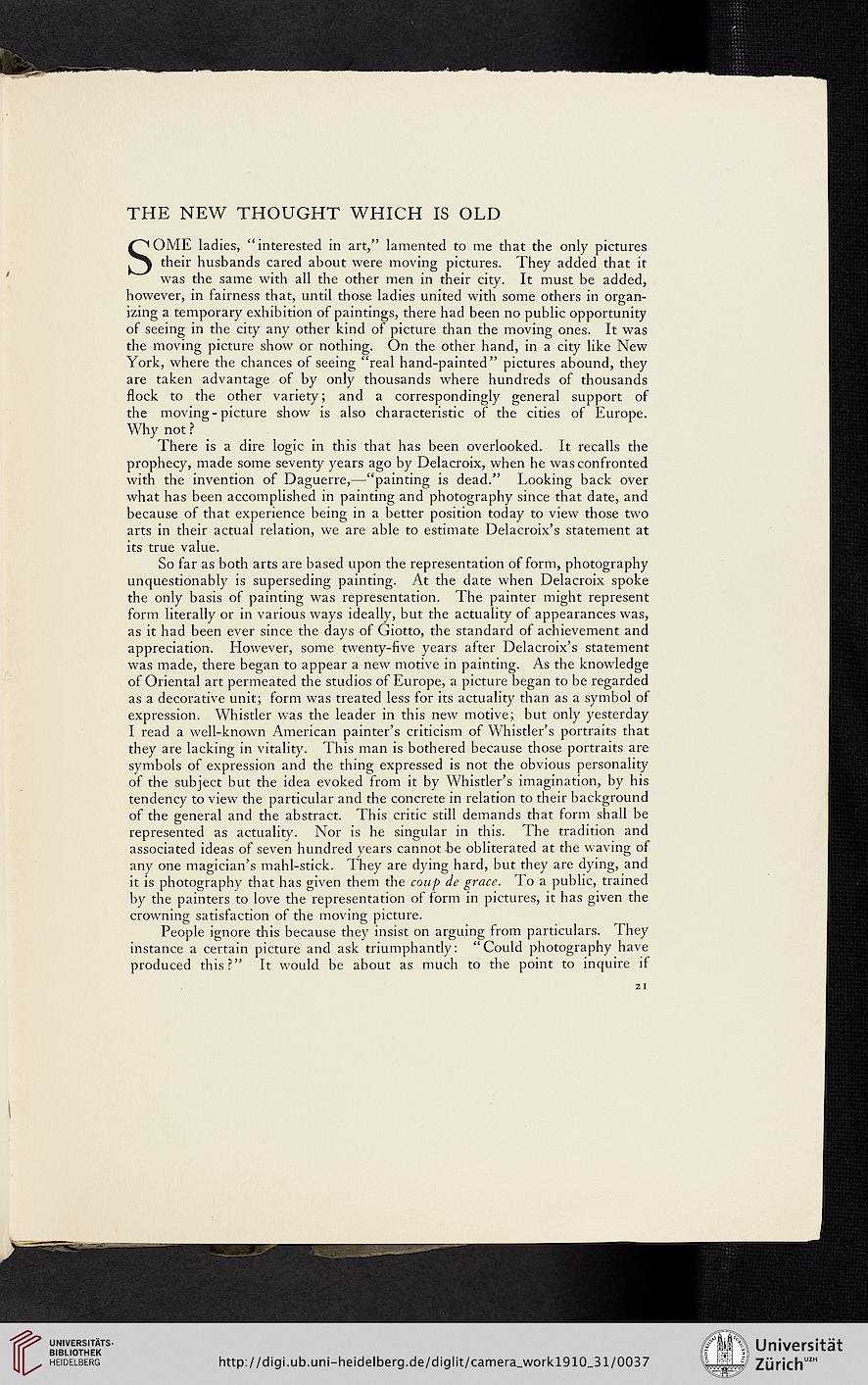 Information about OCR text
THE NEW THOUGHT WHICH IS OLD

SOME ladies, “interested in art,” lamented to me that the only pictures
their husbands cared about were moving pictures. They added that it
was the same with all the other men in their city. It must be added,
however, in fairness that, until those ladies united with some others in organ-
izing a temporary exhibition of paintings, there had been no public opportunity
of seeing in the city any other kind of picture than the moving ones. It was
the moving picture show or nothing. On the other hand, in a city like New
York, where the chances of seeing “real hand-painted” pictures abound, they
are taken advantage of by only thousands where hundreds of thousands
flock to the other variety; and a correspondingly general support of
the moving-picture show is also characteristic of the cities of Europe.
Why not ?
There is a dire logic in this that has been overlooked. It recalls the
prophecy, made some seventy years ago by Delacroix, when he was confronted
with the invention of Daguerre,—“painting is dead.” Looking back over
what has been accomplished in painting and photography since that date, and
because of that experience being in a better position today to view those two
arts in their actual relation, we are able to estimate Delacroix’s statement at
its true value.
So far as both arts are based upon the representation of form, photography
unquestionably is superseding painting. At the date when Delacroix spoke
the only basis of painting was representation. The painter might represent
form literally or in various ways ideally, but the actuality of appearances was,
as it had been ever since the days of Giotto, the standard of achievement and
appreciation. However, some twenty-five years after Delacroix’s statement
was made, there began to appear a new motive in painting. As the knowledge
of Oriental art permeated the studios of Europe, a picture began to be regarded
as a decorative unit; form was treated less for its actuality than as a symbol of
expression. Whistler was the leader in this new motive; but only yesterday
I read a well-known American painter’s criticism of Whistler’s portraits that
they are lacking in vitality. This man is bothered because those portraits are
symbols of expression and the thing expressed is not the obvious personality
of the subject but the idea evoked from it by Whistler’s imagination, by his
tendency to view the particular and the concrete in relation to their background
of the general and the abstract. This critic still demands that form shall be
represented as actuality. Nor is he singular in this. The tradition and
associated ideas of seven hundred years cannot be obliterated at the waving of
any one magician’s mahl-stick. They are dying hard, but they are dying, and
it is photography that has given them the coup de grace. To a public, trained
by the painters to love the representation of form in pictures, it has given the
crowning satisfaction of the moving picture.
People ignore this because they insist on arguing from particulars. They
instance a certain picture and ask triumphantly: “Could photography have
produced this?” It would be about as much to the point to inquire if