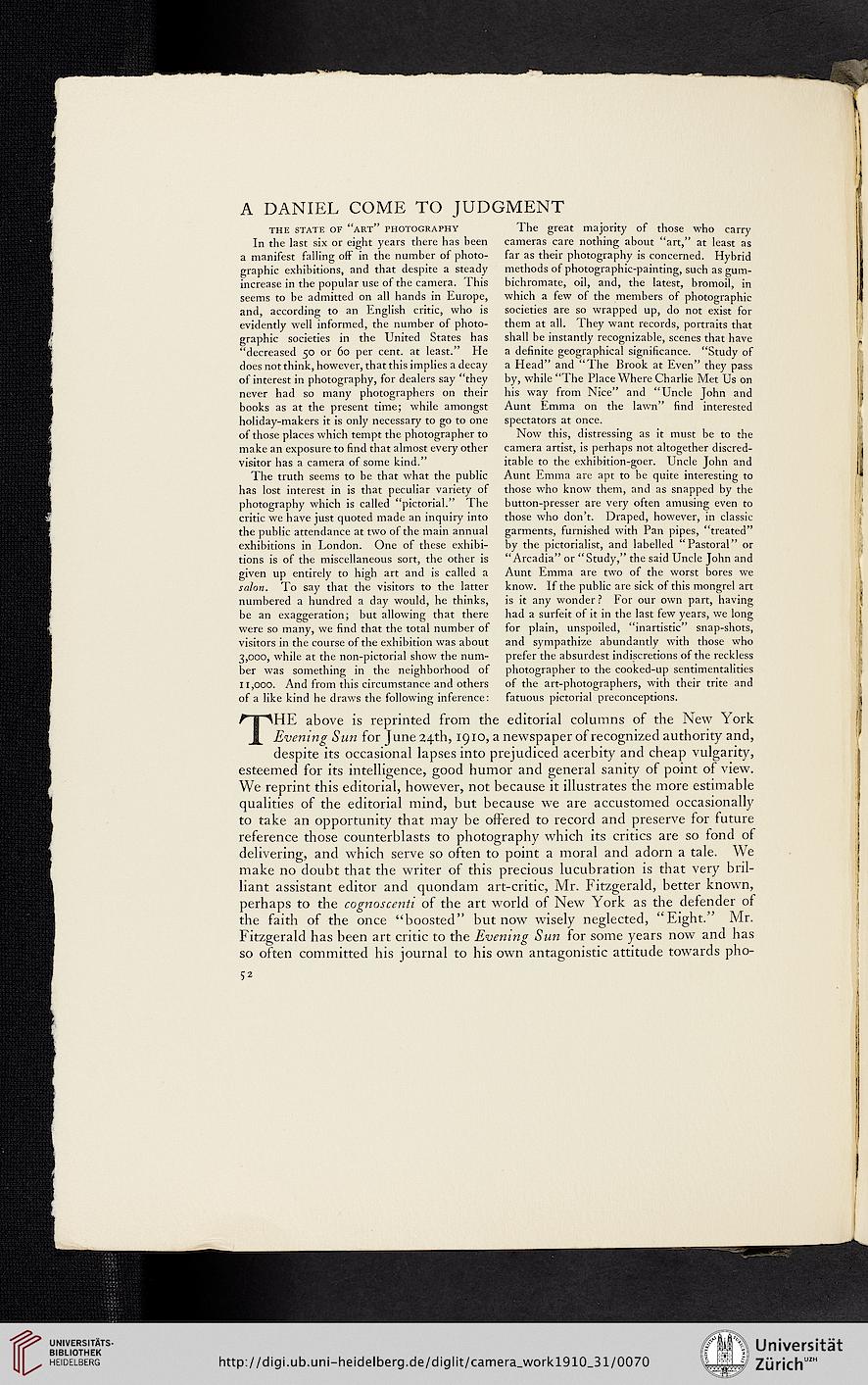 Information about OCR text
A DANIEL COME TO JUDGMENT

THE STATE OF ART PHOTOGRAPHY
In the last six or eight years there has been
a manifest falling off in the number of photo-
graphic exhibitions, and that despite a steady
increase in the popular use of the camera. This
seems to be admitted on all hands in Europe,
and, according to an English critic, who is
evidently well informed, the number of photo-
graphic societies in the United States has
“decreased 50 or 60 per cent. at least.” He
does not think, however, that this implies a decay
of interest in photography, for dealers say “they
never had so many photographers on their
books as at the present time; while amongst
holiday-makers it is only necessary to go to one
of those places which tempt the photographer to
make an exposure to find that almost every other
visitor has a camera of some kind.”
The truth seems to be that what the public
has lost interest in is that peculiar variety of
photography which is called “pictorial.” The
critic we have just quoted made an inquiry into
the public attendance at two of the main annual
exhibitions in London. One of these exhibi-
tions is of the miscellaneous sort, the other is
given up entirely to high art and is called a
salon. To say that the visitors to the latter
numbered a hundred a day would, he thinks,
be an exaggeration; but allowing that there
were so many, we find that the total number of
visitors in the course of the exhibition was about
3,000, while at the non-pictorial show the num-
ber was something in the neighborhood of
11,000. And from this circumstance and others
of a like kind he draws the following inference:

The great majority of those who carry
cameras care nothing about “art,” at least as
far as their photography is concerned. Hybrid
methods of photographic-painting, such as gum-
bichromate, oil, and, the latest, bromoil, in
which a few of the members of photographic
societies are so wrapped up, do not exist for
them at all. They want records, portraits that
shall be instantly recognizable, scenes that have
a definite geographical significance. “Study of
a Head” and “The Brook at Even” they pass
by, while “The Place Where Charlie Met Us on
his way from Nice” and “Uncle John and
Aunt Emma on the lawn” find interested
spectators at once.
Now this, distressing as it must be to the
camera artist, is perhaps not altogether discred-
itable to the exhibition-goer. Uncle John and
Aunt Emma are apt to be quite interesting to
those who know them, and as snapped by the
button-presser are very often amusing even to
those who don’t. Draped, however, in classic
garments, furnished with Pan pipes, “treated”
by the pictorialist, and labelled “Pastoral” or
“Arcadia” or “Study,” the said Uncle John and
Aunt Emma are two of the worst bores we
know. If the public are sick of this mongrel art
is it any wonder ? For our own part, having
had a surfeit of it in the last few years, we long
for plain, unspoiled, “inartistic” snap-shots,
and sympathize abundantly with those who
prefer the absurdest indiscretions of the reckless
photographer to the cooked-up sentimentalities
of the art-photographers, with their trite and
fatuous pictorial preconceptions.

THE above is reprinted from the editorial columns of the New York
Evening Sun for June 24th, 1910, a newspaper of recognized authority and,
despite its occasional lapses into prejudiced acerbity and cheap vulgarity,
esteemed for its intelligence, good humor and general sanity of point of view.
We reprint this editorial, however, not because it illustrates the more estimable
qualities of the editorial mind, but because we are accustomed occasionally
to take an opportunity that may be offered to record and preserve for future
reference those counterblasts to photography which its critics are so fond of
delivering, and which serve so often to point a moral and adorn a tale. We
make no doubt that the writer of this precious lucubration is that very bril-
liant assistant editor and quondam art-critic, Mr. Fitzgerald, better known,
perhaps to the cognoscenti of the art world of New York as the defender of
the faith of the once “boosted” but now wisely neglected, “Eight.” Mr.
Fitzgerald has been art critic to the Evening Sun for some years now and has
so often committed his journal to his own antagonistic attitude towards pho-