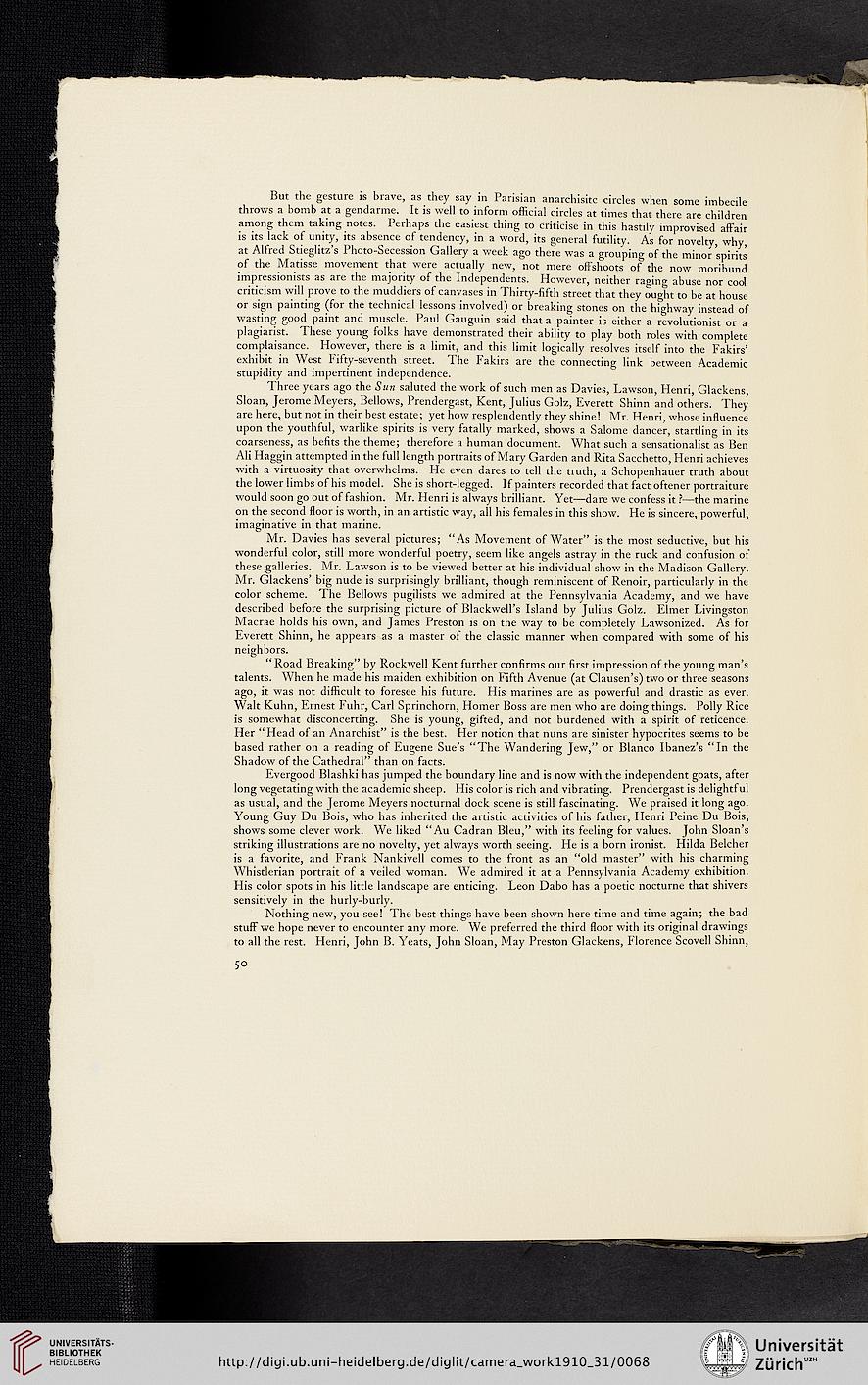 Information about OCR text
But the gesture is brave, as they say in Parisian anarchisitc circles when some imbecile
throws a bomb at a gendarme. It is well to inform official circles at times that there are children
among them taking notes. Perhaps the easiest thing to criticise in this hastily improvised affair
is its lack of unity, its absence of tendency, in a word, its general futility. As for novelty, why,
at Alfred Stieglitz’s Photo-Secession Gallery a week ago there was a grouping of the minor spirits
of the Matisse movement that were actually new, not mere offshoots of the now moribund
impressionists as are the majority of the Independents. However, neither raging abuse nor cool
criticism will prove to the muddiers of canvases in Thirty-fifth street that they ought to be at house
or sign painting (for the technical lessons involved) or breaking stones on the highway instead of
wasting good paint and muscle. Paul Gauguin said that a painter is either a revolutionist or a
plagiarist. These young folks have demonstrated their ability to play both roles with complete
complaisance. However, there is a limit, and this limit logically resolves itself into the Fakirs’
exhibit in West Fifty-seventh street. The Fakirs are the connecting link between Academic
stupidity and impertinent independence.
Three years ago the Sun saluted the work of such men as Davies, Lawson, Henri, Glackens,
Sloan, Jerome Meyers, Bellows, Prendergast, Kent, Julius Golz, Everett Shinn and others. They
are here, but not in their best estate; yet how resplendently they shine! Mr. Henri, whose influence
upon the youthful, warlike spirits is very fatally marked, shows a Salome dancer, startling in its
coarseness, as befits the theme; therefore a human document. What such a sensationalist as Ben
Ali Haggin attempted in the full length portraits of Mary Garden and Rita Sacchetto, Henri achieves
with a virtuosity that overwhelms. He even dares to tell the truth, a Schopenhauer truth about
the lower limbs of his model. She is short-legged. If painters recorded that fact oftener portraiture
would soon go out of fashion. Mr. Henri is always brilliant. Yet—dare we confess it ?—the marine
on the second floor is worth, in an artistic way, all his females in this show. He is sincere, powerful,
imaginative in that marine.
Mr. Davies has several pictures; “As Movement of Water” is the most seductive, but his
wonderful color, still more wonderful poetry, seem like angels astray in the ruck and confusion of
these galleries. Mr. Lawson is to be viewed better at his individual show in the Madison Gallery.
Mr. Glackens’ big nude is surprisingly brilliant, though reminiscent of Renoir, particularly in the
color scheme. The Bellows pugilists we admired at the Pennsylvania Academy, and we have
described before the surprising picture of Blackwell’s Island by Julius Golz. Elmer Livingston
Macrae holds his own, and James Preston is on the way to be completely Lawsonized. As for
Everett Shinn, he appears as a master of the classic manner when compared with some of his
neighbors.
“ Road Breaking” by Rockwell Kent further confirms our first impression of the young man’s
talents. When he made his maiden exhibition on Fifth Avenue (at Clausen’s) two or three seasons
ago, it was not difficult to foresee his future. His marines are as powerful and drastic as ever.
Walt Kuhn, Ernest Fuhr, Carl Sprinchorn, Homer Boss are men who are doing things. Polly Rice
is somewhat disconcerting. She is young, gifted, and not burdened with a spirit of reticence.
Her “Head of an Anarchist” is the best. Her notion that nuns are sinister hypocrites seems to be
based rather on a reading of Eugene Sue’s “The Wandering Jew,” or Blanco Ibanez’s “In the
Shadow of the Cathedral” than on facts.
Evergood Blashki has jumped the boundary line and is now with the independent goats, after
long vegetating with the academic sheep. His color is rich and vibrating. Prendergast is delightful
as usual, and the Jerome Meyers nocturnal dock scene is still fascinating. We praised it long ago.
Young Guy Du Bois, who has inherited the artistic activities of his father, Henri Peine Du Bois,
shows some clever work. We liked “Au Cadran Bleu,” with its feeling for values. John Sloan’s
striking illustrations are no novelty, yet always worth seeing. He is a born ironist. Hilda Belcher
is a favorite, and Frank Nankivell comes to the front as an “old master” with his charming
Whistlerian portrait of a veiled woman. We admired it at a Pennsylvania Academy exhibition.
His color spots in his little landscape are enticing. Leon Dabo has a poetic nocturne that shivers
sensitively in the hurly-burly.
Nothing new, you see! The best things have been shown here time and time again; the bad
stuff we hope never to encounter any more. We preferred the third floor with its original drawings
to all the rest. Henri, John B. Yeats, John Sloan, May Preston Glackens, Florence Scovell Shinn,