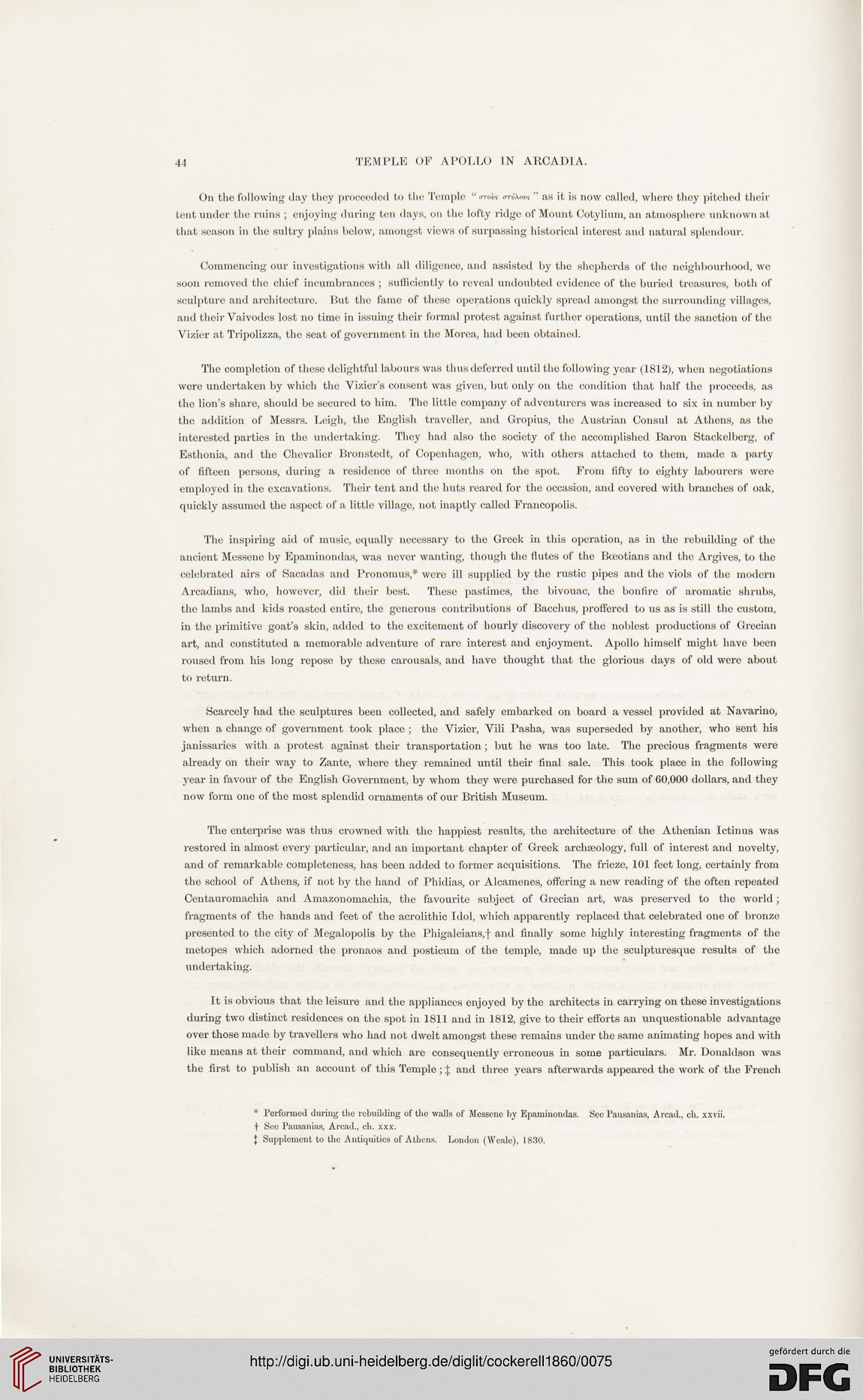 Information about OCR text
44 TEMPLE OF APOLLO IN ARCADIA.

On the following day they proceeded to the Temple "orofcs crriXovs " as it is now called, where they pitched their
tent under the ruins ; enjoying during ten days, on the lofty ridge of Mount Cotylium, an atmosphere unknown at
that season in the sultry plains below, amongst views of surpassing historical interest and natural splendour.

Commencing our investigations with all diligence, and assisted by the shepherds of the neighbourhood, we
soon removed the chief incumbrances ; sufficiently to reveal undoubted evidence of the buried treasures, both of
sculpture and architecture. But the fame of these operations quickly spread amongst the surrounding villages,
and their Vaivodes lost no time in issuing their formal protest against further operations, until the sanction of the
Vizier at Tripolizza, the seat of government in the Morea, had been obtained.

The completion of these delightful labours was thus deferred until the following year (1812), when negotiations
were undertaken by which the Vizier's consent was given, but only on the condition that half the proceeds, as
the lion's share, should be secured to him. The little company of adventurers was increased to six in number by
the addition of Messrs. Leigh, the English traveller, and Gropius, the Austrian Consul at Athens, as the
interested parties in the undertaking. They had also the society of the accomplished Baron Stackelberg, of
Esthonia, and the Chevalier Bronstedt, of Copenhagen, who, with others attached to them, made a party
of fifteen persons, during a residence of three months on the spot. From fifty to eighty labourers were
employed in the excavations. Their tent and the huts reared for the occasion, and covered with branches of oak,
quickly assumed the aspect of a little village, not inaptly called Francopolis.

The inspiring aid of music, equally necessary to the Greek in this operation, as in the rebuilding of the
ancient Messene by Epaminondas, was never wanting, though the flutes of the Boeotians and the Argives, to the
celebrated airs of Sacadas and Pronomus,* were ill supplied by the rustic pipes and the viols of the modern
Arcadians, who, however, did their best. These pastimes, the bivouac, the bonfire of aromatic shrubs,
the lambs and kids roasted entire, the generous contributions of Bacchus, proffered to us as is still the custom,
in the primitive goat's skin, added to the excitement of hourly discovery of the noblest productions of Grecian
art, and constituted a memorable adventure of rare interest and enjoyment. Apollo himself might have been
roused from his long repose by these carousals, and have thought that the glorious days of old were about
to return.

Scarcely had the sculptures been collected, and safely embarked on board a vessel provided at Navarino,
when a change of government took place ; the Vizier, Vili Pasha, was superseded by another, who sent his
janissaries with a protest against their transportation; but he was too late. The precious fragments were
already on their way to Zante, where they remained until their final sale. This took place in the following-
year in favour of the English Government, by whom they were purchased for the sum of 60,000 dollars, and they
now form one of the most splendid ornaments of our British Museum.

The enterprise was thus crowned with the happiest results, the architecture of the Athenian Ictinus was
restored in almost every particular, and an important chapter of Greek archaeology, full of interest and novelty,
and of remarkable completeness, has been added to former acquisitions. The frieze, 101 feet long, certainly from
the school of Athens, if not by the hand of Phidias, or Alcamenes, offering a new reading of the often repeated
Centauromachia and Amazonomachia, the favourite subject of Grecian art, was preserved to the world;
fragments of the hands and feet of the acrolithic Idol, which apparently replaced that celebrated one of bronze
presented to the city of Megalopolis by the Phigaleians,f and finally some highly interesting fragments of the
metopes which adorned the pronaos and posticum of the temple, made up the sculpturesque results of the
undertaking.

It is obvious that the leisure and the appliances enjoyed by the architects in carrying on these investigations
during two distinct residences on the spot in 1811 and in 1812, give to their efforts an unquestionable advantage
over those made by travellers who had not dwelt amongst these remains under the same animating hopes and with
like means at their command, and which are consequently erroneous in some particulars. Mr. Donaldson was
the first to publish an account of this Temple; £ and three years afterwards appeared the work of the French

* Performed during the rebuilding of the walls of Messene by Epaminondas. See Pausanias, Arcad., ch. xxvii.

I Supplement to the Antiquities of Athens. London (Weale), 1830.