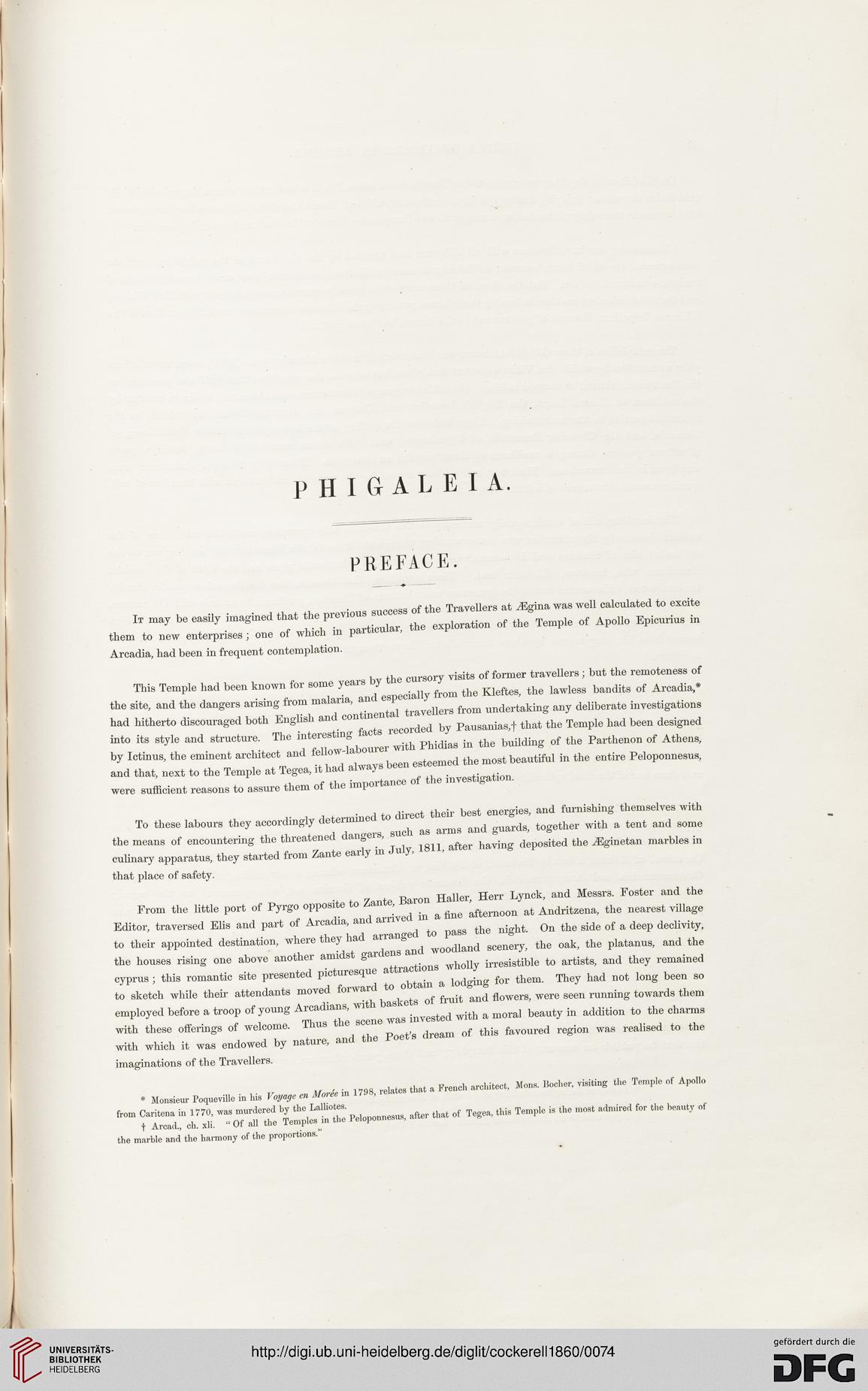 Information about OCR text
p H I GAL E I A.

, xx. s«n- miccess of the Travellers at ^gina was well calculated to excite

IT may be easily imagined that ^~ZZ^ exploration of the Temple of Apollo Epicnrius in
them to new enterprises ; one of which m particular, tne p
Arcadia, had been in frequent contemplation.

the site, and the dangers arising from malaria, an ejp ^^ ^ undertaking any deliberate investigations
had hitherto discouraged both English and con men a^^ ^ pausanias,t that the Temple had been designed
into its style and structure. The interesting ac^ ^ phidiag in the building 0f the Parthenon of Athens,
by Ictinus, the eminent architect and fellow- a ^ most beautifui in the entire Peloponnesus,

and that, next to the Temple at Tegea, it had always been e

*i. ^ +Kp imBortance of the investigation,
were sufficient reasons to assure them of the import

a- i ,Wniuned to direct their best energies, and furnishing themselves with
To these labours they accordingly determmeu ^ ^^ ^ ^^ together with a tent and some

the means of encountering the threatened dangers, sue ^ deposited the ^ginetan marbles in

culinary apparatus, they started from Zante early m July,
that place of safety.

From the little port of Pyrgo opposite to Zante, ^ ^ ^ afternoon at Andritzena, the nearest village

Editor, traversed Elis and part of Arcadia, and arrive in ^ ^ ^ ^ ^ declivity,

+1-. "Kofi arranged to pdb» <j±ao -u-is
to their appointed destination, where tney nau & w00dland scenery, the oak, the platanus, and the

the houses rising one above another amidst ^^^.^ wholly irresistible to artists, and they remained
Cyprus ; this romantic site presented picturesque a rac^ ^ lodging for them. They had not long been so
to sketch while their attendants moved forwa °^ ^ ^^ and flowerSj were seen running towards them

employed before a troop of young Arcadians, with^ ^J.^^ ^ ft moral beauty in addition to the charms
with these offerings of welcome. Thus the scene w fav0Ured region was realised to the

with which it was endowed by nature, and the Poets
imaginations of the Travellers.

„ ' ■ 1798 relates that a French architect, Mons. Bocher, visiting the Temple of Apollo
* Monsieur Poqueville in his Voyage en Moree in 1798, lelates
from Caritena in 1770, was murdered ^££°j£ Peloponnesus, after that of Tegea, this Temple is the most admired for the beauty of

the marble and the harmony of the proportions."