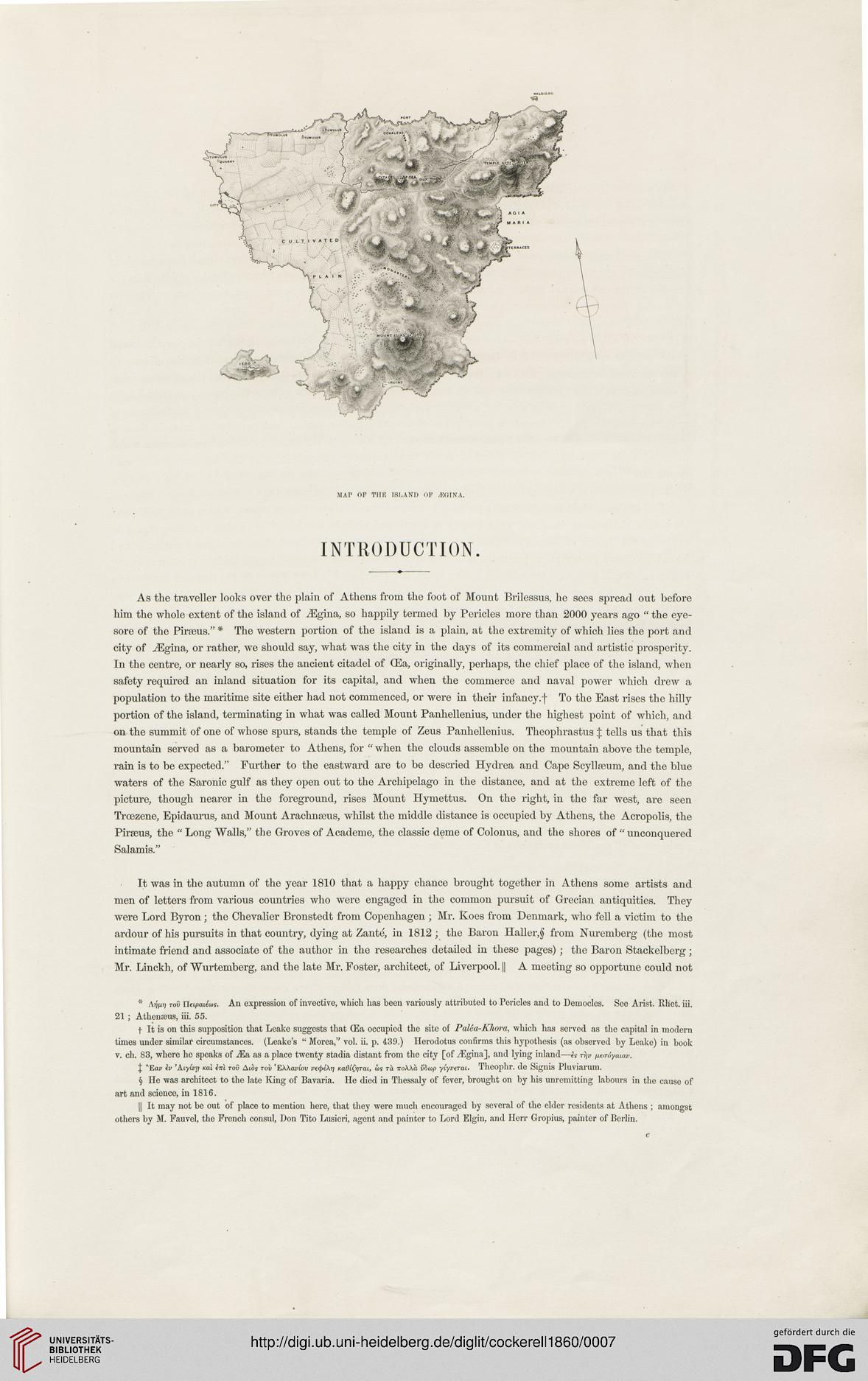 MAP OP THE ISLAND OF ,'EGINA.

As the traveller looks over the plain of Athens from the foot of Mount Brilessus, he sees spread out before
him the whole extent of the island of iEgina, so happily termed by Pericles more than 2000 years ago " the eye-
sore of the Pirceus." * The western portion of the island is a plain, at the extremity of which lies the port and
city of iEgina, or rather, we should say, what was the city in the days of its commercial and artistic prosperity.
In the centre, or nearly so, rises the ancient citadel of (Ea, originally, perhaps, the chief place of the island, when
safety required an inland situation for its capital, and when the commerce and naval power which drew a
population to the maritime site either had not commenced, or were in their infancy.-]- To the East rises the hilly
portion of the island, terminating in what was called Mount Panhellenius, under the highest point of which, and
on the summit of one of whose spurs, stands the temple of Zeus Panhellenius. Theophrastus £ tells us that this
mountain served as a barometer to Athens, for "when the clouds assemble on the mountain above the temple,
rain is to be expected." Further to the eastward are to be descried Hydrea and Cape Scyllaeum, and the blue
waters of the Saronic gulf as they open out to the Archipelago in the distance, and at the extreme left of the
picture, though nearer in the foreground, rises Mount Hymettus. On the right, in the far west, are seen
Trcezene, Epidaurus, and Mount Arachneeus, whilst the middle distance is occupied by Athens, the Acropolis, the
Piraeus, the " Long Walls," the Groves of Academe, the classic deme of Colonus, and the shores of " unconquered
Salamis."

It was in the autumn of the year 1810 that a happy chance brought together in Athens some artists and
men of letters from various countries who were engaged in the common pursuit of Grecian antiquities. They
were Lord Byron; the Chevalier Bronstedt from Copenhagen ; Mr. Koes from Denmark, who fell a victim to the
ardour of his pursuits in that country, dying at Zante', in 1812; the Baron Haller,§ from Nuremberg (the most
intimate friend and associate of the author in the researches detailed in these pages) ; the Baron Stackelberg;
Mr. Linckh, of Wurtemberg, and the late Mr. Foster, architect, of Liverpool. || A meeting so opportune could not

* A^jj roS riei/xueW An expression of invective, which has been variously attributed to Pericles and to Democles. See Arist. Rhet. iii.
21 ; Athenseus, iii. 55.

f It is on this supposition that Leake suggests that CEa occupied the site of Palea-Khora, which has served as the capital in modern
times under similar circumstances. (Leake's " Morea," vol. ii. p. 439.) Herodotus confirms this hypothesis (as observed by Leake) in book
v. ch. 83, where he speaks of M& as a place twenty stadia distant from the city [of vEgina], and lying inland—h rfv neo-oyamv.

§ He was architect to the late King of Bavaria. He died in Thessaly of fever, brought on by his unremitting labours in the cause of
art and science, in 1816.

|| It may not be out of place to mention here, that they were much encouraged by several of the elder residents at Athens ; amongst
others by M. Fauvel, the French consul, Don Tito Lusieri, agent and painter to Lord Elgin, and Herr Gropius, painter of Berlin.