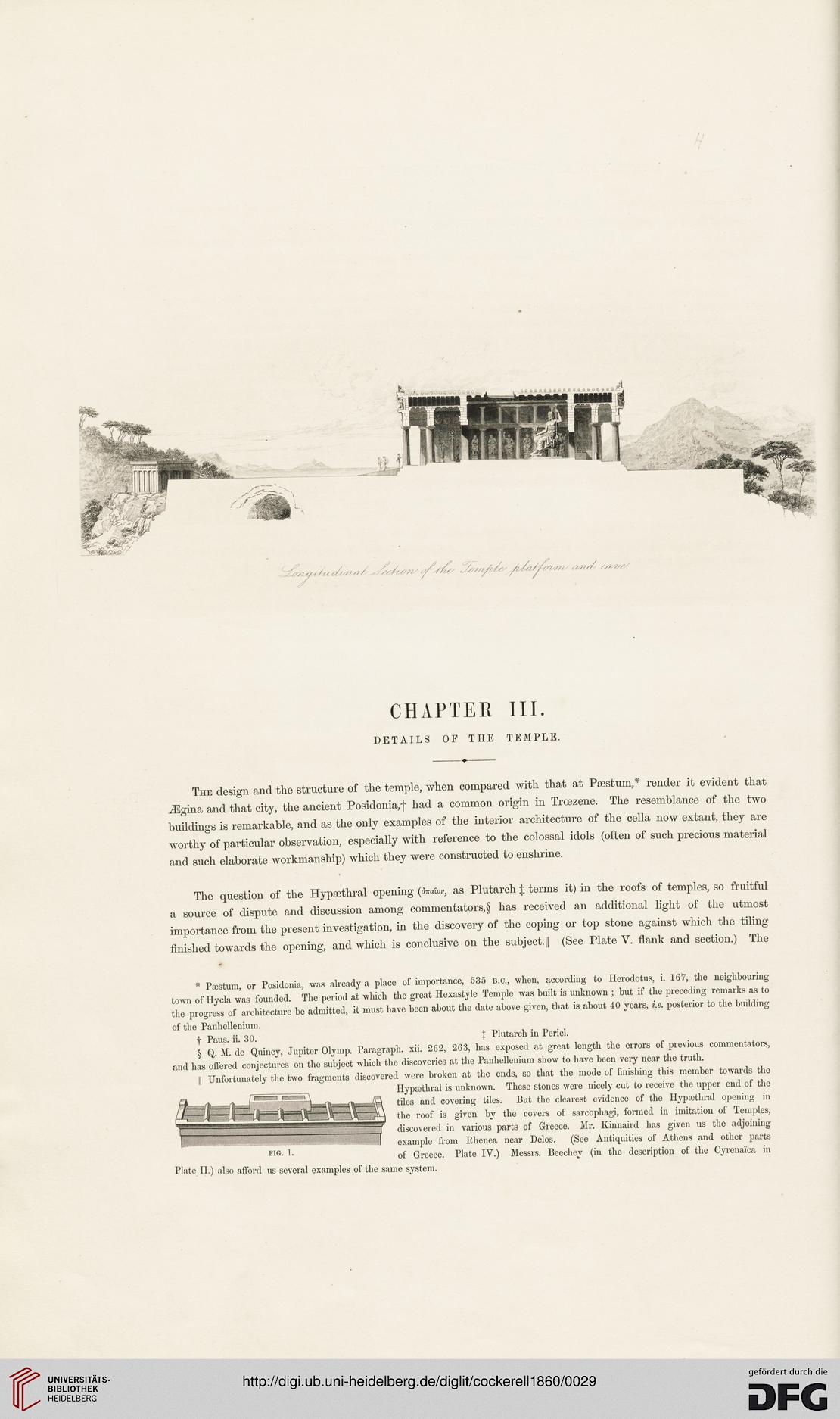 DETAILS OF THE TEMPLE.

The design and the structure of the temple, when compared with that at Psestum,* render it evident that
vEgina and that city, the ancient Posidonia,! had a common origin in Troezene. The resemblance of the two
buildings is remarkable, and as the only examples of the interior architecture of the cella now extant, they are
worthy of particular observation, especially with reference to the colossal idols (often of such precious material
and such elaborate workmanship) which they were constructed to enshrine.

The question of the Hyparthral opening (facuov, as Plutarch $ terms it) in the roofs of temples, so fruitful
a source of dispute and discussion among commentators, § has received an additional light of the utmost
importance from the present investigation, in the discovery of the coping or top stone against which the tiling
finished towards the opening, and which is conclusive on the subject. || (See Plate V. flank and section.) The

* Paostum, or Posidonia, was already a place of importance, 535 B.C., when, according to Herodotus, i. 167, the neighbouring
town of Hycla was founded. The period at which the great Hexastyle Temple was built is unknown ; but if the preceding remarks as to
the progress of architecture be admitted, it must have been about the date above given, that is about 40 years, i.e. posterior to the building
of the Panhellenium.

§ Q. M. de Quincy, Jupiter Olymp. Paragraph, xii. 262, 263, has exposed at great length the errors of previous commentators,
and has offered conjectures on the subject which the discoveries at the Panhellenium show to have been very near the truth.

|| Unfortunately the two fragments discovered were broken at the ends, so that the mode of finishing this member towards the

Hyp&thral is unknown. These stones were nicely cut to receive the upper end of the
tiles and covering tiles. But the clearest evidence of the Hypa)thral opening in
the roof is given by the covers of sarcophagi, formed in imitation of Temples,
discovered in various parts of Greece. Mr. Kinnaird has given us the adjoining
example from PJienea near Delos. (See Antiquities of Athens and other parts
of Greece. Plate IV.) Messrs. Beechey (in the description of the Cyrenaica in