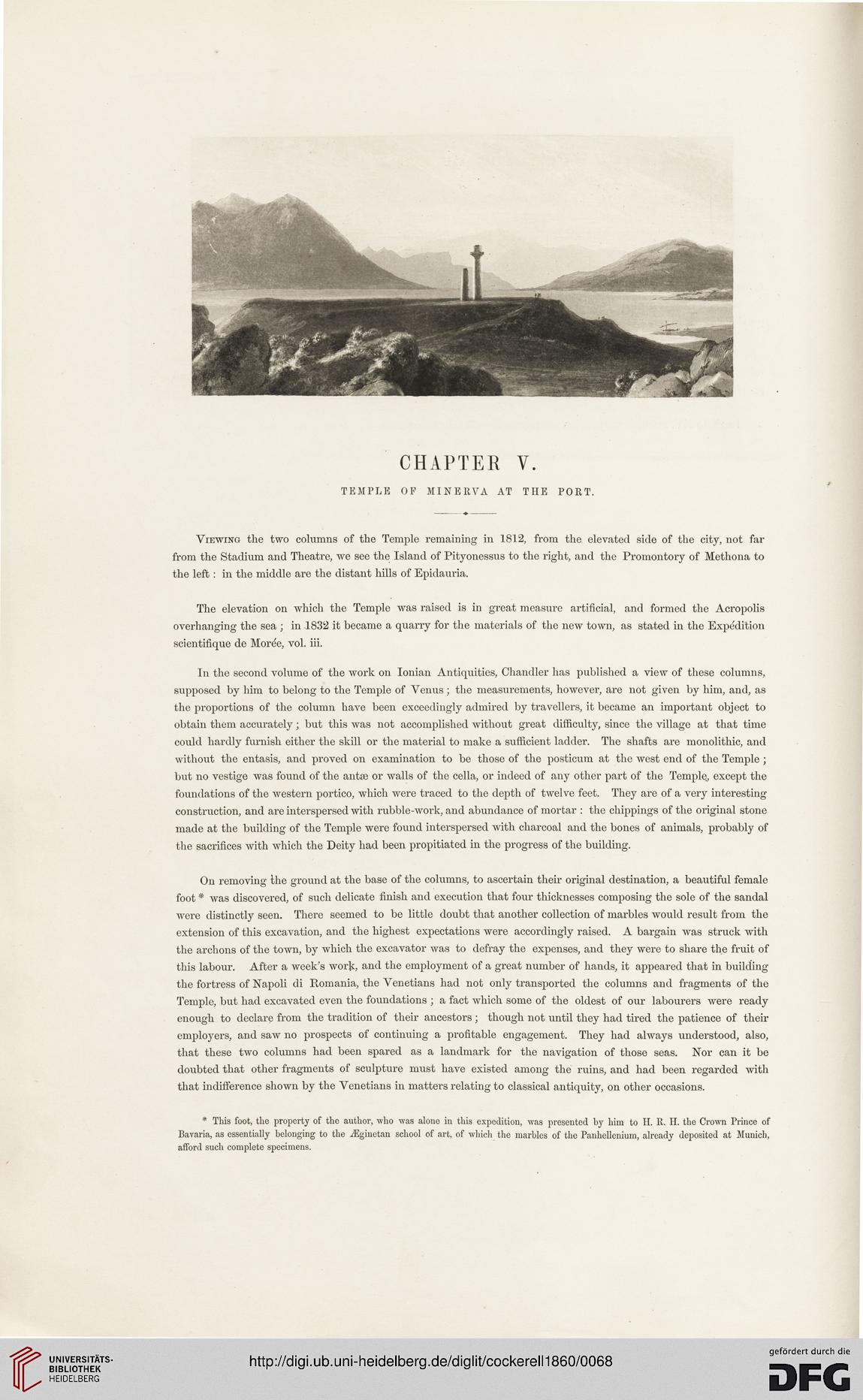 TEMPLE OF MINERVA AT THE PORT.

Viewing the two columns of the Temple remaining in 1812, from the elevated side of the city, not far
from the Stadium and Theatre, we see the Island of Pityonessus to the right, and the Promontory of Methona to
the left : in the middle are the distant hills of Epidauria.

The elevation on which the Temple was raised is in great measure artificial, and formed the Acropolis
overhanging the sea ; in 1832 it became a quarry for the materials of the new town, as stated in the Expedition
scientifique de Moree, vol. hi.

In the second volume of the work on Ionian Antiquities, Chandler has published a view of these columns,
supposed by him to belong to the Temple of Venus; the measurements, however, are not given by him, and, as
the proportions of the column have been exceedingly admired by travellers, it became an important object to
obtain them accurately; but this was not accomplished without great difficulty, since the village at that time
could hardly furnish either the skill or the material to make a sufficient ladder. The shafts are monolithic, and
without the entasis, and proved on examination to be those of the posticum at the west end of the Temple ;
but no vestige was found of the antse or walls of the cella, or indeed of any other part of the Temple, except the
foundations of the western portico, which were traced to the depth of twelve feet. They are of a very interesting
construction, and are interspersed with rubble-work, and abundance of mortar : the chippings of the original stone
made at the building of the Temple were found interspersed with charcoal and the bones of animals, probably of
the sacrifices with which the Deity had been propitiated in the progress of the building.

On removing the ground at the base of the columns, to ascertain their original destination, a beautiful female
foot# was discovered, of such delicate finish and execution that four thicknesses composing the sole of the sandal
were distinctly seen. There seemed to be little doubt that another collection of marbles would result from the
extension of this excavation, and the highest expectations were accordingly raised. A bargain was struck with
the archons of the town, by which the excavator was to defray the expenses, and they were to share the fruit of
this labour. After a week's work, and the employment of a great number of hands, it appeared that in building
the fortress of Napoli di Romania, the Venetians had not only transported the columns and fragments of the
Temple, but had excavated even the foundations ; a fact which some of the oldest of our labourers were ready
enough to declare from the tradition of their ancestors ; though not until they had tired the patience of their
employers, and saw no prospects of continuing a profitable engagement. They had always understood, also,
that these two columns had been spared as a landmark for the navigation of those seas. Nor can it be
doubted that other fragments of sculpture must have existed among the ruins, and had been regarded with
that indifference shown by the Venetians in matters relating to classical antiquity, on other occasions.

* This foot, the property of the author, who was alone in this expedition, was presented by him to H. R. H. the Crown Prince of
Bavaria, as essentially belonging to the iEginetan school of art, of which the marbles of the Panhellenium, already deposited at Munich,
afford such complete specimens.