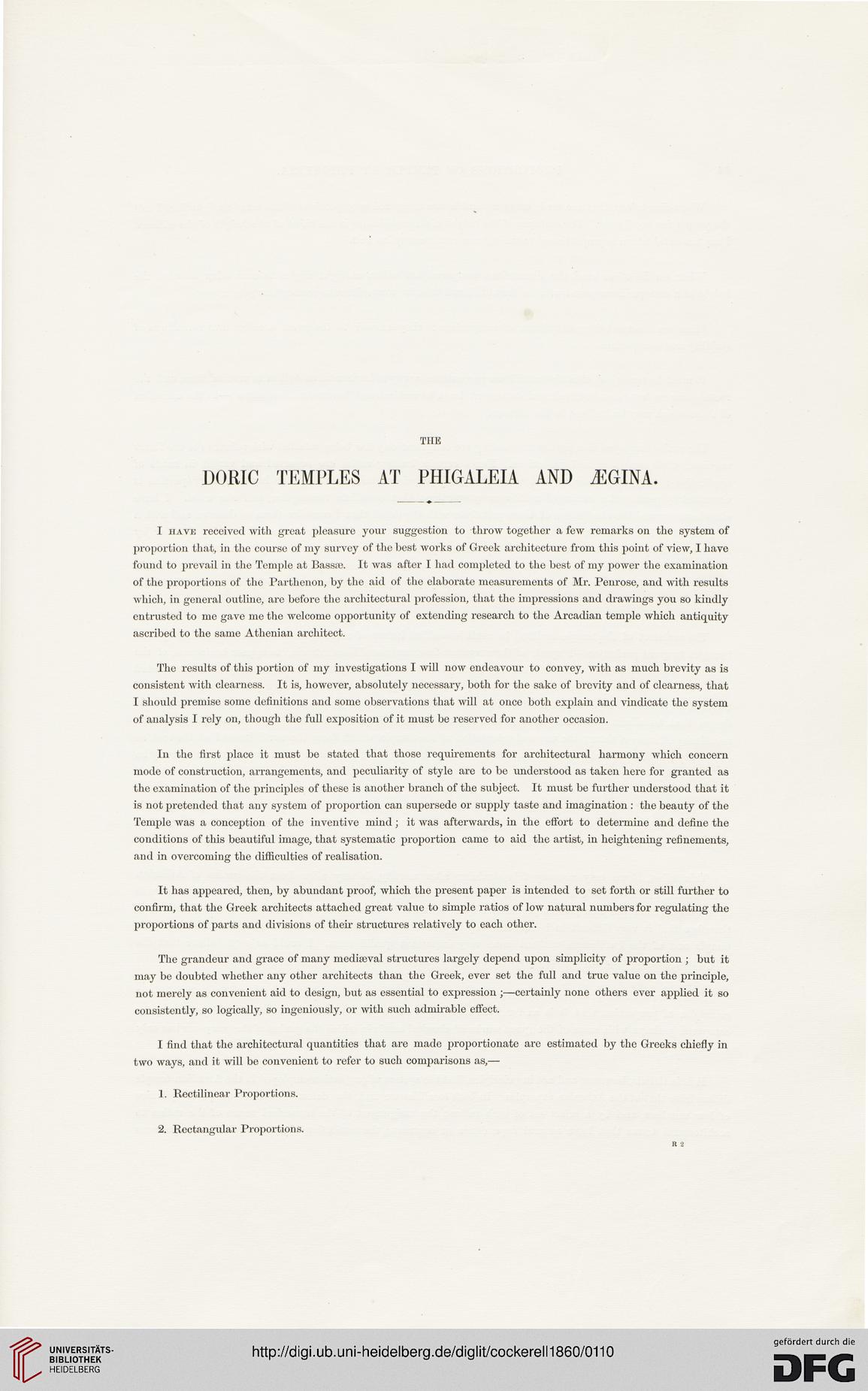 DORIC TEMPLES AT PHIGALEIA AND jEGINA.

I have received with great pleasure your suggestion to throw together a few remarks on the system of
proportion that, in the course of my survey of the best works of Greek architecture from this point of view, I have
found to prevail in the Temple at Bassa3. It was after I had completed to the best of my power the examination
of the proportions of the Parthenon, by the aid of the elaborate measurements of Mr. Penrose, and with results
which, in general outline, are before the architectural profession, that the impressions and drawings you so kindly
entrusted to me gave me the welcome opportunity of extending research to the Arcadian temple which antiquity
ascribed to the same Athenian architect.

The results of this portion of my investigations I will now endeavour to convey, with as much brevity as is
consistent with clearness. It is, however, absolutely necessary, both for the sake of brevity and of clearness, that
I should premise some definitions and some observations that will at once both explain and vindicate the system
of analysis I rely on, though the full exposition of it must be reserved for another occasion.

In the first place it must be stated that those requirements for architectural harmony which concern
mode of construction, arrangements, and peculiarity of style are to be understood as taken here for granted as
the examination of the principles of these is another branch of the subject. It must be further understood that it
is not pretended that any system of proportion can supersede or supply taste and imagination : the beauty of the
Temple was a conception of the inventive mind; it was afterwards, in the effort to determine and define the
conditions of this beautiful image, that systematic proportion came to aid the artist, in heightening refinements,
and in overcoming the difficulties of realisation.

It has appeared, then, by abundant proof, which the present paper is intended to set forth or still further to
confirm, that the Greek architects attached great value to simple ratios of low natural numbers for regulating the
proportions of parts and divisions of their structures relatively to each other.

The grandeur and grace of many mediaeval structures largely depend upon simplicity of proportion ; but it
may be doubted whether any other architects than the Greek, ever set the full and true value on the principle,
not merely as convenient aid to design, but as essential to expression ;—certainly none others ever applied it so
consistently, so logically, so ingeniously, or with such admirable effect.

I find that the architectural quantities that are made proportionate are estimated by the Greeks chiefly in
two ways, and it will be convenient to refer to such comparisons as,—