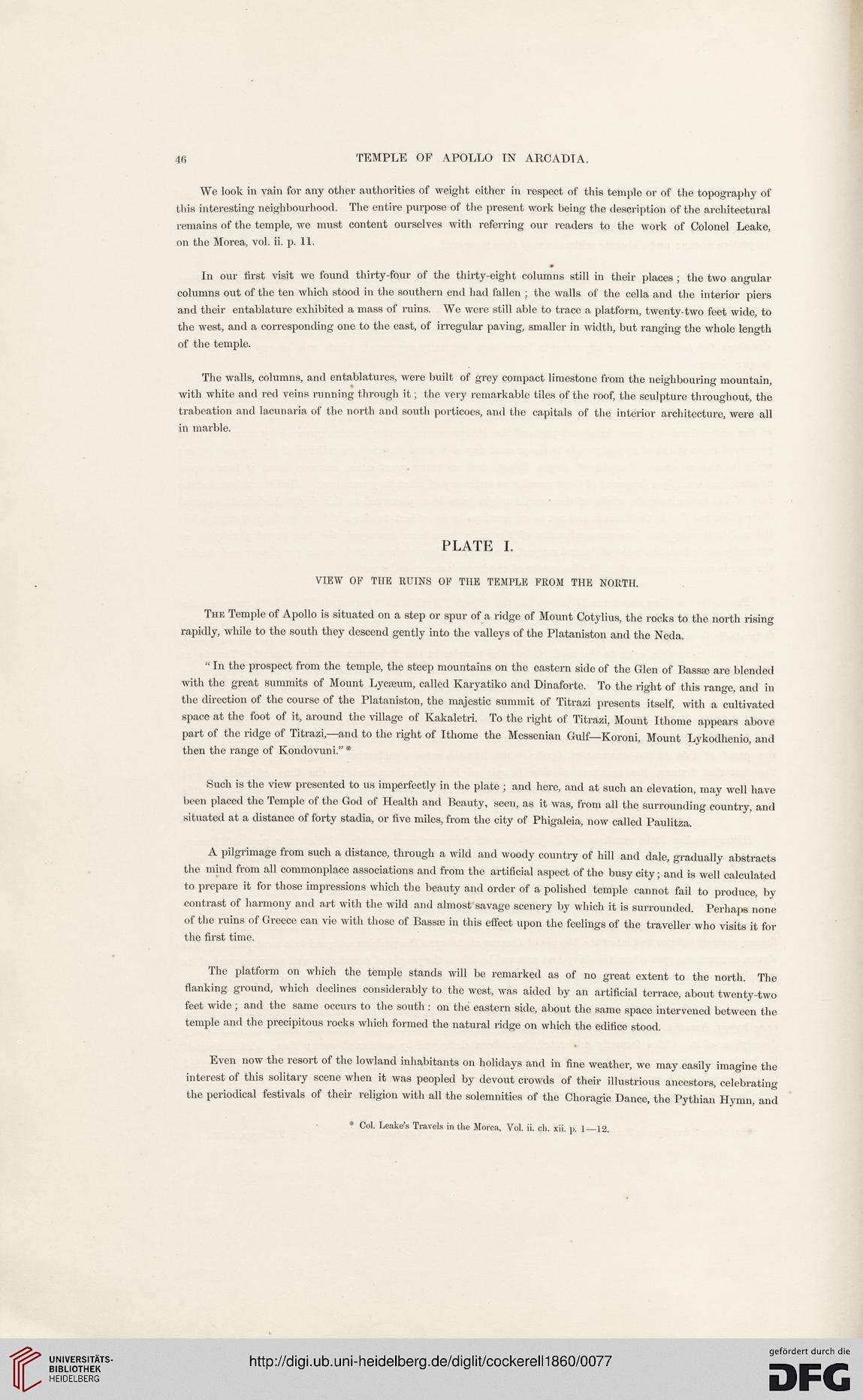 TEMPLE OF APOLLO IN ARCADIA,

We look in vain for any other authorities of weight either in respect of this temple or of the topography of
this interesting neighbourhood. The entire purpose of the present work being the description of the architectural
remains of the temple, we must content ourselves with referring our readers to the work of Colonel Leake,
on the Morea, vol. ii. p. 11.

In our first visit we found thirty-four of the thirty-eight columns still in their places ; the two angular
columns out of the ten which stood in the southern end had fallen ; the walls of the cella and the interior piers
and their entablature exhibited a mass of ruins. We were still able to trace a platform, twenty-two feet wide, to
the west, and a corresponding one to the east, of irregular paving, smaller in width, but ranging the whole length
of the temple.

The walls, columns, and entablatures, were built of grey compact limestone from the neighbouring mountain,
with white and red veins running through it; the very remarkable tiles of the roof, the sculpture throughout, the
trabeation and lacunaria of the north and south politicoes, and the capitals of the interior architecture, were all
in marble.

VIEW OP THE RUINS OP THE TEMPLE FROM THE NORTH.

The Temple of Apollo is situated on a step or spur of a ridge of Mount Cotylius, the rocks to the north rising
rapidly, while to the south they descend gently into the valleys of the Plataniston and the Neda.

" In the prospect from the temple, the steep mountains on the eastern side of the Glen of Bassae are blended
with the great summits of Mount Lycseum, called Karyatiko and Dinaforte. To the right of this range, and in
the direction of the course of the Plataniston, the majestic summit of Titrazi presents itself, with a cultivated
space at the foot of it, around the village of Kakaletri. To the right of Titrazi, Mount Ithome appears above
part of the ridge of Titrazi,—and to the right of Ithome the Messenian Gulf—Koroni, Mount Lykodhenio, and
then the range of Kondovuni." *

Such is the view presented to us imperfectly in the plate ; and here, and at such an elevation, may well have
been placed the Temple of the God of Health and Beauty, seen, as it was, from all the surrounding country, and
situated at a distance of forty stadia, or five miles, from the city of Phigaleia, now called Paulitza.

A pilgrimage from such a distance, through a wild and woody country of hill and dale, gradually abstracts
the mind from all commonplace associations and from the artificial aspect of the busy city; and is well calculated
to prepare it for those impressions which the beauty and order of a polished temple cannot fail to produce, by
contrast of harmony and art with the wild and almost savage scenery by which it is surrounded. Perhaps none
of the ruins of Greece can vie with those of Bassse in this effect upon the feelings of the traveller who visits it for
the first time.

The platform on which the temple stands will be remarked as of no great extent to the north. The
flanking ground, which declines considerably to the west, was aided by an artificial terrace, about twenty-two
feet wide ; and the same occurs to the south : on the eastern side, about the same space intervened between the
temple and the precipitous rocks which formed the natural ridge on which the edifice stood.

Even now the resort of the lowland inhabitants on holidays and in fine weather, we may easily imagine the
interest of this solitary scene when it was peopled by devout crowds of their illustrious ancestors, celebrating
the periodical festivals of their religion with all the solemnities of the Choragic Dance, the Pythian Hymn, and