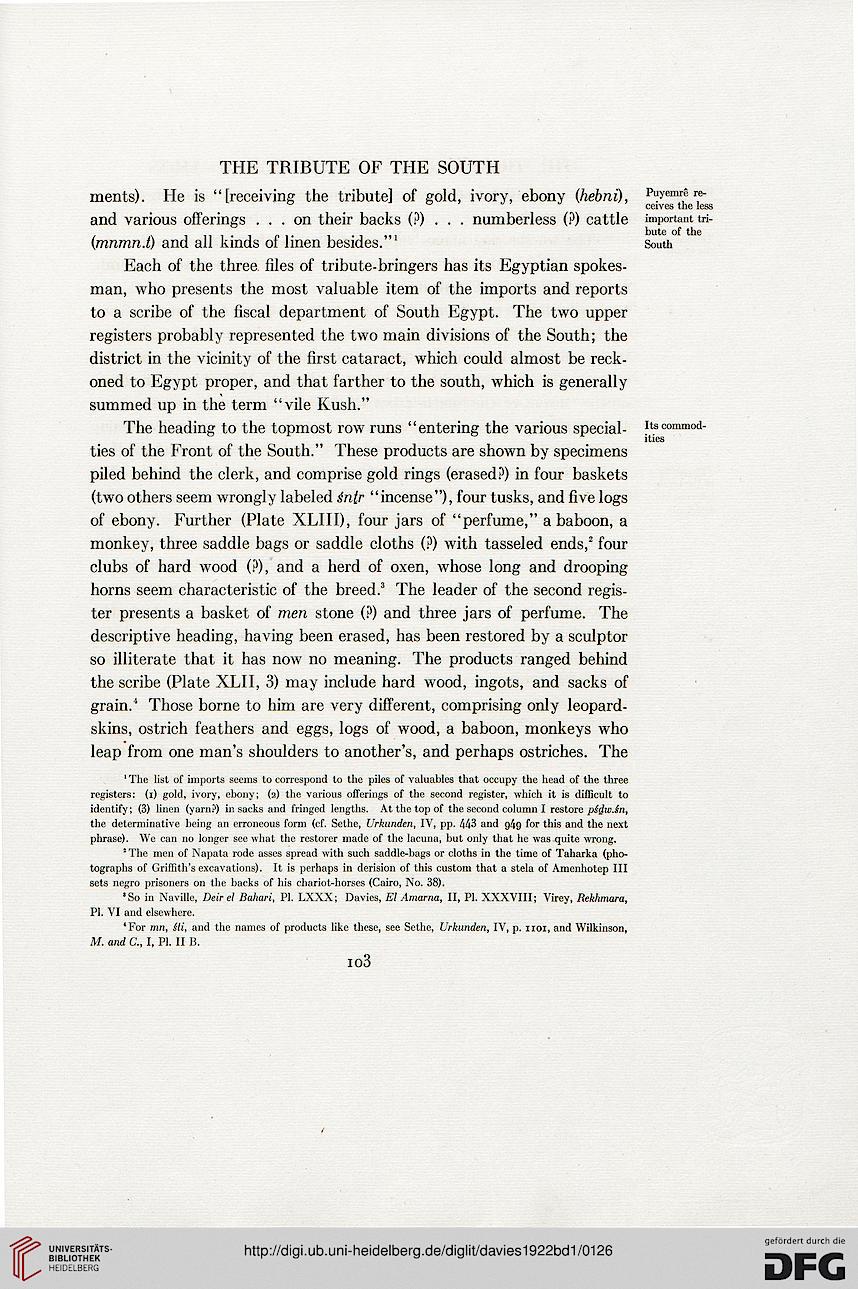 Each of the three files of tribute-bringers has its Egyptian spokes-
man, who presents the most valuable item of the imports and reports
to a scribe of the fiscal department of South Egypt. The two upper
registers probably represented the two main divisions of the South; the
district in the vicinity of the first cataract, which could almost be reck-
oned to Egypt proper, and that farther to the south, which is generally
summed up in the term "vile Kush."

The heading to the topmost row runs "entering the various special-
ties of the Front of the South." These products are shown by specimens
piled behind the clerk, and comprise gold rings (erased?) in four baskets
(two others seem wrongly labeled §ntr "incense"), four tusks, and five logs
of ebony. Further (Plate XLIII), four jars of "perfume," a baboon, a
monkey, three saddle bags or saddle cloths (?) with tasseled ends,2 four
clubs of hard wood (?), and a herd of oxen, whose long and drooping
horns seem characteristic of the breed.3 The leader of the second regis-
ter presents a basket of men stone (?) and three jars of perfume. The
descriptive heading, having been erased, has been restored by a sculptor
so illiterate that it has now no meaning. The products ranged behind
the scribe (Plate XLII, 3) may include hard wood, ingots, and sacks of
grain.4 Those borne to him are very different, comprising only leopard-
skins, ostrich feathers and eggs, logs of wood, a baboon, monkeys who
leap from one man's shoulders to another's, and perhaps ostriches. The

1 The list of imports seems to correspond to the piles of valuables that occupy the head of the three
registers: (i) gold, ivory, ebony; (2) the various offerings of the second register, which it is difficult to
identify; (3) linen (yarn?) in sacks and fringed lengths. At the top of the second column I restore psdwJn,
the determinative being an erroneous form (cf. Sethe, Urkunden, IV, pp. 443 and 949 for this and the next
phrase). We can no longer see what the restorer made of the lacuna, but only that he was quite wrong.

2 The men of Napata rode asses spread with such saddle-bags or cloths in the time of Taharka (pho-
tographs of Griffith's excavations). It is perhaps in derision of this custom that a stela of Amenhotep III
sets negro prisoners on the backs of his chariot-horses (Cairo, No. 38).

Puyemre re-
ceives the less
important tri-
bute of the
South