Society of Dilettanti [Editor]
The unedited antiquities of Attica: comprising the architectural remains of Eleusis, Rhamnus, Sunium, and Thoricus — London, 1833 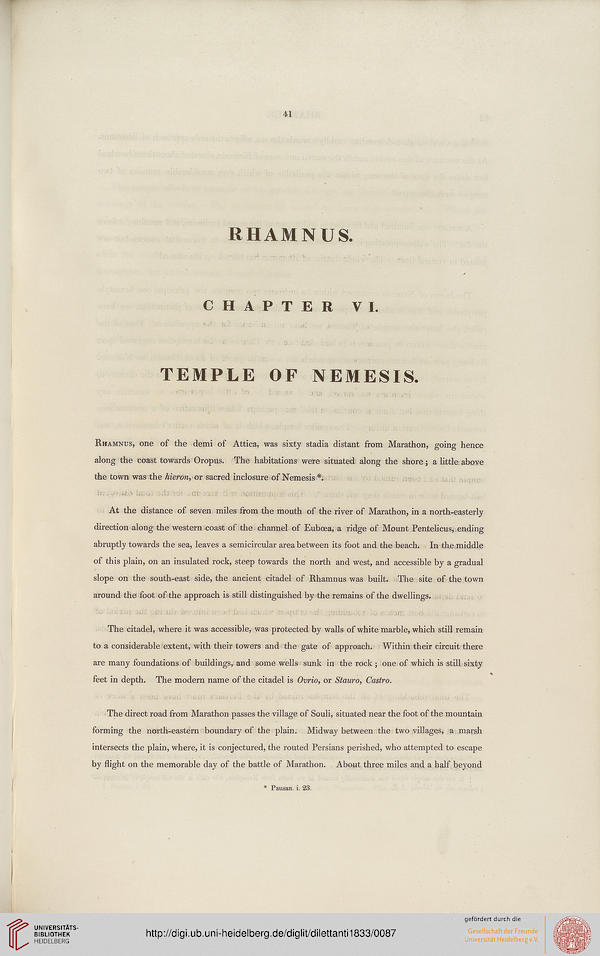 Rhamnus, one of the demi of Attica, was sixty stadia distant from Marathon, going hence
along the coast towards Oropus. The habitations were situated along the shore; a little above
the town was the hieron, or sacred inclosure of Nemesis •**

At the distance of seven miles from the mouth of the river of Marathon, in a north-easterly
direction along the western coast of the channel of Eubcea, a ridge of Mount Pentelicus, ending
abruptly towards the sea, leaves a semicircular area between its foot and the beach. In the middle
of this plain, on an insulated rock, steep towards the north and west, and accessible by a gradual
slope on the south-east side, the ancient citadel of Rhamnus was built. The site of the town
around the foot of the approach is still distinguished by the remains of the dwellings.

The citadel, where it was accessible, was protected by walls of white marble, which still remain
to a considerable extent, with their towers and the gate of approach. Within their circuit there
are many foundations of buildings, and some wells sunk in the rock ; one of which is still sixty
feet in depth. The modern name of the citadel is Ovrio, or Stauro, Castro.

The direct road from Marathon passes the village of Souli, situated near the foot of the mountain
forming the north-eastern boundary of the plain. Midway between the two villages, a marsh
intersects the plain, where, it is conjectured, the routed Persians perished, who attempted to escape
by flight on the memorable day of the battle of Marathon. About three miles and a half beyond