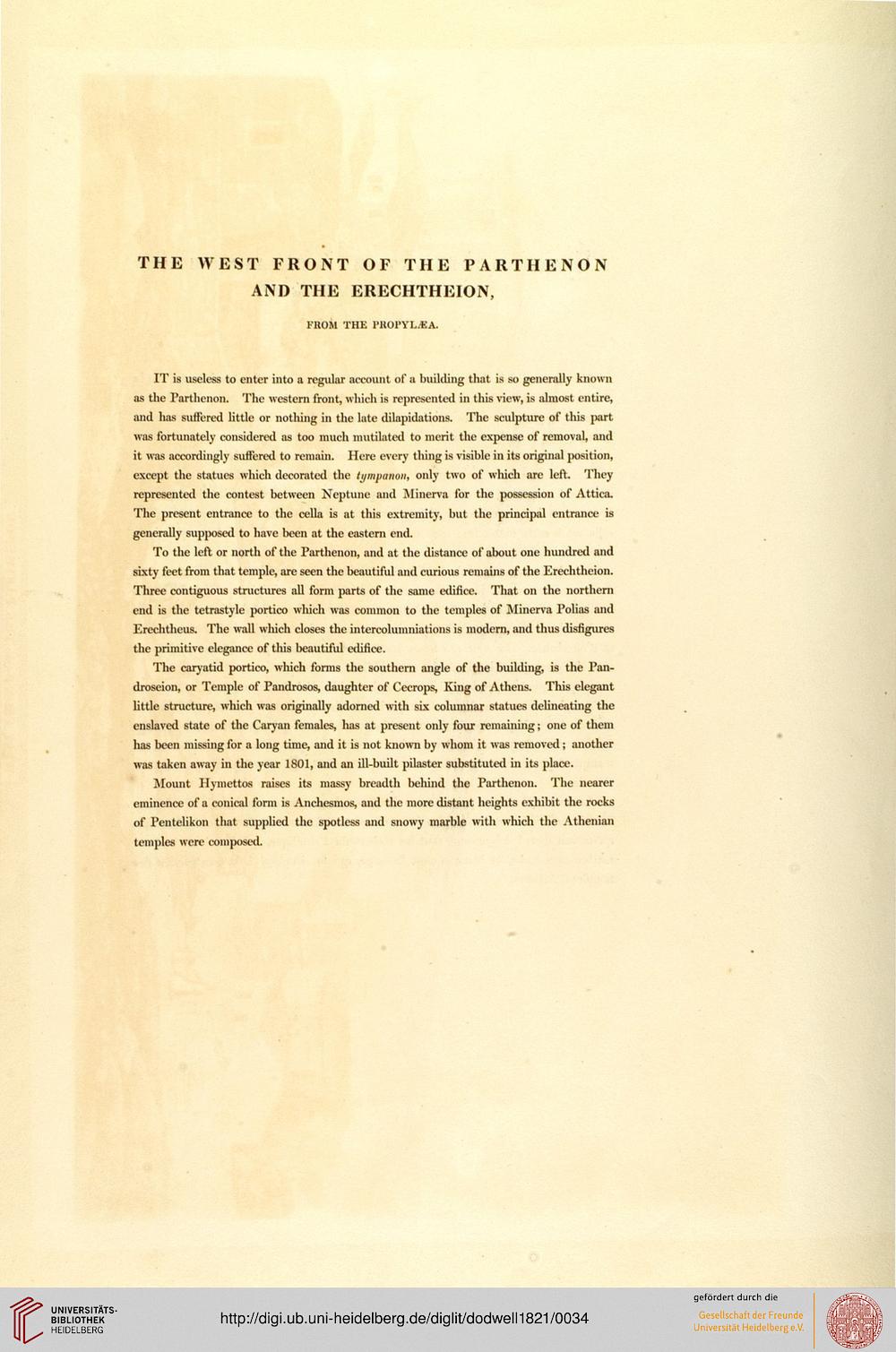 Information about OCR text
THE WEST FRONT OF THE PARTHENON
AND THE ERECHTHEION,

IT is useless to enter into a regular account of ;t building that is so generally known
as the Parthenon. The western front, which is represented in this view, is almost entire,
and has suffered little or nothing in the late dilapidations. The sculpture of this part
was fortunately considered as too much mutilated to merit the expense of removal, and
it was accordingly suffered to remain. Here every thing is visible in its original position,
except the statues which decorated the tympanou, only two of which are left. They
represented the contest between Neptune and Minerva for the possession of Attica.
The present entrance to the cella is at this extremity, but the principal entrance is
generally supposed to have been at the eastern end.

To the left or north of the Parthenon, and at the distance of about one hundred and
sixty feet from that temple, are seen the beautiful and curious remains of the Krechtheion.
Three contiguous structures all form parts of the same edifice. That on the northern
end is the tetrastyle portico which was common to the temples of Minerva Polios and
Ercchtheus. The wall which closes the intercolumniations is modem, and thus disfigures
the primitive elegance of tlus beautiful edifice.

The caryatid portico, which forms the southern angle of the building, is the Pan-
droscion, or Temple of Pandrosos, daughter of Cecrops, King of Athens. This elegant
little structure, which was originally adorned with six columnar statues delineating the
enslaved state of the Caryan females, has at present only four remaining; one of them
has been missing for a long time, and it is not known by whom it was removed; another
was taken away in the year 1801, and an ill-built pilaster substituted in its place.

Mount Hymettos raises its massy breadth behind the Parthenon. The nearer
eminence of a conical form is Anchesmos, and the BOOH distant heights exhibit the rocks
of Pcntelikon that supplied the spotless and snowy marble with which the Athenian
temples were composed.