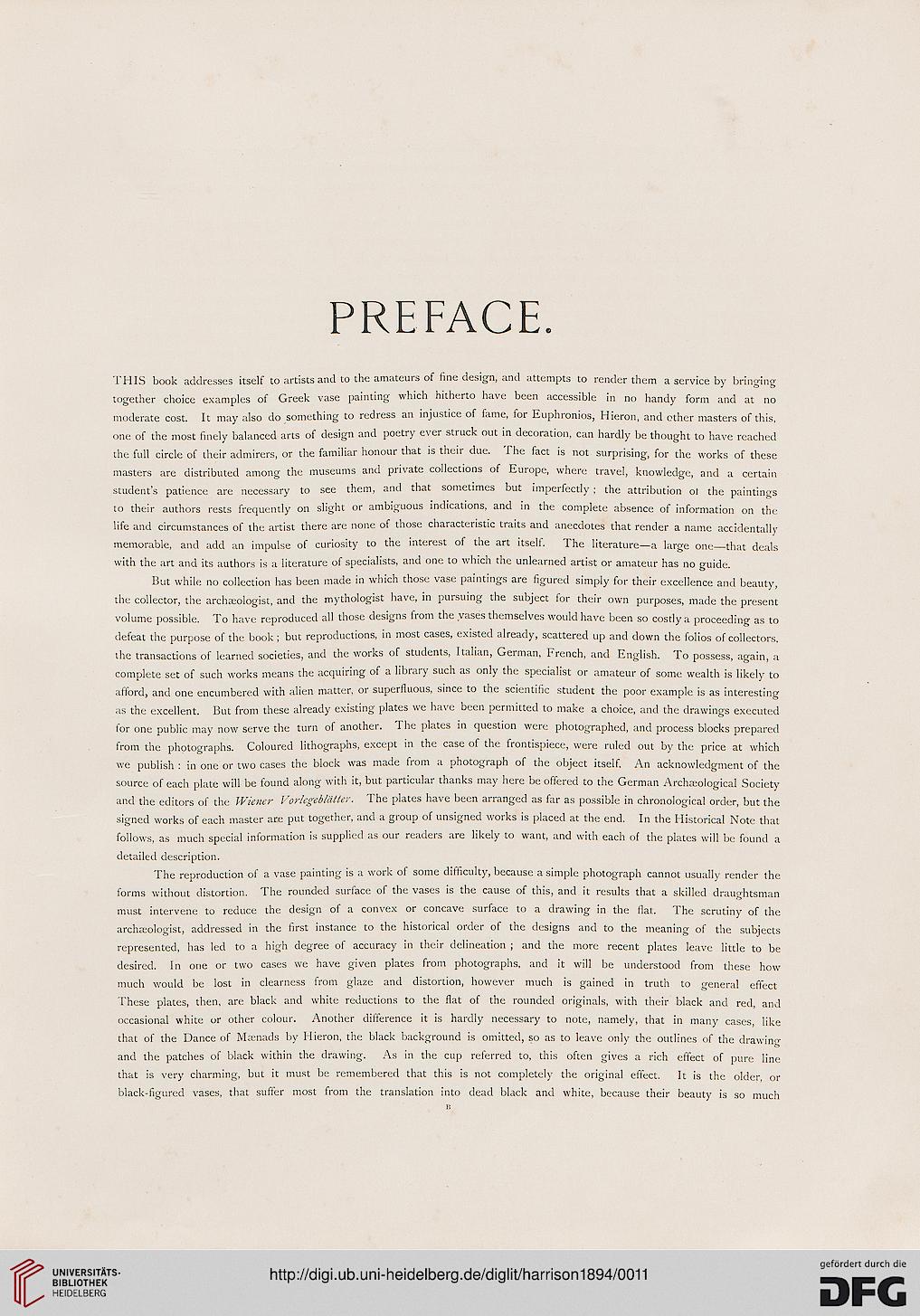 THIS book addresses itself to artists and to the amateurs of fine design, and attempts to render them a service by bringing
together choice examples of Greek vase painting which hitherto have been accessible in no handy form and at no
moderate cost. It may also do something to redress an injustice of fame, for Euphronios, Hieron, and ether masters of this,
one of the most finely balanced arts of design and poetry ever struck out in decoration, can hardly be thought to have reached
the full circle of their admirers, or the familiar honour that is their due. The fact is not surprising, for the works of these
masters are distributed among the museums and private collections of Europe, where travel, knowledge, and a certain
student's patience are necessary to see them, and that sometimes but imperfectly ; the attribution ot the paintings
to their authors rests frequently on slight or ambiguous indications, and in the complete absence of information on the
life and circumstances of the artist there are none of those characteristic traits and anecdotes that render a name accidentally
memorable, and add an impulse of curiosity to the interest of the art itself. The literature—a large one—that deals
with the art and its authors is a literature of specialists, and one to which the unlearned artist or amateur has no guide.

But while no collection has been made in which those vase paintings are figured simply for their excellence and beauty,
the collector, the archaeologist, and the mycologist have, in pursuing the subject for their own purposes, made the present
volume possible. To have reproduced all those designs from the vases themselves would have been so costly a proceeding as to
defeat the purpose of the book ; but reproductions, in most cases, existed already, scattered up and down the folios of collectors,
the transactions of learned societies, and the works of students, Italian, German, French, and English. To possess, again, a
complete set of such works means the acquiring of a library such as only the specialist or amateur of some wealth is likely to
afford, and one encumbered with alien matter, or superfluous, since to the scientific student the poor example is as interesting
as the excellent. But from these already existing plates we have been permitted to make a choice, and the drawings executed
for one public may now serve the turn of another. The plates in question were photographed, and process blocks prepared
from the photographs. Coloured lithographs, except in the case of the frontispiece, were ruled out by the price at which
we publish : in one or two cases the block was made from a photograph of the object itself. An acknowledgment of the
source of each plate will be found along with it, but particular thanks may here be offered to the German Archaeological Society
and the editors of the Wiener Vorlegeblatter. The plates have been arranged as far as possible in chronological order, but the
signed works of each master are put together, and a group of unsigned works is placed at the end. In the Historical Note that
follows, as much special information is supplied as our readers are likely to want, and with each of the plates will be found a
detailed description.

The reproduction of a vase painting is a work of some difficulty, because a simple photograph cannot usually render the
forms without distortion. The rounded surface of the vases is the cause of this, and it results that a skilled draughtsman
must intervene to reduce the design of a convex or concave surface to a drawing in the flat. The scrutiny of the
archaeologist, addressed in the first instance to the historical order of the designs and to the meaning of the subjects
represented, has led to a high degree of accuracy in their delineation ; and the more recent plates leave little to be
desired. In one or two cases we have given plates from photographs, and it will be understood from these how
much would be lost in clearness from glaze and distortion, however much is gained in truth to general effect
These plates, then, are black and white reductions to the flat of the rounded originals, with their black and red, and
occasional white or other colour. Another difference it is hardly necessary to note, namely, that in many cases, like
that of the Dance of Maenads by Hieron, the black background is omitted, so as to leave only the outlines of the drawing
and the patches of black within the drawing. As in the cup referred to, this often gives a rich effect of pure line
that is very charming, but it must be remembered that this is not completely the original effect. It is the older, or
black-figured vases, that suffer most from the translation into dead black and white, because their beauty is so much