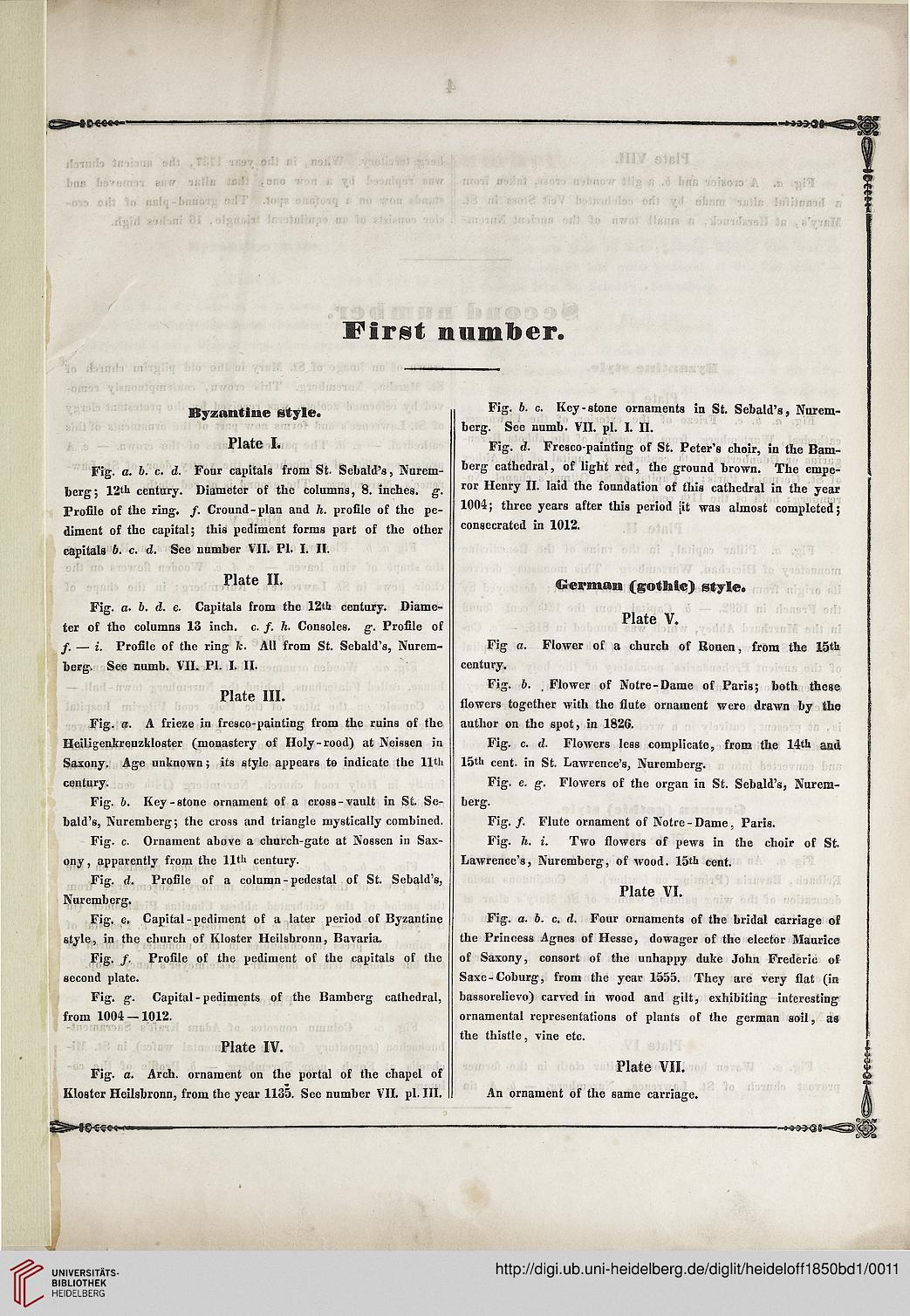 Byzantine style.
Plate 1.
Fig. a. A. c. d. Four capitals from Si. Sebald's, Nurem-
berg; 12th century. Diameter of the columns, 8. inches, g.
Profile of the ring. y. Cround-plan and A. proEle of the pe-
diment of the capital; this pediment forms part of the other
capitals 6. c. d. See number VII. PI. I. H.
Plate II.
Fig. a. &. d. e. Capitals from the 12th century. Diame-
ter of the columns 13 inch. c. y. A. Consoles, g. ProEle of
y. — L ProEle of the ring A. AH from St. Sebald's, Nurem-
berg See numb. VII. Pi. 1. II-
Plate III.
Fig. a. A frieze in fresco-painting from the ruins of the
Heiligenkreuzkloster (monastery of Holy-rood) at Neissen in
Saxony. Age unknown; its style appears to indicate the 11th
century.
Fig. &. Key-stone ornament of a cross-vault in St. Se-
bald's, Nuremberg; the cross and triangle mystically combined.
Fig. c. Ornament above a church-gate at Nossen in Sax-
ony, apparently from the 11th century.
Fig. d. ProEle of a column - pedestal of St. Sebald's,
Nuremberg.
Fig. e. Capital-pediment of a later period of Byzantine
style, in the church of Kloster Heilsbronn, Bavaria.
Fig. y. ProEle of the pediment of the capitals of the
second plate.
Fig. g. Capital-pediments of the Bamberg cathedral,
from 1004 —1012.
Plate IV.

German (gothic) style.
Plate V.
Fig a. Flower of a church of Rouen, from the 15th
century.
Fig. A. Flower of Notre-Dame of Paris; both these
Eowers together with the Eute ornament were drawn by the
author on the spot, in 1826.
Fig. c. d. Flowers less complicate, from the 14th and
15th cent, in St. Lawrence's, Nuremberg.
Fig- e. g. Flowers of the organ in St. Sebald's, Nurem-
berg.
Fig. y. Flute ornament of Notre-Dame, Paris.
Fig. A. L Two Eowers of pews in the choir of St.
Lawrence's, Nuremberg, of wood. 15th cent.
Plate VI.
Fig. a. A. c. d. Four ornaments of the bridal carriage of
the Princess Agnes of Hesse, dowager of the elector Manrice
of Saxony, consort of the unhappy duke John Frederic of
Saxe-Coburg, from the year 1555. They are very Eat (in
bassorelievo) carved in wood and gilt, exhibiting interesting
ornamental representations of plants of the german soil, as
the thistle, vine etc.

Fig. a. Arch, ornament on the portal of the chapel of
Kloster Heilsbronn, from the year 1135. See number VII. pi. HI.

Plate VII.
An ornament of the same carriage.