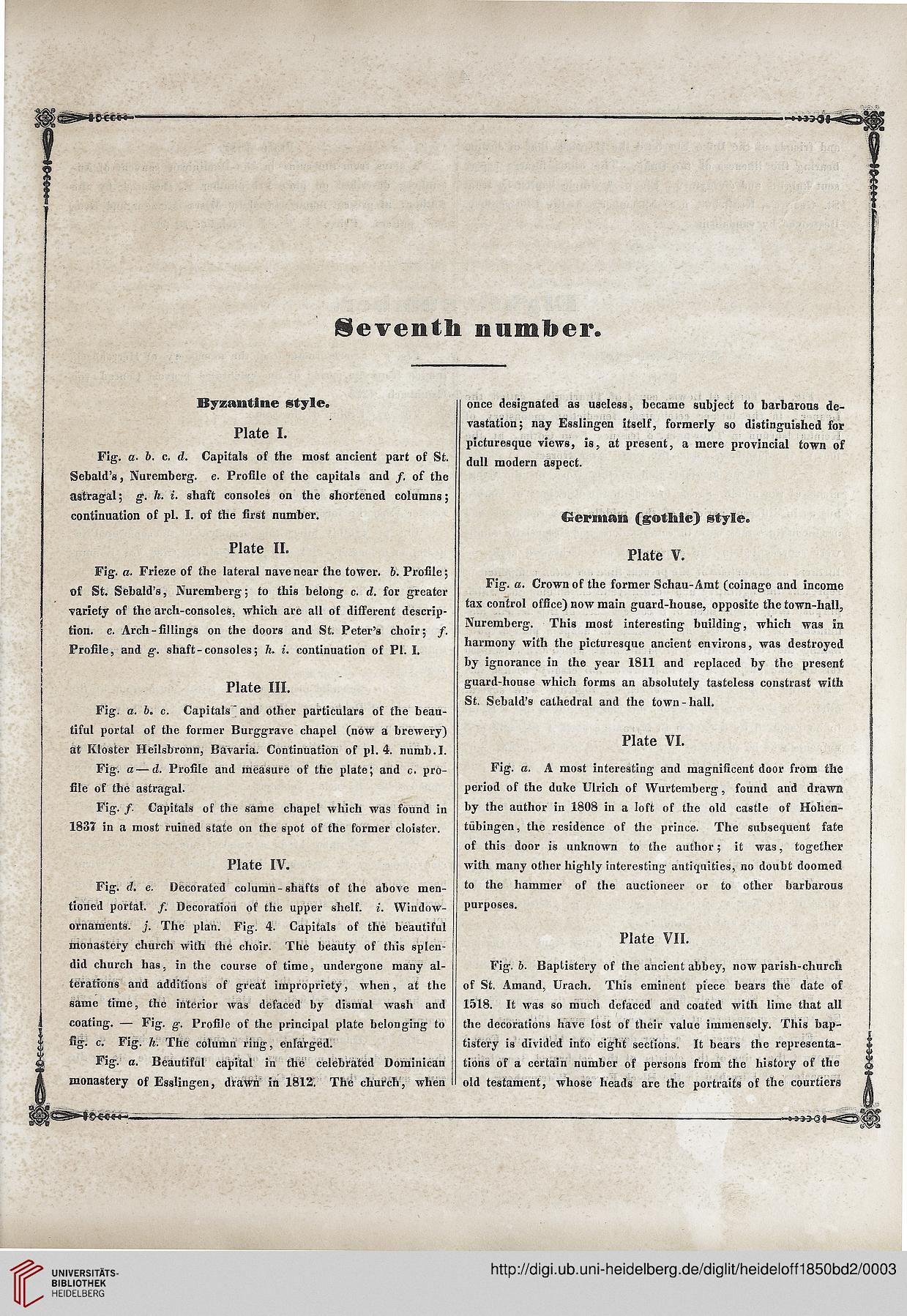 Byzantine styRe.
Platel.
F!g. a. &. c. & Capitals of the most ancient part of St.
Sebald's, Nuremberg. e. FroRIe of the capitals and /. of the
astragal; g. A. t. shaft consoles on the shortened columns;
continuation of pl. I of the first number.
Plate II.
Fig. o. Frieze of the lateral nave near the tower. &. ProRIe;
of St. Sebald's, Nuremberg; to this belong c. d. for greater
variety of the arch-consoles, which are all of diHerent descrip-
tion. e. Arch-RIIings on the doors and St. Peter's choir; /.
ProCIe, and g. shaft-consoles; A. continuation of PI. !.
Ptate III.
Fig. a. &. c. Capitals and other particulars of the beau-
tiful portal of the former Burggrave chapel (now a brewery)
at Kloster Heilsbronn, Bavaria. Continuation of pl. 4. numb.I.
Fig. cc—d. Prohle and measure of the plate; and c. pro-
81e of the astragal.
Fig. y. Capitals of the same chapel which was found in
1887 in a most ruined state on the spot of the former cloister.
Plate IV.
Fig. d. e. Decorated column-shafts of the above men-
tioned portal. /. Decoration of the upper shelf. :. Window-
ornaments. j. The plan. Fig. 4. Capitals of the beautiful
monastery church with the choir. The beauty of this splen
did church has, in the course of time, undergone many al-
terations and additions of great impropriety, when, at the
same time, the interior was defaced by dismal wash and
coating. — Fig. g. Prohle of the principal plate belonging to
Hg. c. Fig. A. The column ring, enlarged.
Fig. a. Beautiful capital in the celebrated Dominican
monastery of Esslingen, drawn in 1812. The church, when

once designated as useless, became subject to barbarous de-
vastation; nay Esslingen itself, formerly so distinguished for
picturesque views, is, at present, a mere provincial town of
dull modern aspect.
Clerrnan (gothlc) style.
Plate V.
Fig. a. Crownof the former Schau-Amt (coinage and income
tax control office) now main guard-house, opposite the town-hail,
Nuremberg. This most interesting building, which was in
harmony with the picturesque ancient environs, was destroyed
by ignorance in the year 1811 and replaced by the present
guard-house which forms an absolutely tasteless constrast with
St. Sebald's cathedral and the town-hall.
Plate VI.
Fig. c. A most interesting and magnificent door from the
period of the duke Ulrich of Wurtemberg, found and drawn
by the author in 1808 in a Ioft of the old castle of Hohen-
tubingen, the residence of the prince. The subsequent fate
of this door is unknown to the author; it was, together
with many otherhighlyinteresting antiquities, no doubt doomed
to the hammer of the auctioneer or to other barbarous
purposes.
Plate VII.
Fig. &. Baptistery of the ancient abbey, now parish-church
of St. Amand, Urach. This eminent piece bears the date of
1518. It was so much defaced and coated with lime that all
the decorations have lost of their value immensely. This bap-
tistery is divided into eight sections. It bears the representa-
tions of a certain number of persons from the history of the
old testament, whose heads are the portraits of the courtiers