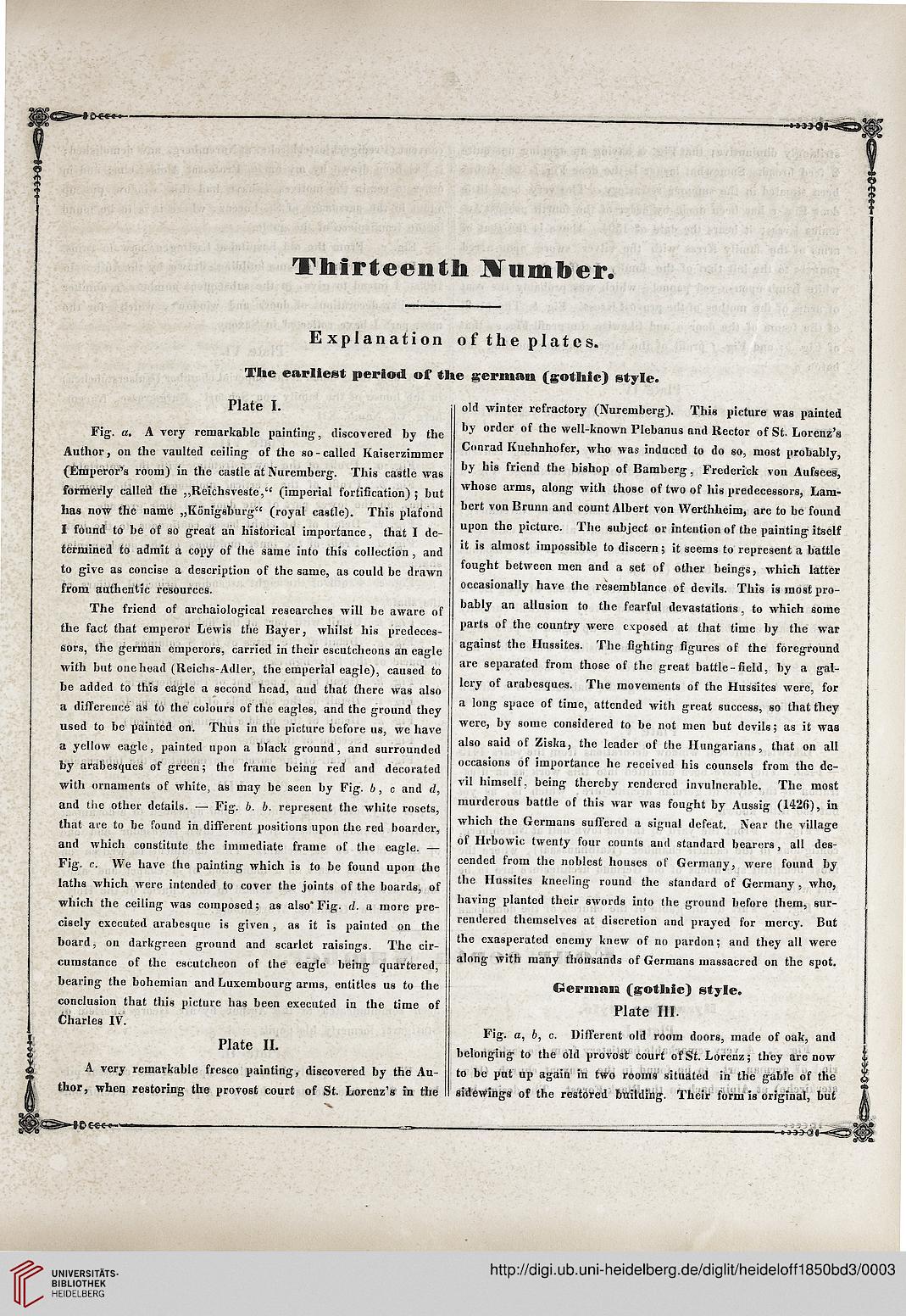 
Plate!.
Fig. a. A very remarkable painting, discovered by the
Author, on the vauited ceiling of the so-catted Kaiserzimmer
(Emperor's room) in the castte at Nuremberg. This castte was
formerly catted the „Reichsveste," (imperial fortihcation); but
has now the name „Kon!gsburg" (royat castle). This plafond
i found to be of so great an historical importance, that I de-
termined to admit a copy of the same into this cottection, and
to give as concise a description of the same, as coutd be drawn
from authentic resources.
The friend of archaiotogical researches wilt be aware of
the fact that emperor Lewis the Bayer, whilst his predeces-
sors, the german emperors, carried in their escutcheons an eagle
with but one head (Reichs-Adler, the emperial eagle), caused to
be added to this eagle a second head, and that there was also
a difference as to the colours of the eagles, and the ground they
used to be painted on. Thus in the picture before us, we have
a yellow eagle, painted upon a black ground, and surrounded
by arabesques of green; the frame being red and decorated
with ornaments of white, as may be seen by Fig. 5, c and d,
and the other details. — Fig. &. &. represent the white rosets,
that are to be found in different positions upon the red hoarder,
and which constitute the immediate frame of the eagle. —
Fig. c. We have the painting which is to be found upon the
laths which were intended to cover the joints of the boards, of
which the ceiling was composed; as also* Fig. d. a more pre-
cisely executed arabesque is given , as it is painted on the
board, on darkgreen ground and scarlet raisings. The cir-
cumstance of the escutcheon of the eagle being quartered,
bearing the bohemian and Luxembourg arms, entitles us to the
conclusion that this picture has been executed in the time of
Charles IV.
Plate II.
A very remarkable fresco painting, discovered by the Au-
thor, when restoring the provost court of St. Lorenz's in the


old winter refractory (Nuremberg). This picture was painted
by order of the well-known Plebanus and Rector of St. Lorenz's
Conrad Kuehnhofer, who was induced to do so, most probably,
by his friend the bishop of Bamberg, Frederick von Aufsees,
whose arms, along with those of two of his predecessors, Lam-
bert von Brunn and count Albert von Werthheim, are to be found
upon the picture. The subject or intention of the painting itself
it is almost impossible to discern; it seems to represent a battle
fought between men and a set of other beings, which latter
occasionally have the resemblance of devils. This is most pro-
bably an allusion to the fearful devastations, to which some
parts of the country were exposed at that time by the war
against the Hussites. The lighting figures of the foreground
are separated from those of the great battle-held, by a gal-
lery of arabesques. The movements of the Hussites were, for
a long space of time, attended with great success, so that they
were, by some considered to be not men but devils; as it was
also said of Ziska, the leader of the Hungarians, that on all
occasions of importance he received his counsels from the de-
vil himself, being thereby rendered invulnerable. The most
murderous battle of this war was fought by Aussig (1426), in
which the Germans suffered a signal defeat. Near the village
of Hrbowic twenty four counts and standard bearers, all des-
cended from the noblest houses of Germany, were found by
the Hussites kneeling round the standard of Germany, who,
having planted their swords into the ground before them, sur-
rendered themselves at discretion and prayed for mercy. But
the exasperated enemy knew of no pardon; and they all were
along with many thousands of Germans massacred on the spot.
t-erntaM (gothic) styie.
Plate III.
Fig. a, &, c. Different old room doors, made of oak, and
belonging to the old provost court of St. Lorenz; they are now
to be put up again in two rooms situated in the gable of the
sidewings of the restored building. Their form is original, but