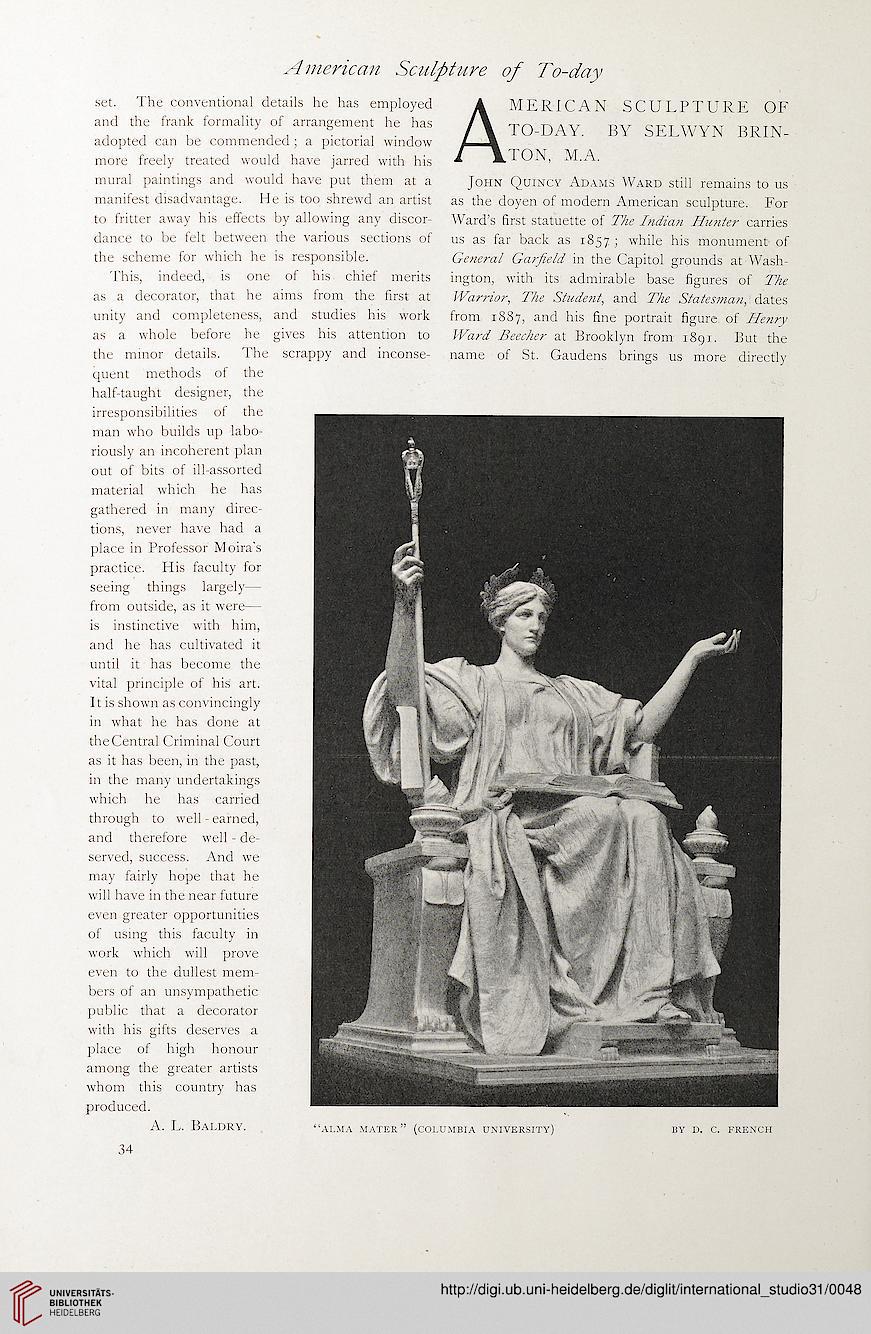 set. The conventional details he has employed
and the frank formality of arrangement he has
adopted can be commended; a pictorial window
more freely treated would have jarred with his
mural paintings and would have put them at a
manifest disadvantage. He is too shrewd an artist
to fritter away his effects by allowing any discor-
dance to be felt between the various sections of
the scheme for which he is responsible.
This, indeed, is one of his chief merits
as a decorator, that he aims from the first at
unity and completeness, and studies his work
as a whole before he gives his attention to
the minor details. The scrappy and inconse-
quent methods of the
half-taught designer, the
irresponsibilities of the
man who builds up labo-
riously an incoherent plan
out of bits of ill-assorted
material which he has
gathered in many direc-
tions, never have had a
place in Professor Moira's
practice. His faculty for
seeing things largely—
from outside, as it were—
is instinctive with him,
and he has cultivated it
until it has become the
vital principle of his art.
It is shown as convincingly
in what he has done at
the Central Criminal Court
as it has been, in the past,
in the many undertakings
which he has carried
through to well - earned,
and therefore well - de-
served, success. And we
may fairly hope that he
will have in the near future
even greater opportunities
of using this faculty in
work which will prove
even to the dullest mem-
bers of an unsympathetic
public that a decorator
with his gifts deserves a
place of high honour
among the greater artists
whom this country has
produced.
A. L. Baldry. “alma mater” (Columbia university) by d. c. french

American sculpture of
TO-DAY. BY SELWYN BRIN-
TON, M.A.
John Quincy Adams Ward still remains to us
as the doyen of modern American sculpture. For
Ward’s first statuette of The Indian Hunter carries
us as far back as 1857 ; while his monument of
General Garfield in the Capitol grounds at Wash-
ington, with its admirable base figures of The
Warrior, The Student, and The Statesman, dates
from 1887, and his fine portrait figure of Henry
Ward Beecher at Brooklyn from 1891. But the
name of St. Gaudens brings us more directly