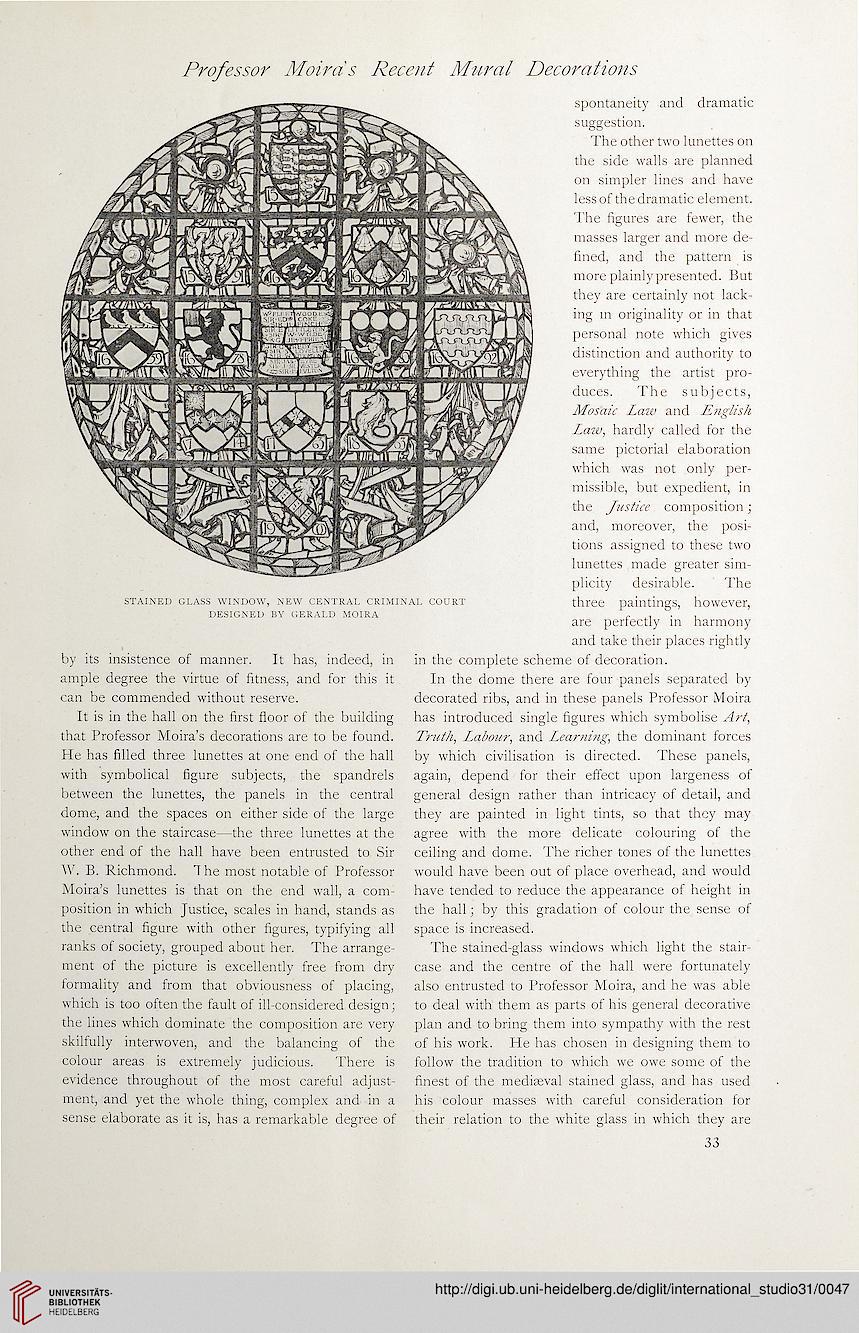 
by its insistence of manner. It has, indeed, in
ample degree the virtue of fitness, and for this it
can be commended without reserve.
It is in the hall on the first floor of the building
that Professor Moira’s decorations are to be found.
He has filled three lunettes at one end of the hall
with symbolical figure subjects, the spandrels
between the lunettes, the panels in the central
dome, and the spaces on either side of the large
window on the staircase—the three lunettes at the
other end of the hall have been entrusted to Sir
W. B. Richmond. 1 he most notable of Professor
Moira’s lunettes is that on the end wall, a com-
position in which Justice, scales in hand, stands as
the central figure with other figures, typifying all
ranks of society, grouped about her. The arrange-
ment of the picture is excellently free from dry
formality and from that obviousness of placing,
which is too often the fault of ill-considered design;
the lines which dominate the composition are very
skilfully interwoven, and the balancing of the
colour areas is extremely judicious. There is
evidence throughout of the most careful adjust-
ment, and yet the whole thing, complex and in a
sense elaborate as it is, has a remarkable degree of

spontaneity and dramatic
suggestion.
The other two lunettes on
the side walls are planned
on simpler lines and have
less of the dramatic element.
The figures are fewer, the
masses larger and more de-
fined, and the pattern is
more plainly presented. But
they are certainly not lack-
ing m originality or in that
personal note which gives
distinction and authority to
everything the artist pro-
duces. The subjects,
Mosaic Law and English
Law, hardly called for the
same pictorial elaboration
which was not only per-
missible, but expedient, in
the Justice composition;
and, moreover, the posi-
tions assigned to these two
lunettes made greater sim-
plicity desirable. The
three paintings, however,
are perfectly in harmony
and take their places rightly
in the complete scheme of decoration.
In the dome there are four panels separated by
decorated ribs, and in these panels Professor Moira
has introduced single figures which symbolise Art,
Truth, Labour, and Learning, the dominant forces
by which civilisation is directed. These panels,
again, depend for their effect upon largeness of
general design rather than intricacy of detail, and
they are painted in light tints, so that they may
agree with the more delicate colouring of the
ceiling and dome. The richer tones of the lunettes
would have been out of place overhead, and would
have tended to reduce the appearance of height in
the hall • by this gradation of colour the sense of
space is increased.
The stained-glass windows which light the stair-
case and the centre of the hall were fortunately
also entrusted to Professor Moira, and he was able
to deal with them as parts of his general decorative
plan and to bring them into sympathy with the rest
of his work. He has chosen in designing them to
follow the tradition to which we owe some of the
finest of the mediaeval stained glass, and has used
his colour masses with careful consideration for
their relation to the white glass in which they are