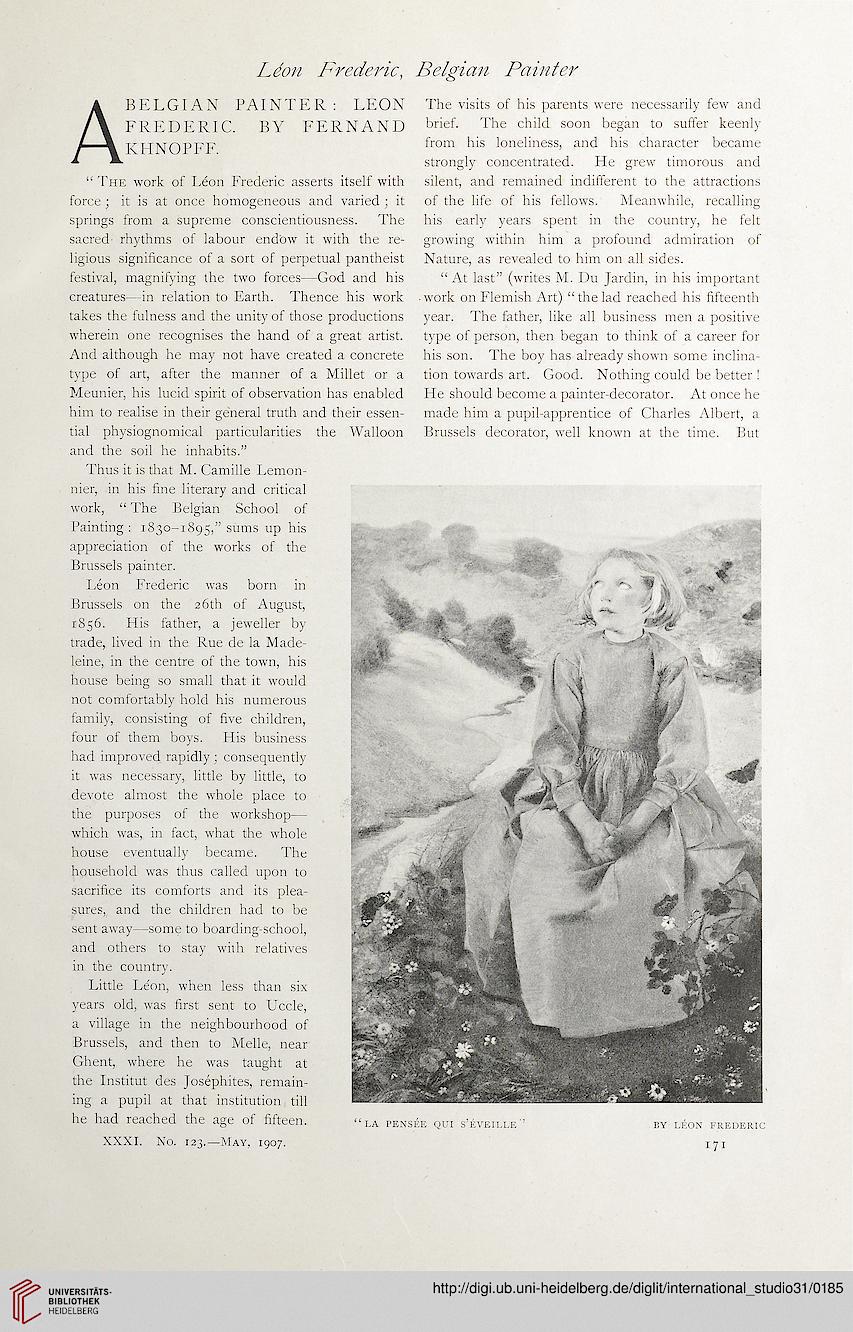 “The work of Leon Frederic asserts itself with
force ; it is at once homogeneous and varied ; it
springs from a supreme conscientiousness. The
sacred rhythms of labour endow it with the re-
ligious significance of a sort of perpetual pantheist
festival, magnifying the two forces—God and his
creatures—in relation to Earth. Thence his work
takes the fulness and the unity of those productions
wherein one recognises the hand of a great artist.
And although he may not have created a concrete
type of art, after the manner of a Millet or a
Meunier, his lucid spirit of observation has enabled
him to realise in their general truth and their essen-
tial physiognomical particularities the Walloon
and the soil he inhabits.”
Thus it is that M. Camille Lemon-
nier, in his fine literary and critical
work, “ The Belgian School of
Painting : 1830-1895,” sums up his
appreciation of the works of the
Brussels painter.
Leon Frederic was born in
Brussels on the 26th of August,
1856. His father, a jeweller by
trade, lived in the Rue de la Made-
leine, in the centre of the town, his
house being so small that it would
not comfortably hold his numerous
family, consisting of five children,
four of them boys. His business
had improved rapidly ; consequently
it was necessary, little by little, to
devote almost the whole place to
the purposes of the workshop—
which was, in fact, what the whole
house eventually became. The
household was thus called upon to
sacrifice its comforts and its plea-
sures, and the children had to be
sent away—some to boarding-school,
and others to stay with relatives
in the country.
Little Leon, when less than six
years old, was first sent to Uccle,
a village in the neighbourhood of
Brussels, and then to Melle, near
Ghent, where he was taught at
the Institut des Josephites, remain-
ing a pupil at that institution till
he had reached the age of fifteen.

The visits of his parents were necessarily few and
brief. The child soon began to suffer keenly
from his loneliness, and his character became
strongly concentrated. He grew timorous and
silent, and remained indifferent to the attractions
of the life of his fellows. Meanwhile, recalling
his early years spent in the country, he felt
growing within him a profound admiration of
Nature, as revealed to him on all sides.
“ At last” (writes M. Du Jardin, in his important
■ work on Flemish Art) “the lad reached his fifteenth
year. The father, like all business men a positive
type of person, then began to think of a career for
his son. The boy has already shown some inclina-
tion towards art. Good. Nothing could be better !
He should become a painter-decorator. At once he
made him a pupil-apprentice of Charles Albert, a
Brussels decorator, well known at the time. But