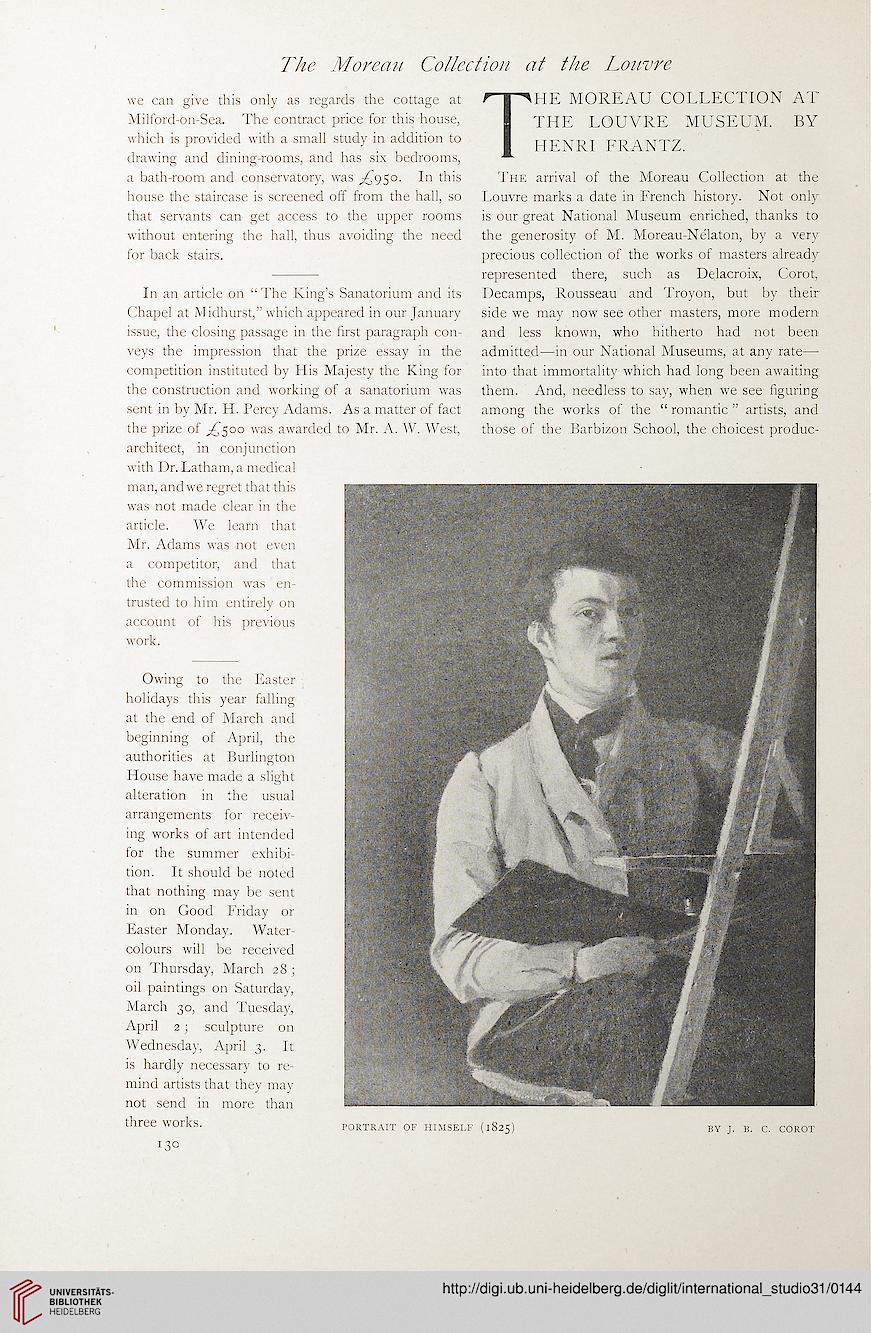 Information about OCR text
The Moreau Collection at the Louvre

we can give this only as regards the cottage at
Milford-on-Sea. The contract price for this house,
which is provided with a small study in addition to
drawing and dining-rooms, and has six bedrooms,
a bath-room and conservatory, was ^950. In this
house the staircase is screened off from the hall, so
that servants can get access to the upper rooms
without entering the hall, thus avoiding the need
for back stairs.

In an article on “ The King’s Sanatorium and its
Chapel at Midhurst,” which appeared in our January
issue, the closing passage in the first paragraph con-
veys the impression that the prize essay in the
competition instituted by His Majesty the King for
the construction and working of a sanatorium was
sent in by Mr. H. Percy Adams. As a matter of fact
the prize of T5°° was awarded to Mr. A. W. West,
architect, in conjunction
with Dr. Latham, a medical
man, andwe regret that this
was not made clear in the
article. We learn that
Mr. Adams was not even
a competitor, and that
the commission was en-
trusted to him entirely on
account of his previous
work.

Owing to the Easter
holidays this year falling
at the end of March and
beginning of April, the
authorities at Burlington
House have made a slight
alteration in the usual
arrangements for receiv-
ing works of art intended
for the summer exhibi-
tion. It should be noted
that nothing may be sent
in on Good Friday or
Easter Monday. Water-
colours will be received
on Thursday, March 28;
oil paintings on Saturday,
March 30, and Tuesday,
April 2; sculpture on
Wednesday, April 3. It
is hardly necessary to re-
mind artists that they may
not send in more than
three works.

THE MOREAU COLLECTION AT
THE LOUVRE MUSEUM. BY
HENRI FRANTZ.
The arrival of the Moreau Collection at the
Louvre marks a date in French history. Not only
is our great National Museum enriched, thanks to
the generosity of M. Moreau-Nelaton, by a very
precious collection of the works of masters already
represented there, such as Delacroix, Corot,
Decamps, Rousseau and Troyon, but by their
side we may now see other masters, more modern
and less known, who hitherto had not been
admitted—in our National Museums, at any rate—
into that immortality which had long been awaiting
them. And, needless to say, when we see figuring
among the works of the “ romantic ” artists, and
those of the Barbizon School, the choicest produc-