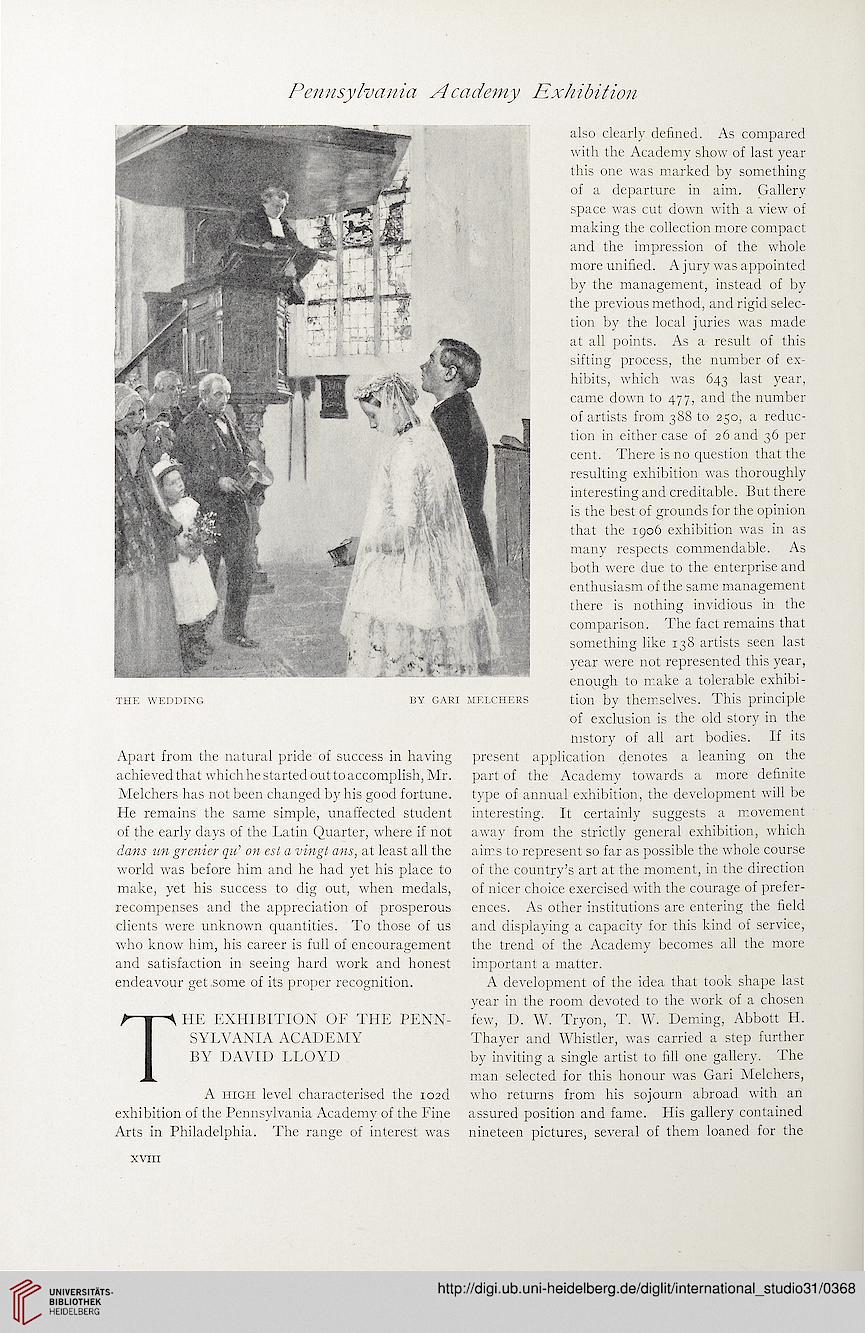 Apart from the natural pride of success in having
achieved that which he started out to accomplish, Mr.
Melchers has not been changed by his good fortune.
He remains the same simple, unaffected student
of the early days of the Latin Quarter, where if not
dans un grenier qu’ on est a vingt ans, at least all the
world was before him and he had yet his place to
make, yet his success to dig out, when medals,
recompenses and the appreciation of prosperous
clients were unknown quantities. To those of us
who know him, his career is full of encouragement
and satisfaction in seeing hard work and honest
endeavour get some of its proper recognition.

HE EXHIBITION OF THE PENN-
SYLVANIA ACADEMY
BY DAVID LLOYD

also clearly defined. As compared
with the Academy show of last year
this one was marked by something
of a departure in aim. Gallery
space was cut down with a view of
making the collection more compact
and the impression of the whole
more unified. A jury was appointed
by the management, instead of by
the previous method, and rigid selec-
tion by the local juries was made
at all points. As a result of this
sifting process, the number of ex-
hibits, which was 643 last year,
came down to 477, and the number
of artists from 388 to 250, a reduc-
tion in either case of 26 and 36 per
cent. There is no question that the
resulting exhibition was thoroughly
interesting and creditable. But there
is the best of grounds for the opinion
that the 1906 exhibition was in as
many respects commendable. As
both were due to the enterprise and
enthusiasm of the same management
there is nothing invidious in the
comparison. The fact remains that
something like 138 artists seen last
year were not represented this year,
enough to make a tolerable exhibi-
tion by themselves. This principle
of exclusion is the old story in the
History of all art bodies. If its
present application denotes a leaning on the
part of the Academy towards a more definite
type of annual exhibition, the development will be
interesting. It certainly suggests a movement
away from the strictly general exhibition, which
aims to represent so far as possible the whole course
of the country’s art at the moment, in the direction
of nicer choice exercised with the courage of prefer-
ences. As other institutions are entering the field
and displaying a capacity for this kind of service,
the trend of the Academy becomes all the more
important a matter.
A development of the idea that took shape last
year in the room devoted to the work of a chosen
few, D. W. Tryon, T. W. Deming, Abbott H.
Thayer and Whistler, was carried a step further
by inviting a single artist to fill one gallery. The
man selected for this honour was Gari Melchers,

A high level characterised the io2d
exhibition of the Pennsylvania Academy of the Fine
Arts in Philadelphia. The range of interest was

who returns from his sojourn abroad with an
assured position and fame. His gallery contained
nineteen pictures, several of them loaned for the