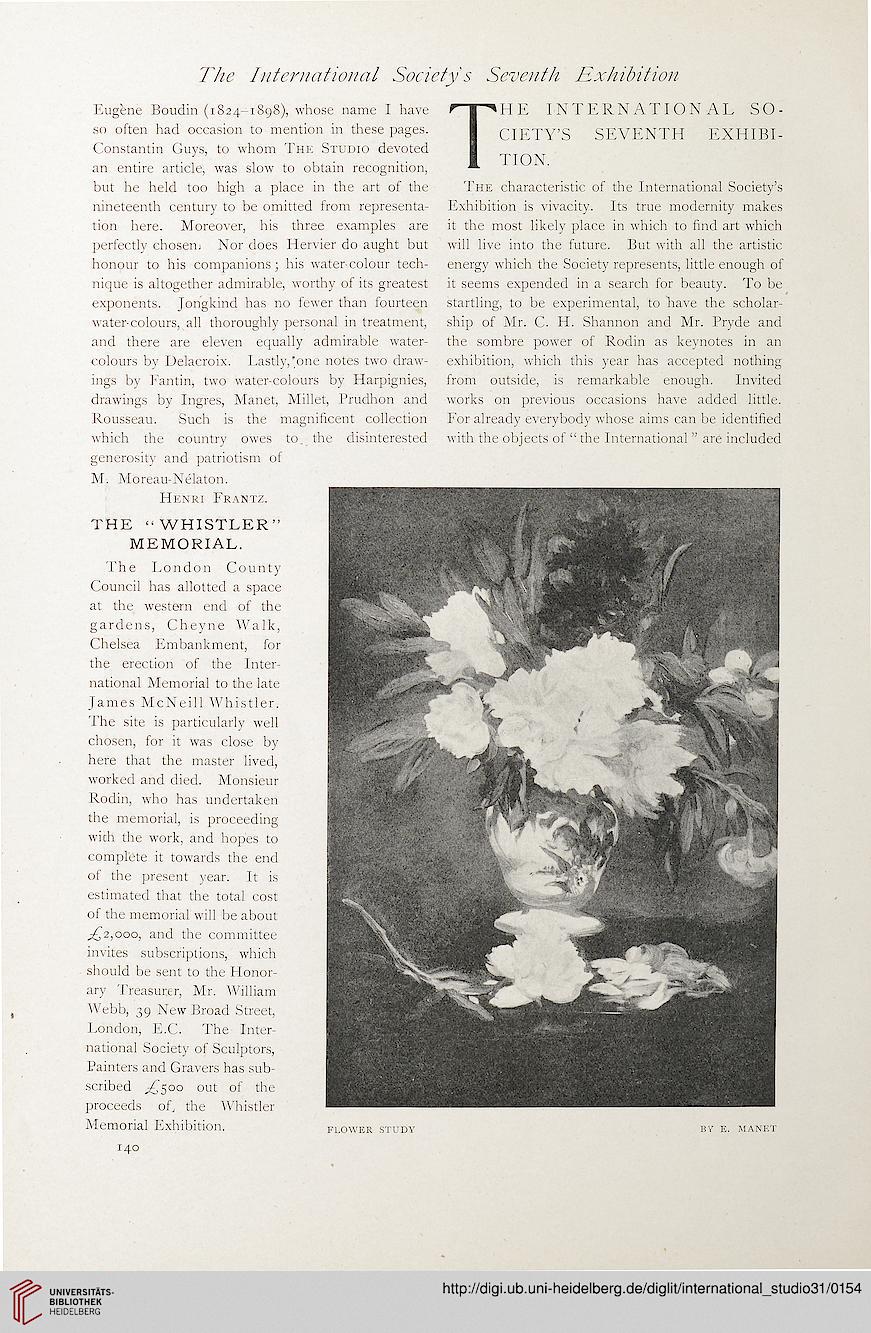 Eugene Boudin (1824-1898), whose name I have
so often had occasion to mention in these pages.
Constantin Guys, to whom The Studio devoted
an entire article, was slow to obtain recognition,
but he held too high a place in the art of the
nineteenth century to be omitted from representa-
tion here. Moreover, his three examples are
perfectly chosen; Nor does Hervier do aught but
honour to his companions; his water-colour tech-
nique is altogether admirable, worthy of its greatest
exponents. Jongkind has no fewer than fourteen
water-colours, all thoroughly personal in treatment,
and there are eleven equally admirable water-
colours by Delacroix. Lastly,’one notes two draw-
ings by Fantin, two water-colours by Harpignies,
drawings by Ingres, Manet, Millet, Prudhon and
Rousseau. Such is the magnificent collection
which the country owes to. the disinterested
generosity and patriotism of
M. Moreau-Nelaton.
Henri Frantz.
THE “WHISTLER”
MEMORIAL.
The London County
Council has allotted a space
at the western end of the
gardens, Cheyne Walk,
Chelsea Embankment, for
the erection of the Inter-
national Memorial to the late
James McNeill Whistler.
The site is particularly well
chosen, for it was close by
here that the master lived,
worked and died. Monsieur
Rodin, who has undertaken
the memorial, is proceeding
widi the work, and hopes to
complete it towards the end
of the present year. It is
estimated that the total cost
of the memorial will be about
,£2,000, and the committee
invites subscriptions, which
should be sent to the Honor-
ary Treasurer, Mr. William
Webb, 39 New Broad Street,
London, E.C. The Inter-
national Society of Sculptors,
Painters and Gravers has sub-
scribed T500 out of the
proceeds of, the Whistler
Memorial Exhibition.

The international so-
ciety’s SEVENTH EXHIBI-
TION.
The characteristic of the International Society’s
Exhibition is vivacity. Its true modernity makes
it the most likely place in which to find art which
will live into the future. But with all the artistic
energy which the Society represents, little enough of
it seems expended in a search for beauty. To be
startling, to be experimental, to have the scholar-
ship of Mr. C. H. Shannon and Mr. Pryde and
the sombre power of Rodin as keynotes in an
exhibition, which this year has accepted nothing
from outside, is remarkable enough. Invited
works on previous occasions have added little.
For already everybody whose aims can be identified
with the objects of “ the International ” are included