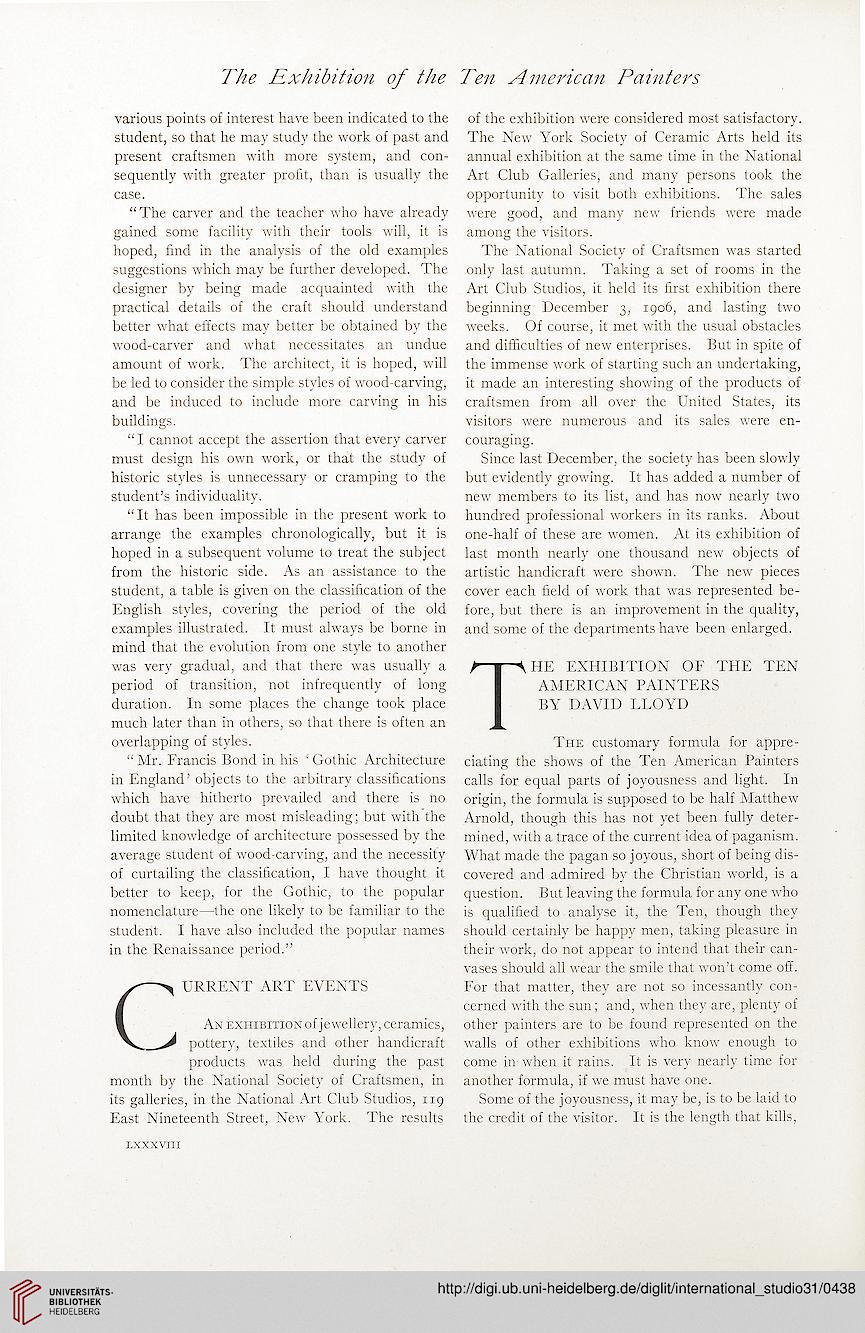 Information about OCR text
The Exhibition of the Ten American Painters

various points of interest have been indicated to the
student, so that he may study the work of past and
present craftsmen with more system, and con-
sequently with greater profit, than is usually the
case.
“The carver and the teacher who have already
gained some facility with their tools will, it is
hoped, find in the analysis of the old examples
suggestions which may be further developed. The
designer by being made acquainted with the
practical details of the craft should understand
better what effects may better be obtained by the
wood-carver and what necessitates an undue
amount of work. The architect, it is hoped, will
be led to consider the simple styles of wood-carving,
and be induced to include more carving in his
buildings.
“ I cannot accept the assertion that every carver
must design his own work, or that the study of
historic styles is unnecessary or cramping to the
student’s individuality.
“It has been impossible in the present work to
arrange the examples chronologically, but it is
hoped in a subsequent volume to treat the subject
from the historic side. As an assistance to the
student, a table is given on the classification of the
English styles, covering the period of the old
examples illustrated. It must always be borne in
mind that the evolution from one style to another
was very gradual, and that there was usually a
period of transition, not infrequently of long
duration. In some places the change took place
much later than in others, so that there is often an
overlapping of styles.
“ Mr. Francis Bond in his ‘ Gothic Architecture
in England’ objects to the arbitrary classifications
which have hitherto prevailed and there is no
doubt that they are most misleading; but with the
limited knowledge of architecture possessed by the
average student of wood-carving, and the necessity
of curtailing the classification, I have thought it
better to keep, for the Gothic, to the popular
nomenclature—the one likely to be familiar to the
student. I have also included the popular names
in the Renaissance period.”

CURRENT ART EVENTS
An exhibition of jewellery, ceramics,
pottery, textiles and other handicraft
products was held during the past
month by the National Society of Craftsmen, in
its galleries, in the National Art Club Studios, 119
East Nineteenth Street, New York. The results

of the exhibition were considered most satisfactory.
The New York Society of Ceramic Arts held its
annual exhibition at the same time in the National
Art Club Galleries, and many persons took the
opportunity to visit both exhibitions. The sales
were good, and many new friends were made
among the visitors.
The National Society of Craftsmen was started
only last autumn. Taking a set of rooms in the
Art Club Studios, it held its first exhibition there
beginning December 3, 1906, and lasting two
weeks. Of course, it met with the usual obstacles
and difficulties of new enterprises. But in spite of
the immense work of starting such an undertaking,
it made an interesting showing of the products of
craftsmen from all over the United States, its
visitors were numerous and its sales were en-
couraging.
Since last December, the society has been slowly
but evidently growing. It has added a number of
new members to its list, and has now nearly two
hundred professional workers in its ranks. About
one-half of these are women. At its exhibition of
last month nearly one thousand new objects of
artistic handicraft were shown. The new pieces
cover each field of work that was represented be-
fore, but there is an improvement in the quality,
and some of the departments have been enlarged.
The exhibition of the ten
AMERICAN PAINTERS
BY DAVID LLOYD
The customary formula for appre-
ciating the shows of the Ten American Painters
calls for equal parts of joyousness and light. In
origin, the formula is supposed to be half Matthew
Arnold, though this has not yet been fully deter-
mined, with a trace of the current idea of paganism.
What made the pagan so joyous, short of being dis-
covered and admired by the Christian world, is a
question. But leaving the formula for any one who
is qualified to analyse it, the Ten, though they
should certainly be happy men, taking pleasure in
their work, do not appear to intend that their can-
vases should all wear the smile that won’t come off.
For that matter, they are not so incessantly con-
cerned with the sun; and, when they are, plenty of
other painters are to be found represented on the
walls of other exhibitions who know enough to
come in when it rains. It is very nearly time for
another formula, if we must have one.
Some of the joyousness, it may be, is to be laid to
the credit of the visitor. It is the length that kills,