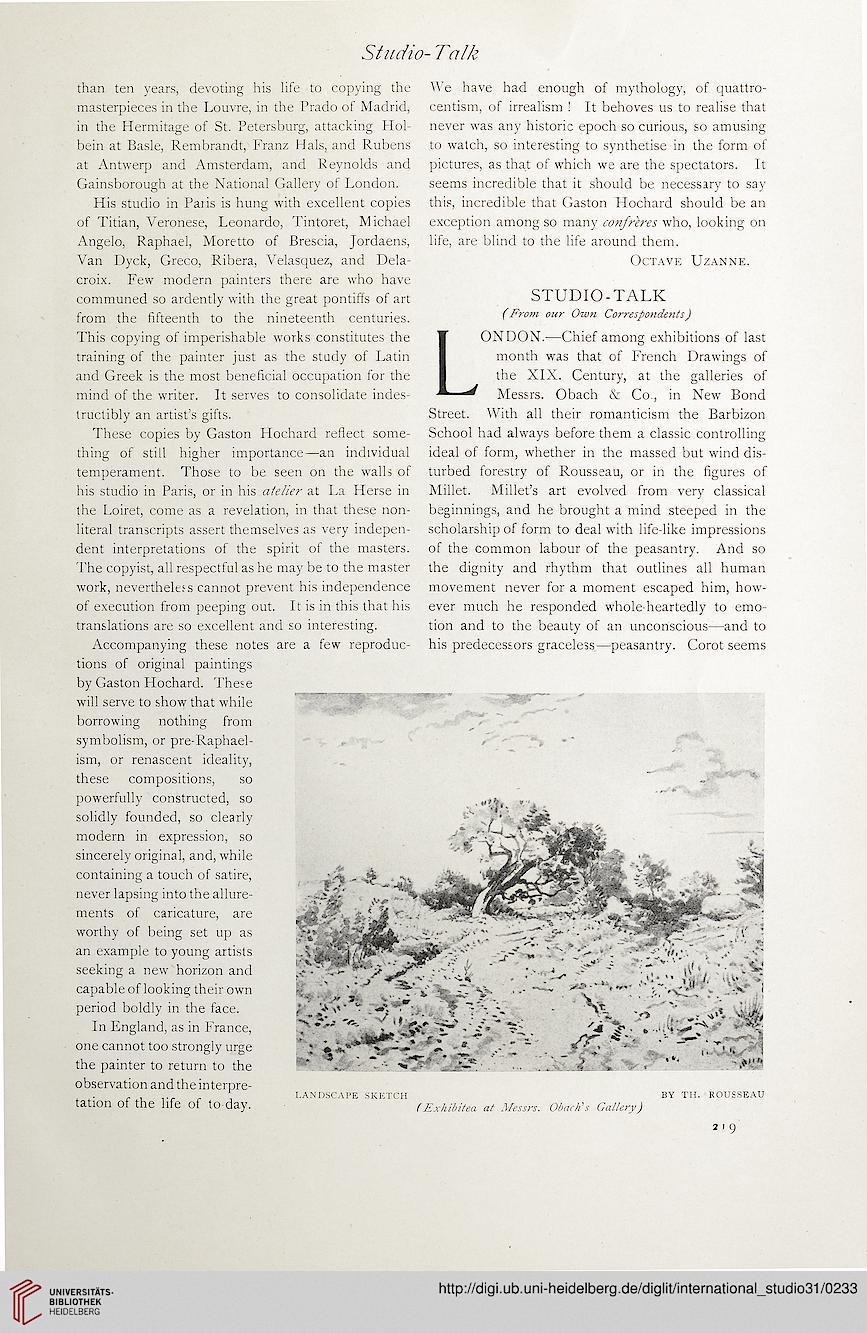 than ten years, devoting his life to copying the
masterpieces in the Louvre, in the Prado of Madrid,
in the Hermitage of St. Petersburg, attacking Hol-
bein at Basle, Rembrandt, Franz Hals, and Rubens
at Antwerp and Amsterdam, and Reynolds and
Gainsborough at the National Gallery of London.
His studio in Palis is hung with excellent copies
of Titian, Veronese, Leonardo, Tintoret, Michael
Angelo, Raphael, Moretto of Brescia, Jordaens,
Van Dyck, Greco, Ribera, Velasquez, and Dela-
croix. Few modern painters there are who have
communed so ardently with the great pontiffs of art
from the fifteenth to the nineteenth centuries.
This copying of imperishable works constitutes the
training of the painter just as the study of Latin
and Greek is the most beneficial occupation for the
mind of the writer. It serves to consolidate indes-
tructibly an artist’s gifts.
These copies by Gaston Hochard reflect some-
thing of still higher importance—an individual
temperament. Those to be seen on the walls of
his studio in Paris, or in his atelier at La Herse in
the Loiret, come as a revelation, in that these non-
literal transcripts assert themselves as very indepen-
dent interpretations of the spirit of the masters.
The copyist, all respectful as he may be to the master
work, nevertheless cannot prevent his independence
of execution from peeping out. It is in this that his
translations are so excellent and so interesting.
Accompanying these notes are a few reproduc-
tions of original paintings
by Gaston Hochard. These
will serve to show that while
borrowing nothing from
symbolism, or pre-Raphael-
ism, or renascent ideality,
these compositions, so
powerfully constructed, so
solidly founded, so clearly
modern in expression, so
sincerely original, and, while
containing a touch of satire,
never lapsing into the allure-
ments of caricature, are
worthy of being set up as
an example to young artists
seeking a new horizon and
capable of looking their own
period boldly in the face.
In England, as in France,
one cannot too strongly urge
the painter to return to the
observation and the interpre-
tation of the life of to day.

We have had enough of mythology, of quattro-
centism, of irrealism ! It behoves us to realise that
never wras any historic epoch so curious, so amusing
to watch, so interesting to synthetise in the form of
pictures, as that of which we are the spectators. It
seems incredible that it should be necessary to say
this, incredible that Gaston Hochard should be an
exception among so many confreres who, looking on
life, are blind to the life around them.
Octave Uzanne.

STUDIO-TALK
(From our Own Correspondents)
ON DON.—Chief among exhibitions of last
month was that of French Drawings of
the XIX. Century, at the galleries of
Messrs. Obach & Co., in New Bond
Street. With all their romanticism the Barbizon
School had always before them a classic controlling
ideal of form, whether in the massed but wind dis-
turbed forestry of Rousseau, or in the figures of
Millet. Millet’s art evolved from very classical
beginnings, and he brought a mind steeped in the
scholarship of form to deal with life-like impressions
of the common labour of the peasantry. And so
the dignity and rhythm that outlines all human
movement never for a moment escaped him, how-
ever much he responded whole-heartedly to emo-
tion and to the beauty of an unconscious—and to
his predecessors graceless—peasantry. Corot seems