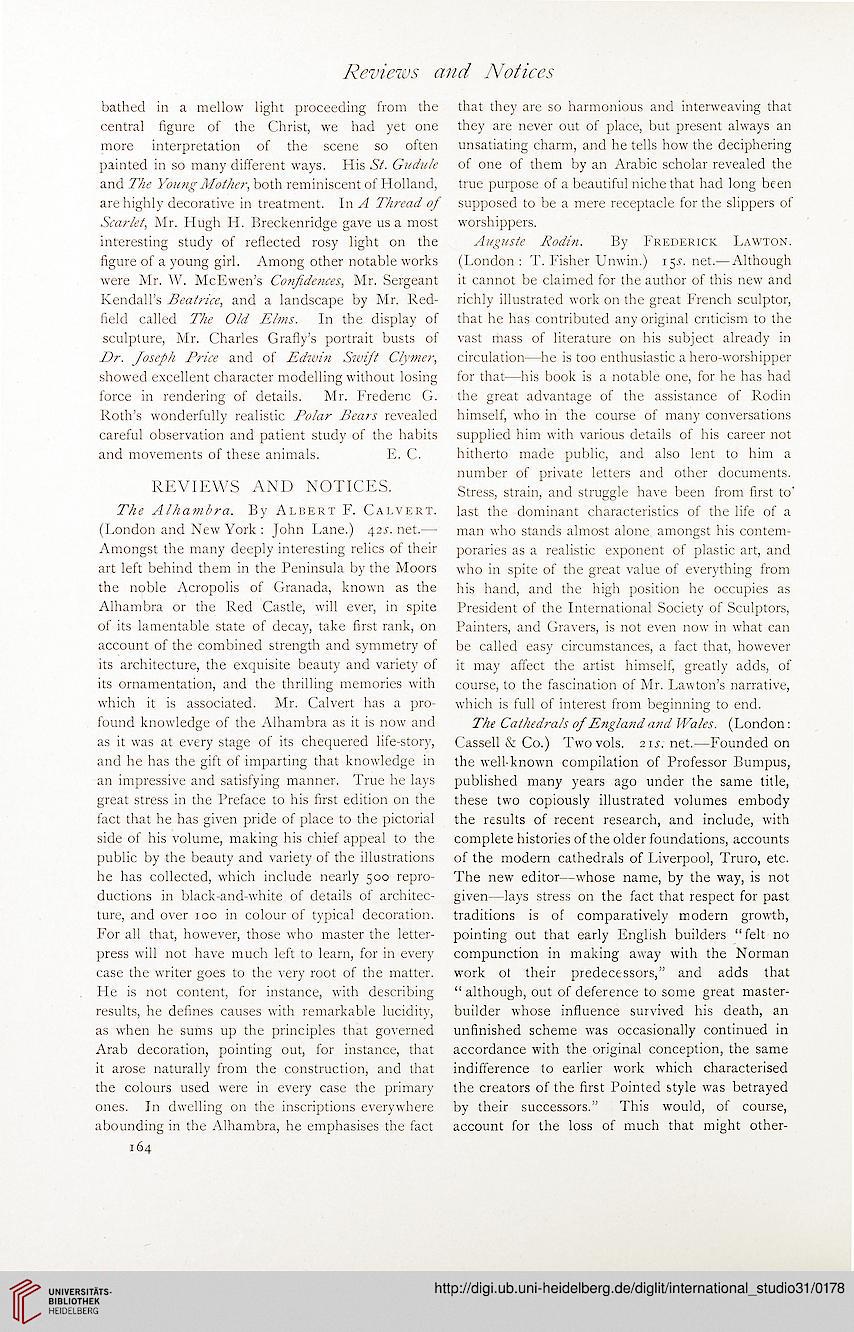 bathed in a mellow light proceeding from the
central figure of the Christ, we had yet one
more interpretation of the scene so often
painted in so many different ways. His St. Gudule
and The Young Mother, both reminiscent of Holland,
are highly decorative in treatment. In A Thread of
Scarlet, Mr. Hugh H. Breckenridge gave us a most
interesting study of reflected rosy light on the
figure of a young girl. Among other notable works
were Mr. W. McEwen’s Confidences, Mr. Sergeant
Kendall’s Beatrice, and a landscape by Mr. Red-
field called The Old Elms. In the display of
sculpture, Mr. Charles Grafly’s portrait busts of
Dr. Joseph Price and of Edwin Swift Clymer,
showed excellent character modelling without losing
force in rendering of details. Mr. Frederic G.
Roth’s wonderfully realistic Polar Bears revealed
careful observation and patient study of the habits
and movements of these animals. E. C.
REVIEWS AND NOTICES.
The Alhambra. By Albert F. Calvert.
(London and New York : John Lane.) 42s. net.—■
Amongst the many deeply interesting relics of their
art left behind them in the Peninsula by the Moors
the noble Acropolis of Granada, known as the
Alhambra or the Red Castle, will ever, in spite
of its lamentable state of decay, take first rank, on
account of the combined strength and symmetry of
its architecture, the exquisite beauty and variety of
its ornamentation, and the thrilling memories with
which it is associated. Mr. Calvert has a pro-
found knowledge of the Alhambra as it is now and
as it was at every stage of its chequered life-story,
and he has the gift of imparting that knowledge in
an impressive and satisfying manner. True he lays
great stress in the Preface to his first edition on the
fact that he has given pride of place to the pictorial
side of his volume, making his chief appeal to the
public by the beauty and variety of the illustrations
he has collected, which include nearly 500 repro-
ductions in black-and-white of details of architec-
ture, and over 100 in colour of typical decoration.
For all that, however, those who master the letter-
press will not have much left to learn, for in every
case the writer goes to the very root of the matter.
He is not content, for instance, with describing
results, he defines causes with remarkable lucidity,
as when he sums up the principles that governed
Arab decoration, pointing out, for instance, that
it arose naturally from the construction, and that
the colours used were in every case the primary
ones. In dwelling on the inscriptions everywhere
abounding in the Alhambra, he emphasises the fact
164

that they are so harmonious and interweaving that
they are never out of place, but present always an
unsatiating charm, and he tells how the deciphering
of one of them by an Arabic scholar revealed the
true purpose of a beautiful niche that had long been
supposed to be a mere receptacle for the slippers of
worshippers.
Auguste Rodin. By Frederick Lawton.
(London : T. Fisher Unwin.) 155. net.— Although
it cannot be claimed for the author of this new and
richly illustrated work on the great French sculptor,
that he has contributed any original criticism to the
vast mass of literature on his subject already in
circulation—he is too enthusiastic a hero-worshipper
for that—his book is a notable one, for he has had
the great advantage of the assistance of Rodin
himself, who in the course of many conversations
supplied him with various details of his career not
hitherto made public, and also lent to him a
number of private letters and other documents.
Stress, strain, and struggle have been from first to'
last the dominant characteristics of the life of a
man who stands almost alone amongst his contem-
poraries as a realistic exponent of plastic art, and
who in spite of the great value of everything from
his hand, and the high position he occupies as
President of the International Society of Sculptors,
Painters, and Gravers, is not even now in what can
be called easy circumstances, a fact that, however
it may affect the artist himself, greatly adds, of
course, to the fascination of Mr. Lawton’s narrative,
which is full of interest from beginning to end.
The Cathedrals of England and Wales. (London:
Cassell & Co.) Twovols. 21 s. net.-—Founded on
the well-known compilation of Professor Bumpus,
published many years ago under the same title,
these two copiously illustrated volumes embody
the results of recent research, and include, with
complete histories of the older foundations, accounts
of the modern cathedrals of Liverpool, Truro, etc.
The new editor—whose name, by the way, is not
given—lays stress on the fact that respect for past
traditions is of comparatively modern growth,
pointing out that early English builders “felt no
compunction in making away with the Norman
work ot their predecessors,” and adds that
“ although, out of deference to some great master-
builder whose influence survived his death, an
unfinished scheme was occasionally continued in
accordance with the original conception, the same
indifference to earlier work which characterised
the creators of the first Pointed style was betrayed
by their successors.” This would, of course,
account for the loss of much that might other-