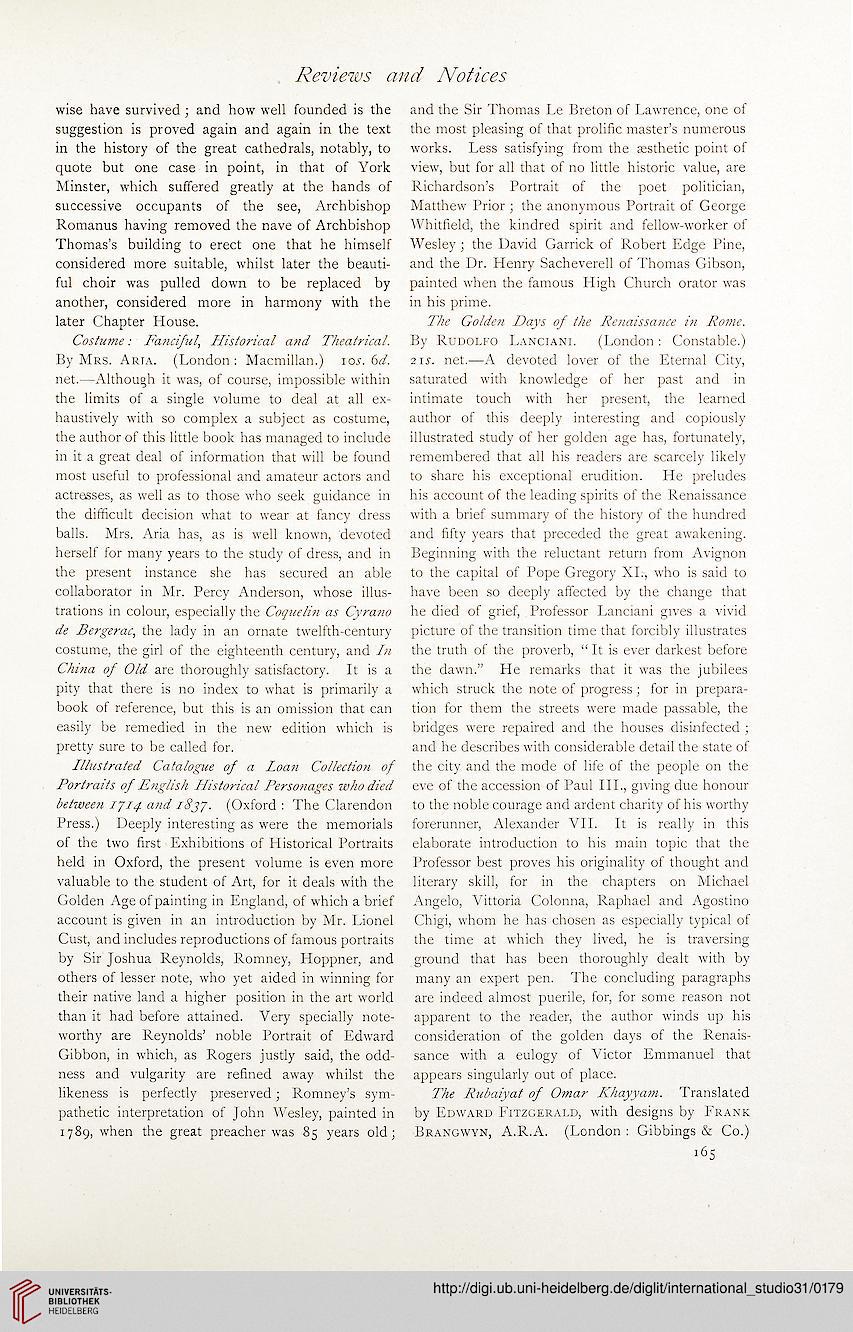 wise have survived ; and how well founded is the
suggestion is proved again and again in the text
in the history of the great cathedrals, notably, to
quote but one case in point, in that of York
Minster, which suffered greatly at the hands of
successive occupants of the see, Archbishop
Romanus having removed the nave of Archbishop
Thomas’s building to erect one that he himself
considered more suitable, whilst later the beauti-
ful choir was pulled down to be replaced by
another, considered more in harmony with the
later Chapter House.
Costume: Fanciful,, Historical and Theatrical.
By Mrs. Aria. (London : Macmillan.) ios. 6d.
net.—Although it was, of course, impossible within
the limits of a single volume to deal at all ex-
haustively with so complex a subject as costume,
the author of this little book has managed to include
in it a great deal of information that will be found
most useful to professional and amateur actors and
actresses, as well as to those who seek guidance in
the difficult decision what to wear at fancy dress
balls. Mrs. Aria has, as is wrell known, devoted
herself for many years to the study of dress, and in
the present instance she has secured an able
collaborator in Mr. Percy Anderson, whose illus-
trations in colour, especially the Coquelin as Cyrano
de Bergerac, the lady in an ornate twelfth-century
costume, the girl of the eighteenth century, and In
China of Old are thoroughly satisfactory. It is a
pity that there is no index to what is primarily a
book of reference, but this is an omission that can
easily be remedied in the new edition which is
pretty sure to be called for.
Illustrated Catalogue of a loan Collection of
Portraits of English Historical Personages who died
between 1714 and 1837. (Oxford : The Clarendon
Press.) Deeply interesting as were the memorials
of the two first Exhibitions of Historical Portraits
held in Oxford, the present volume is even more
valuable to the student of Art, for it deals with the
Golden Age of painting in England, of which a brief
account is given in an introduction by Mr. Lionel
Cust, and includes reproductions of famous portraits
by Sir Joshua Reynolds, Romney, Hoppner, and
others of lesser note, who yet aided in winning for
their native land a higher position in the art world
than it had before attained. Very specially note-
worthy are Reynolds’ noble Portrait of Edward
Gibbon, in which, as Rogers justly said, the odd-
ness and vulgarity are refined away whilst the
likeness is perfectly preserved; Romney’s sym-
pathetic interpretation of John Wesley, painted in
1789, when the great preacher was 85 years old;

and the Sir Thomas Le Breton of Lawrence, one of
the most pleasing of that prolific master’s numerous
works. Less satisfying from the aesthetic point of
view, but for all that of no little historic value, are
Richardson’s Portrait of the poet politician,
Matthew Prior ; the anonymous Portrait of George
Whitfield, the kindred spirit and fellow-worker of
Wesley ; the David Garrick of Robert Edge Pine,
and the Dr. Henry Sacheverell of Thomas Gibson,
painted when the famous High Church orator was
in his prime.
The Golden Days of the Renaissance in Rome.
By Rudolfo Lanciani. (London : Constable.)
2ii'. net.—A devoted lover of the Eternal City,
saturated with knowledge of her past and in
intimate touch with her present, the learned
author of this deeply interesting and copiously
illustrated study of her golden age has, fortunately,
remembered that all his readers are scarcely likely
to share his exceptional erudition. He preludes
his account of the leading spirits of the Renaissance
with a brief summary of the history of the hundred
and fifty years that preceded the great awakening.
Beginning with the reluctant return from Avignon
to the capital of Pope Gregory XI., who is said to
have been so deeply affected by the change that
he died of grief, Professor Lanciani gives a vivid
picture of the transition time that forcibly illustrates
the truth of the proverb, “ It is ever darkest before
the dawn.” He remarks that it was the jubilees
which struck the note of progress; for in prepara-
tion for them the streets were made passable, the
bridges were repaired and the houses disinfected ;
and he describes with considerable detail the state of
the city and the mode of life of the people on the
eve of the accession of Paul III., giving due honour
to the noble courage and ardent charity of his worthy
forerunner, Alexander VII. It is really in this
elaborate introduction to his main topic that the
Professor best proves his originality of thought and
literary skill, for in the chapters on Michael
Angelo, Vittoria Colonna, Raphael and Agostino
Chigi, whom he has chosen as especially typical of
the time at which they lived, he is traversing
ground that has been thoroughly dealt with by
many an expert pen. The concluding paragraphs
are indeed almost puerile, for, for some reason not
apparent to the reader, the author winds up his
consideration of the golden days of the Renais-
sance with a eulogy of Victor Emmanuel that
appears singularly out of place.
The Rubaiyat of Omar Khayyam. Translated
by Edward Fitzgerald, with designs by Frank
Brangwyn, A.R.A. (London : Gibbings & Co.)
165