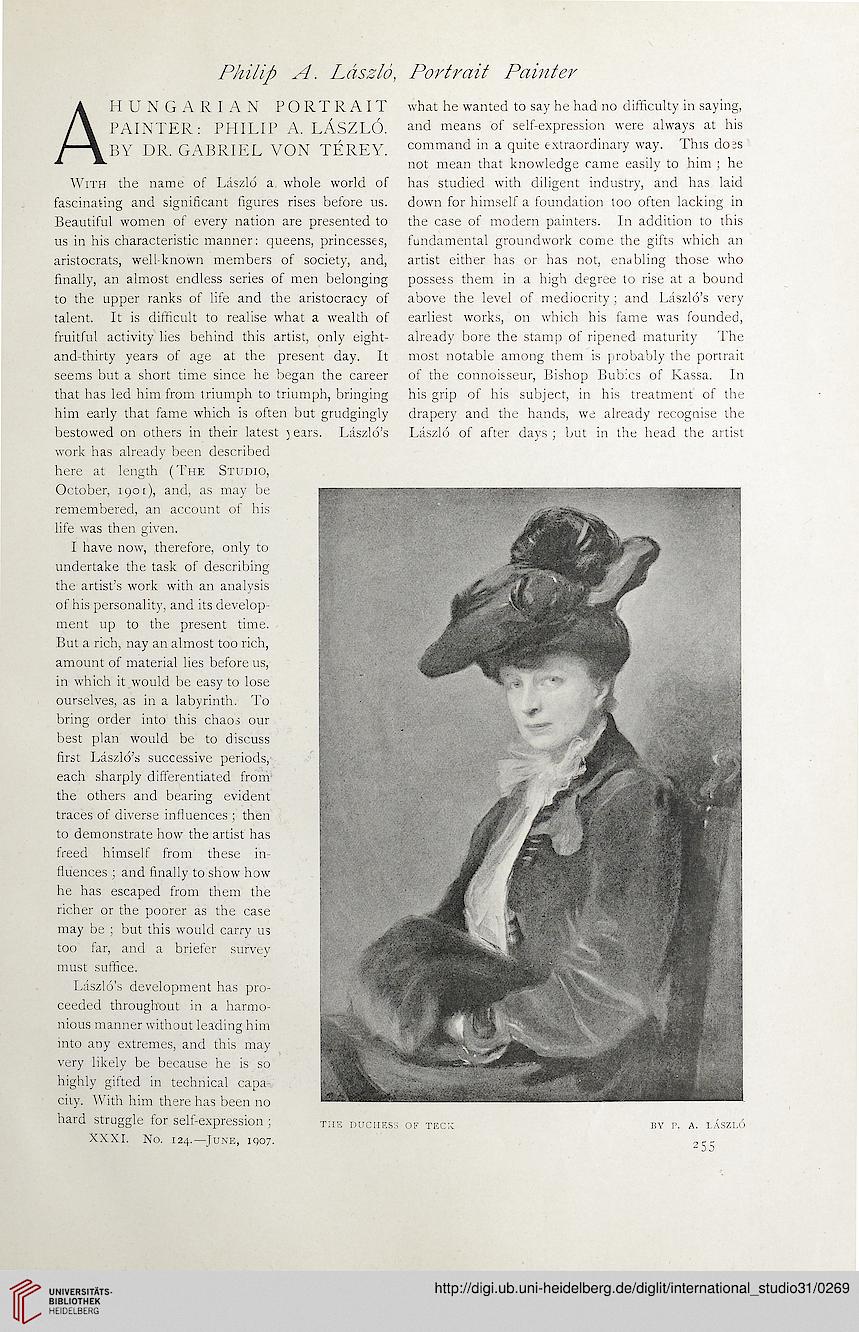 A HUNGARIAN PORTRAIT
PAINTER: PHILIP A. LASZLO.
BY DR. GABRIEL VON TEREY.
With the name of Laszlo a whole world of
fascinating and significant figures rises before us.
Beautiful women of every nation are presented to
us in his characteristic manner: queens, princesses,
aristocrats, well-known members of society, and,
finally, an almost endless series of men belonging
to the upper ranks of life and the aristocracy of
talent. It is difficult to realise what a wealth of
fruitful activity lies behind this artist, only eight-
and-thirty years of age at the present day. It
seems but a short time since he began the career
that has led him from triumph to triumph, bringing
him early that fame which is often but grudgingly
bestowed on others in their latest 3 ears. Laszlo’s
work has already been described
here at length (The Studio,
October, 1901), and, as may be
remembered, an account of his
life was then given.
I have now, therefore, only to
undertake the task of describing
the artist’s work with an analysis
of his personality, and its develop-
ment up to the present time.
But a rich, nay an almost too rich,
amount of material lies before us,
in which it would be easy to lose
ourselves, as in a labyrinth. To
bring order into this chaos our
best plan would be to discuss
first Laszlo’s successive periods,
each sharply differentiated from
the others and bearing evident
traces of diverse influences ; then
to demonstrate how the artist has
freed himself from these in-
fluences ; and finally to show how
he has escaped from them the
richer or the poorer as the case
may be ; but this would carry us
too far, and a briefer survey
must suffice.
Laszlo’s development has pro-
ceeded throughout in a harmo-
nious manner without leading him
into any extremes, and this may
very likely be because he is so
highly gifted in technical capa-
city. With him there has been no
hard struggle for self-expression ;
XXXI. No. 124.—June, 1907.

what he wanted to say he had no difficulty in saying,
and means of self-expression were always at his
command in a quite extraordinary way. This does
not mean that knowledge came easily to him 3 he
has studied with diligent industry, and has laid
down for himself a foundation too often lacking in
the case of modern painters. In addition to this
fundamental groundwork come the gifts which an
artist either has or has not, enabling those who
possess them in a high degree to rise at a bound
above the level of mediocrity; and Laszlo’s very
earliest works, on which his fame was founded,
already bore the stamp of ripened maturity The
most notable among them is probably the portrait
of the connoisseur, Bishop Bubics of Kassa. In
his grip of his subject, in his treatment of the
drapery and the hands, we already recognise the
Laszlo of after days ; but in the head the artist