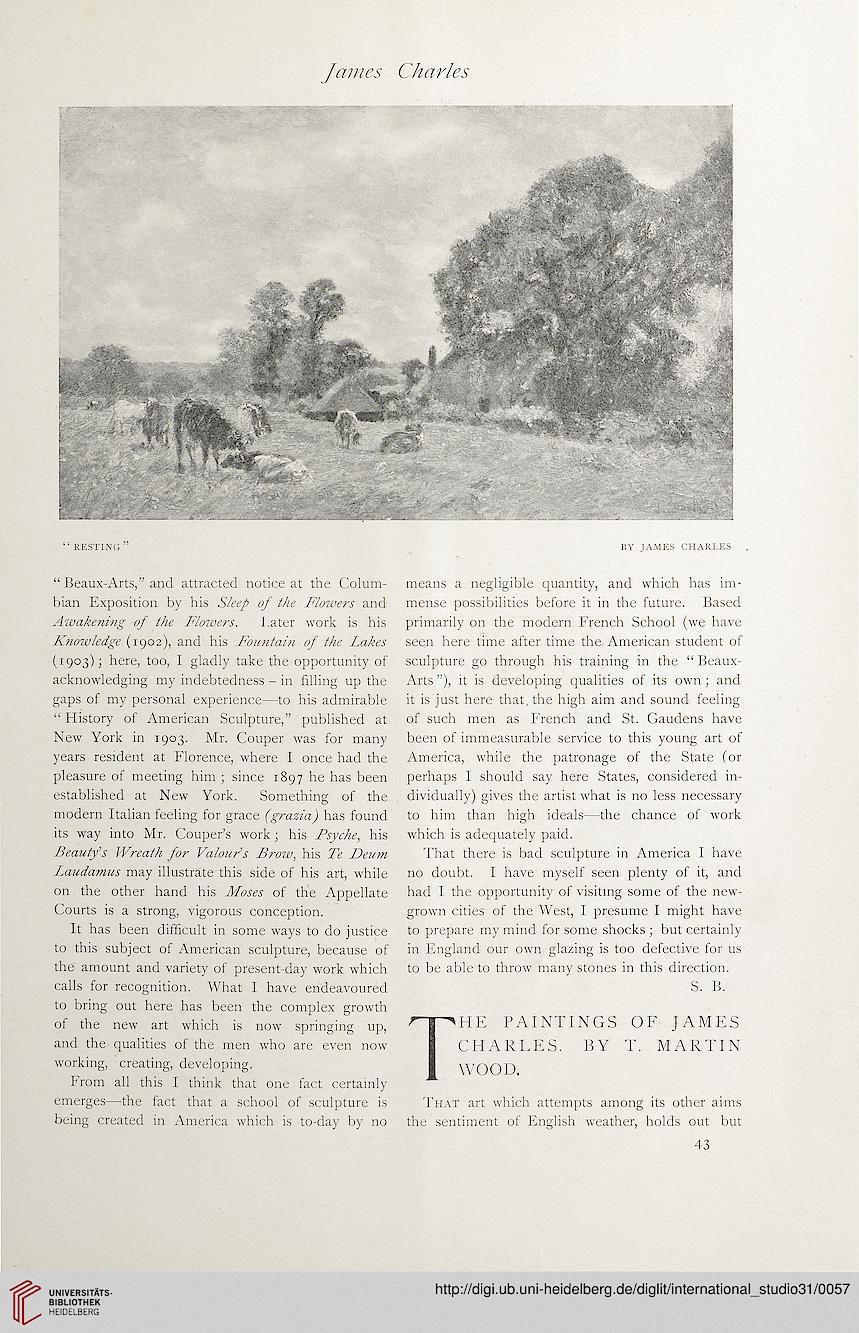 
“ RESTING”
“ Beaux-Arts,” and attracted notice at the Colum-
bian Exposition by his Sleep of the Flowers and
Awakening of the Flowers. Later work is his
Knowledge (1902), and his Fountain of the Lakes
(1903); here, too, I gladly take the opportunity of
acknowledging my indebtedness - in filling up the
gaps of my personal experience—to his admirable
“ History of American Sculpture,” published at
New York in 1903. Mr. Couper was for many
years resident at Florence, where I once had the
pleasure of meeting him ; since 1897 he has been
established at New York. Something of the
modern Italian feeling for grace (grazia) has found
its way into Mr. Couper’s work; his Psyche, his
Beauty's Wreath for Valour's Brow, his Te Deum
Laudamus may illustrate this side of his art, while
on the other hand his Moses of the Appellate
Courts is a strong, vigorous conception.
It has been difficult in some ways to do justice
to this subject of American sculpture, because of
the amount and variety of present-day work which
calls for recognition. What I have endeavoured
to bring out here has been the complex growth
of the new art which is now springing up,
and the qualities of the men who are even now
working, creating, developing.
From all this I think that one fact certainly
emerges—the fact that a school of sculpture is
being created in America which is to-day by no

BY JAMES CHARLES
means a negligible quantity, and which has im-
mense possibilities before it in the future. Based
primarily on the modern French School (we have
seen here time after time the American student of
sculpture go through his training in the “ Beaux-
Arts ”), it is developing qualities of its own; and
it is just here that, the high aim and sound feeling
of such men as French and St. Gaudens have
been of immeasurable service to this young art of
America, while the patronage of the State (or
perhaps I should say here States, considered in-
dividually) gives the artist what is no less necessary
to him than high ideals—the chance of work
which is adequately paid.
That there is bad sculpture in America I have
no doubt. I have myself seen plenty of it, and
had I the opportunity of visiting some of the new-
grown cities of the West, I presume I might have
to prepare my mind for some shocks ; but certainly
in England our own glazing is too defective for us
to be able to throw many stones in this direction.
S. B.
HE PAINTINGS OF JAMES
CHARLES. BY T. MARTIN
WOOD.
That art which attempts among its other aims
the sentiment of English weather, holds out but