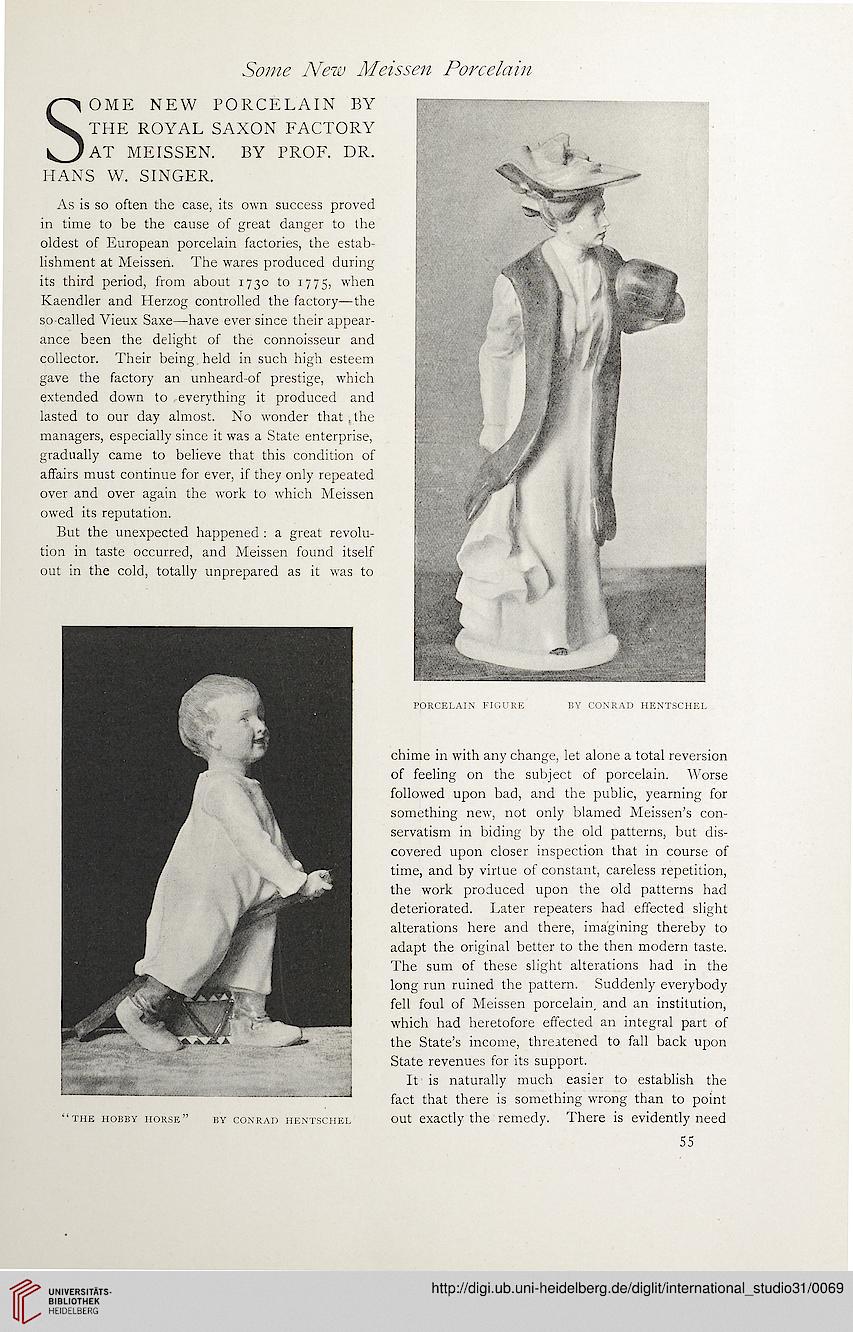 
“THE HOBBY horse” BY CONRAD HENTSCHEL

chime in with any change, let alone a total reversion
of feeling on the subject of porcelain. Worse
followed upon bad, and the public, yearning for
something new, not only blamed Meissen’s con-
servatism in biding by the old patterns, but dis-
covered upon closer inspection that in course of
time, and by virtue of constant, careless repetition,
the work produced upon the old patterns had
deteriorated. Later repeaters had effected slight
alterations here and there, imagining thereby to
adapt the original better to the then modern taste.
The sum of these slight alterations had in the
long run ruined the pattern. Suddenly everybody
fell foul of Meissen porcelain, and an institution,
which had heretofore effected an integral part of
the State’s income, threatened to fall back upon
State revenues for its support.
It is naturally much easier to establish the
fact that there is something wrong than to point
out exactly the remedy. There is evidently need
55

SOME NEW PORCELAIN BY
THE ROYAL SAXON FACTORY
AT MEISSEN. BY PROF. DR.
HANS W. SINGER.

As is so often the case, its own success proved
in time to be the cause of great danger to the
oldest of European porcelain factories, the estab-
lishment at Meissen. The wares produced during
its third period, from about 1730 to 1775, when
Kaendler and Herzog controlled the factory—the
so-called Vieux Saxe—have ever since their appear-
ance been the delight of the connoisseur and
collector. Their being held in such high esteem
gave the factory an unheard-of prestige, which
extended down to everything it produced and
lasted to our day almost. No wonder that,the
managers, especially since it was a State enterprise,
gradually came to believe that this condition of
affairs must continue for ever, if they only repeated
over and over again the work to which Meissen
owed its reputation.
But the unexpected happened : a great revolu-
tion in taste occurred, and Meissen found itself
out in the cold, totally unprepared as it was to