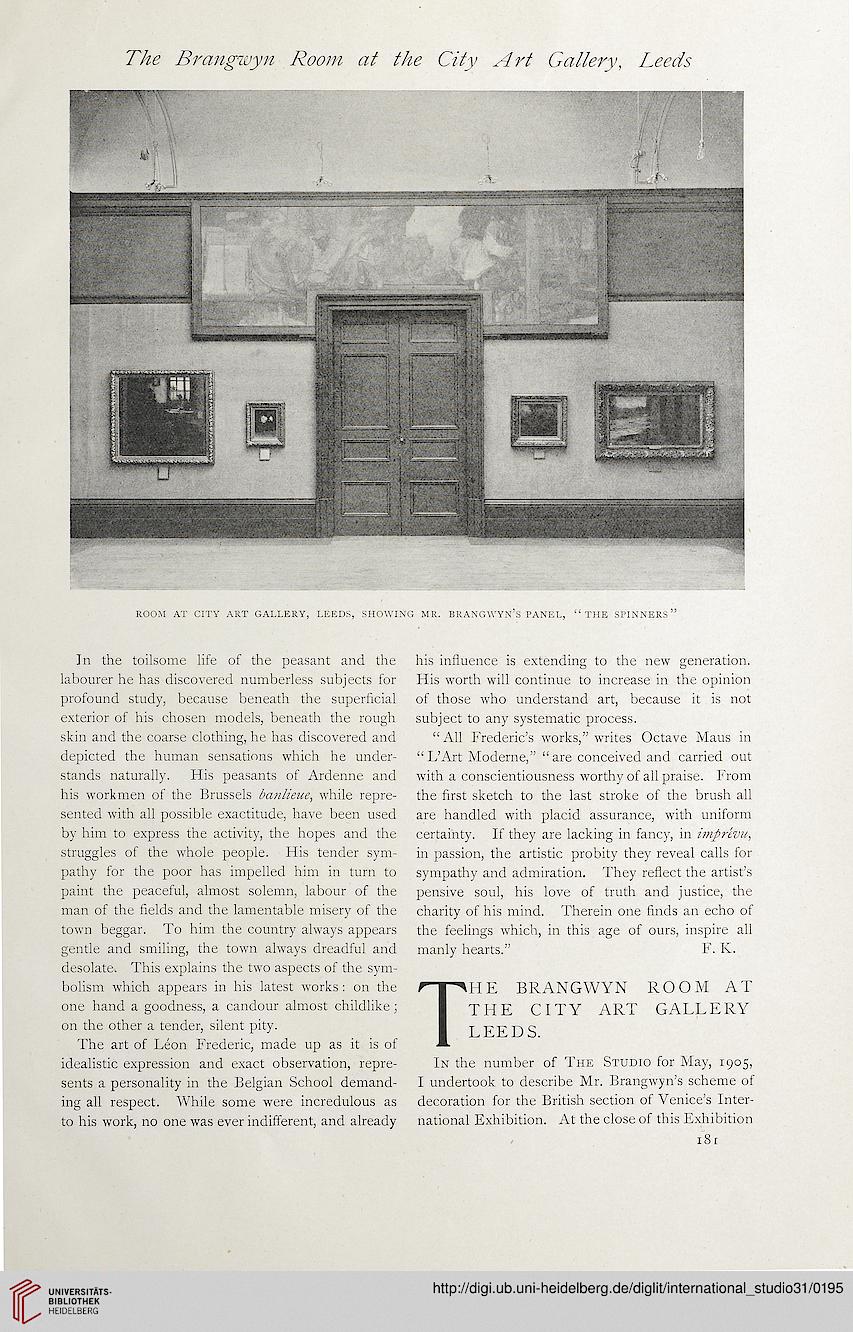 Information about OCR text
The Brangwyn Room at the City Art Galtery, Leeds

In the toilsome life of the peasant and the
labourer he has discovered numberless subjects for
profound study, because beneath the superficial
exterior of his chosen models, beneath the rough
skin and the coarse clothing, he has discovered and
depicted the human sensations which he under-
stands naturally. His peasants of Ardenne and
his workmen of the Brussels banlieue, while repre-
sented with all possible exactitude, have been used
by him to express the activity, the hopes and the
struggles of the whole people. His tender sym-
pathy for the poor has impelled him in turn to
paint the peaceful, almost solemn, labour of the
man of the fields and the lamentable misery of the
town beggar. To him the country always appears
gentle and smiling, the town always dreadful and
desolate. This explains the two aspects of the sym-
bolism which appears in his latest works: on the
one hand a goodness, a candour almost childlike;
on the other a tender, silent pity.
The art of Leon Frederic, made up as it is of
idealistic expression and exact observation, repre-
sents a personality in the Belgian School demand-
ing all respect. While some were incredulous as
to his work, no one was ever indifferent, and already

his influence is extending to the new generation.
His worth will continue to increase in the opinion
of those who understand art, because it is not
subject to any systematic process.
“All Frederic’s works,” writes Octave Maus in
“L’Art Moderne,” “are conceived and carried out
with a conscientiousness worthy of all praise. From
the first sketch to the last stroke of the brush all
are handled with placid assurance, with uniform
certainty. If they are lacking in fancy, in impr'tvu,
in passion, the artistic probity they reveal calls for
sympathy and admiration. They reflect the artist’s
pensive soul, his love of truth and justice, the
charity of his mind. Therein one finds an echo of
the feelings which, in this age of ours, inspire all
manly hearts.” F. K.
HE BRANGWYN ROOM AT
THE CITY ART GALLERY
LEEDS.
In the number of The Studio for May, 1905,
I undertook to describe Mr. Brangwyn’s scheme of
decoration for the British section of Venice’s Inter-
national Exhibition. At the close of this Exhibition